From the Heart of Liberty Plaza

A lot has changed since we started occupying Wall Street 24 days ago.
Voices take much longer to echo through the masses of bodies in Liberty Plaza,
requiring two or three layers of repetition via the people’s microphone. The kitchen
staff, once limited largely to serving the now-famous “occu-pie” pizzas (99% cheese,
1% pepperoni) lovingly designed by Libretto’s, are now cooking full-balanced, vegan
meals, composting the scraps, and washing the dishes through an on-site grey-water
system. The once-quaint library that started out as a few rejects from someone’s
bookshelf is now a full-blown, catalogued institution with sections ranging from
anarchism to acupuncture. Celebrities are coming down for the second, third, and
fourth visit not to make speeches, but to see how things are evolving. 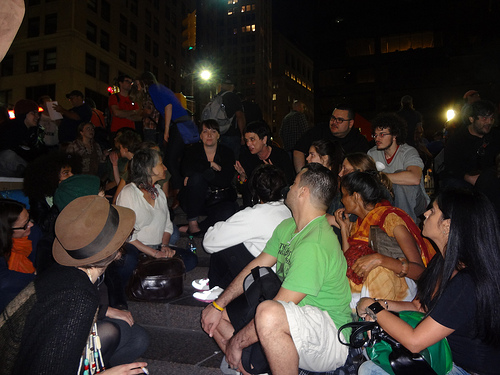 When Eve Ensler came down for a repeat visit on Saturday night she asked if I could
gather some people together to talk after the General Assembly. She and Naomi
Klein sat with us on the concrete for the entire General Assembly, patiently listening
to over two hours of working group report-backs, announcements, and general
housekeeping. When we finally gathered on the steps by the library, Eve asked for
ideas on how she could best support us. “Use your voice to say what you see,” said
one woman. “Tell people we’re not a bunch of patchouli-wearing hippies doing
hula hoops and dancing in a circle.” As everyone laughed, she quickly added, “there
is that, and it’s beautiful, but there’s also real process, there’s real community.” “I
have to say, more than I’ve seen anywhere” Eve said, nodding. Eve asked us to tell
her what brought us here. One woman said she had just wandered over to see what
was happening: “I’ve been trying to leave for the past four hours. Every step I take
there’s something amazing happening.” As other people shared their stories a plan
evolved to bring these “stories from the heart of the park” to a wider audience.

What Brought You Here?

When long-time activist and hip-hop/funk/reggae artist Michael Franti came to
Occupy Wall Street last week he told us “starting activism is easy – all you have to do
is show up. It’s coming back the second and third time that’s challenging.”

I showed up at one of the first General Assemblies back in August as skeptical
as anyone. Occupy Wall Street? Yeah, right. We all knew it was one of the most
militarized places in the city; we knew the plan for September 17th – made by
someone in another country who didn’t seem to know anyone here or have any
intention of actually participating in the demonstration – was all over the internet;
we knew the police would be ready for us. I sat on the concrete with over a hundred
students, workers, artists, teachers, organizers, passers-by, for what seemed like
an eternity grappling our way towards some kind of agreement, structure, process,
ANYTHING that would get us closer to preparing for September 17th.

There were debates about what should be on the agenda, who should take down the agenda points, when the agenda should be formed, and whether we should even HAVE an
agenda. It was painfully – even comically – slow. It was clumsy, frustrating, ad-hoc,
and incredibly exciting. Everything about that night felt different. The faces were
new. The energy was new. We were thinking out loud. We were stumbling. We were
feeding off each other. We were learning. When I went home around midnight there
were still plenty of people milling around, forming working groups, talking and
sharing food. We were beginning to build a community.

Every day of the first week of the encampment at Liberty Plaza was filled with
the excitement that this was really happening; every day in the space was lived
with the feeling that it could be our last. The Occupy Wall Street community
survived many tests that first week – torrential downpours, dwindling numbers,
people dropping out due to illness and fatigue, and of course, constant police
violence and intimidation. As @occupywallstreet tweeted:

Building community at #OccupyWallStreet is hard, esp. when facing constant eviction threats. Now we know how so many Americans feel.

On the one-week anniversary of Liberty Plaza I watched the heart of the park galvanize before me. After the police attacked and pepper-sprayed protesters at Union Square and followed us down to our home at Liberty Plaza, we all prepared for a showdown. Paddy-wagons lined the streets. Hundreds of police officers lined the perimeter of the park, their hands poised on guns, orange nets, and reams of zip-ties that hurt my wrists just to look at. We gathered for a General Assembly (GA), as we do every evening, in a unified, determined group under an intense cloud of imminent danger, and asserted that we were not afraid. We developed contingency plans for when the police swept the square. 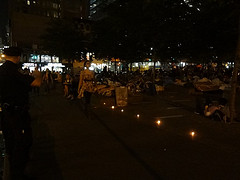 People lined the park with candles, creating a buffer-zone between the police and our central organ, the GA. Drums and brass instruments filled the air with an upbeat yet unavoidably ominous tone I somehow imagined accompanying the Titanic’s final hours.

Messages on the projector screen read “Love is the New Fear.” “Feeling good.” “We shall not be moved.” “In it for the long haul.” 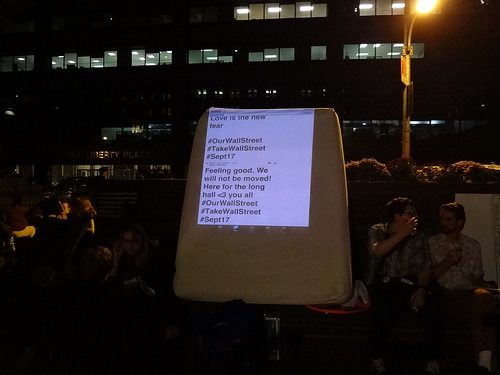 Older activists from CODEPINK and the anti-war community checked in or came by to see what was happening – asking, but not telling, what we were going to do. “We’re staying,” I told them. Some lingered on the outskirts like guardian angels, patiently, silently watching. “We’ve got your back.” The Occupy Wall Street bike bloc slowly circled the square in solidarity. “We are watching. We are with you.” I armed myself with a hot pink “Make Solidarity Not War” sign to go with the “Make Bikes Not War” signs adorning my bike and joined them to burn off nervous energy. 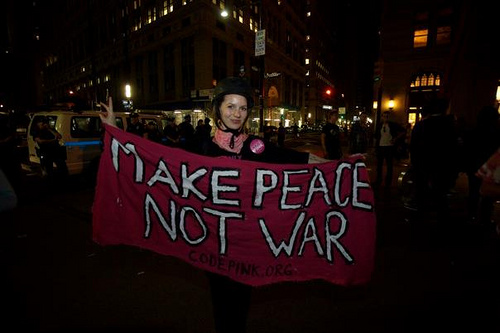 Putting on a brave face, I told the bloc how a cashier at a nearby cafe refused to
charge me for my sandwich earlier that day when she found out I was part of the
demonstration. Other cyclists chimed in with similar stories. One guy struck up a
conversation about what we were doing while in line for the bathroom at McDonalds and when he came out, the stranger he had been speaking with gave him a burger and fries. Slowly, as the night progressed, something incredible happened. The police started to pack up and leave. The bike bloc continued to circle until we were sure our home was safe, and then did a final victory lap, bells ringing, lights flashing, flags waving. The community had survived. The heart of the park beat stronger than ever – and we were all part of it.

Eve Ensler’s first issue of curated stories from Occupy Wall Street was featured in
yesterday’s Huffington Post. Join us next Sunday at 5 pm at Liberty Plaza library
(NE corner of Zuccotti Park) to participate in this ongoing story-sharing experience.