Day One is complete and the team is exhausted.  It feels like we have been here a month.  We thought Afghanistan was complex from the states and we would come here and everything would be clearer....only after  (hopefully) it is even more complex. 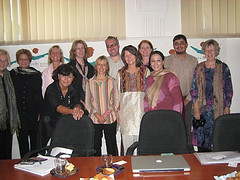 The day began at the offices of Women for Women International (W4WI).  We were skeptical as a man introduced himself as the Deputy Director, but he soon won us over with his deep commitment and understanding of how to make the work really effective and accepted.  They enter each community through the local Imam and convince him that the work of W4WI is the calling of Islam and then the Imam will preach the mission from the pulpit.  Holistic approach.

Sara D. (as there are two Sara’s on the trip) and I traveled with the W4WI staff to one of the teaching locations.  When I opened the car door I could not breath, the thick air was more than I could take in.  We crawled through a narrow doorway with a blanket covering it and entered a dusty courtyard, the air was a bit better, maybe the tree helped.  We climbed narrow steps to a long narrow room with about 30 women on the floor learning about voting.  They were eager and attentive to the teacher. 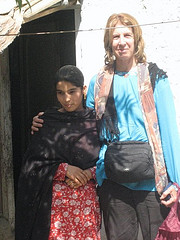 When they paused to let me ask “What do they want from the US?"  The energy and attention shifted and they were talking a mile a minute.  Words were pouring with out hesitation.  On the way to the school, the Program Director told us it was good to have the US soldiers stay to make them safe, but the women in this classroom, emphatically want the soldiers gone.  Reminding us that it is a class distinction. We later learn it is all about Kabul which is the home of about 28% of the Afghan population.  The women in Kabul are better off than with the Taliban, but other women are not.

Part of the group broke off to visit a drug rehab center, learning why there are so many drug addicts in Kabul.  And getting to taste some of the drugs and feel them, the playdough like Opium.  Medea will be posting soon more about this session.  While they were there, we had lunch with Noorrahman Rahmani from the Institute for War and Peace Reporting.  He and his friend, Hafizullah Gardesh, who founded IWPR spent 2 hours telling us the trials of being good journalists in Afghanistan.  They feel that the coalition forces have targeted and killed 3 journalists for telling the truth.  And they wrote a story about a killing by soldiers in Hellman and their entire budget was cancelled by the British Media company. More notes on this meeting to come. 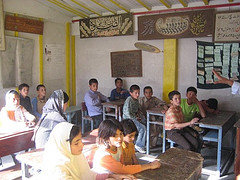 We then went to a school for children who are street workers, meaning they work on the street and support their families.  It was horrifically sad and inspiring.  The harshest part was that the situation is the worst ever and there is no money for the school.  Heartbreaking afternoon, yet beautiful children.

We came back to change into clean clothes for the party Nooria and Asad threw for us.  It was full of fantastic Afghans, each more interesting than the next, Deputy Minister of Finance, the former head of Special Ops for the coalition forces, business women, the niece of the Queen, Karzai’s brother, professors, the economic advisor to Karzai....on and on.  The night started and 6 and we left at about 11, overflowing with new information, new ideas and new friends. And our bellies full of delicious multi course meal that kept coming until we left.  It is very clear that it is all about trust and loyalty here.  Asad is well loved and many of these people had been his friend in high school or college.

There is so much more to share about all the layers of ideas and conundrums and the endless litany of problems the presence of the US has created.  But a constant from everyone is that Holbrooke is a disaster.  We don’t read that in the US media. Here he is called the King of Afghanistan because like Bremer, he rules by edict.