From Beirut to Paris 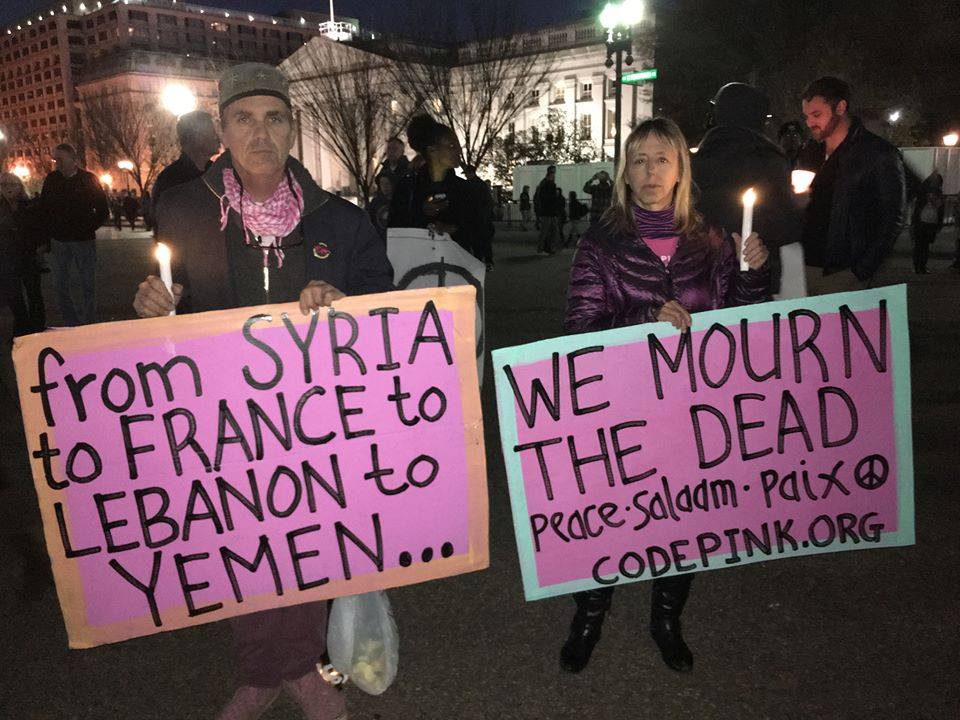 Send your condolence note to the people of France, Lebanon, Iraq, and Syria and we will hand deliver them to their embassies in Washington DC.

At the end of last week, we witnessed horrific attacks that left scores dead and hundreds wounded in Beirut, Baghdad and Paris. These brutal and unconscionable strikes against civilians have been attributed to members of The Islamic State (ISIL), or Daesh (Da’ish). People in Syria are also being slaughtered every day by Daesh and the murderous Assad regime.

Daesh did not arise out of a vacuum. We in the West must look to our own imperial state violence, including the disastrous, immoral, and illegal U.S. invasion of Iraq, as having created the chaos that allowed the spread of these “non-state” actors who now threaten indiscriminate violence from the Middle East to Europe.

When we mourn the terrible loss of life in Baghdad, Beirut and Paris, we must also mourn the deaths of those killed by the U.S. attack on a Doctors Without Borders hospital in Kunduz, Afghanistan, a Saudi-led coalition missile strike on a Yemeni wedding party, drone attacks that incinerate innocent victims as part of “collateral damage,” or a month-long Israeli assault, using U.S. weapons and funded by U.S. tax dollars, on trapped civilians in Gaza. All lives are precious.

Calls for increased US military intervention are misguided. Endless US military involvement in the Middle East has brought only destruction and sectarian division. The solutions will come from the people of the region – not the foreign militaries that created the chaos to begin with.

Let the people of France, Lebanon, Iraq, and Syria know that you are thinking of them.

And please commit to working with us to stop US-funded wars, and to promote diplomacy and negotiation.

As Massa Mufti, our Syrian friend living in Beirut, wrote to us, "The world, in its fury, believes that it can eradicate ISIS by retaliating? Seriously? Can't the world think of eradicating the source of it? The injustice, despair, radicalism that led to its nurturing and spreading? More than ever, we need people like you—people who fight using peace and human rights as their weapons."