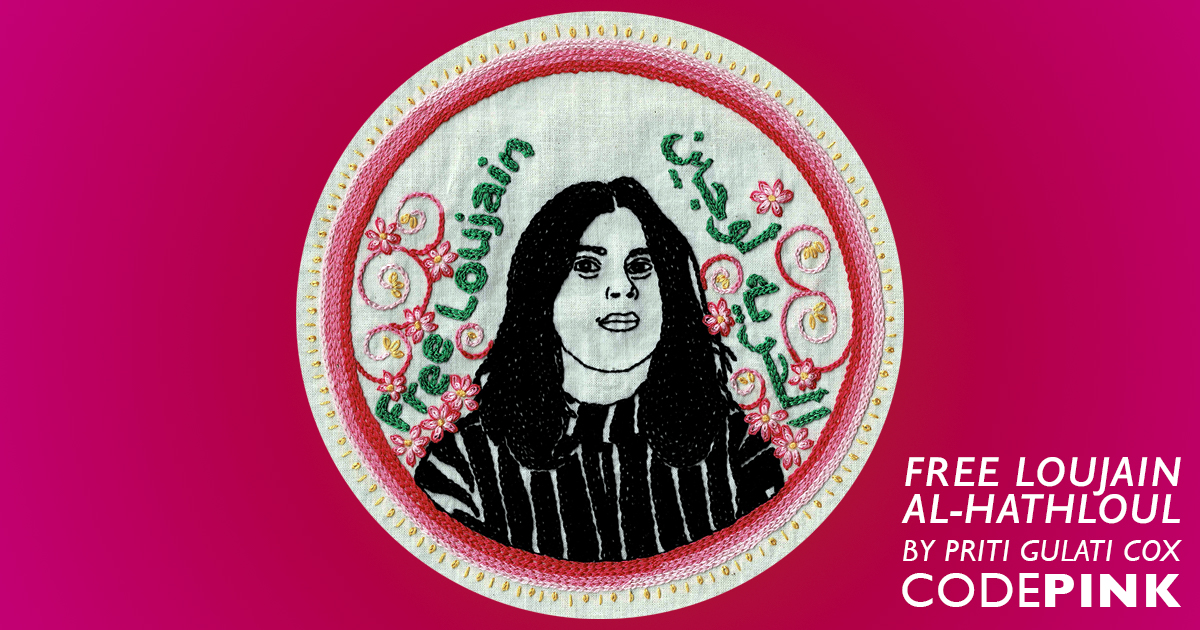 We make equipment, we give it to our so-called allies[in the Middle East], who we don’t even know who the hell they are… 2,300 Humvees sent over. A couple of shots are fired and these guys run like a bunch of thieves, which they are. Our allies. Our allies. And ISIS picks up the weapons, the Humvees, the this. It’s just incredible.” — Donald Trump, Des Moines Register, November 13, 2015.

Around the time when then-Republican candidate Donald Trump was talking about Humvees and thieving allies, women in Saudi Arabia were doing two things for the first time: voting and standing in elections. Loujain al-Hathloul was one of them. But her name was never added to the historic ballot. Fate had something else in store for this 31-year-old Saudi Arabian human-rights activist.

Loujain realized that she was imprisoned with women who were sent to this ‘care home’ for simply ‘disobeying’ their male guardians. The Saudi government sees these women as delinquents. Our sister realized that freedom for these women wouldn’t come from just being able to drive, but to be free from male guardianship. — Lina and Alia al-Hathloul, sisters of Loujain al-Hathloul, Marie Claire, January 11.

Loujain first attempted to drive a car in Saudi Arabia in November 2014 when she drove from the United Arab Emirates into Saudi Arabia in defiance of the ban on women driving. She was arrested on December 1 by Saudi authorities and incarcerated for 73 days at the Dar al Reaya (care home). A time when, as her sisters Lina and Aliarecall, Loujain “increased her activism.” Then in 2016, she, along with other activists organized a campaign calling for an end to the kingdom’s male guardianship system.

Loujain was arrested on May 15, 2018 for her women’s rights advocacy, including Saudi women’s right to drive. According to Middle East Eye, she was rounded up along with “at least a dozen other women activists, just weeks before the decades-long ban on female drivers was lifted.” They were charged with allegations of communicating “with people and entities hostile to the king,” cooperating with “journalists and media institutions hostile to the king,” providing “financial support to foreign adversaries” and recruiting “persons for information detrimental to the security of the kingdom.” In other words, Loujain and her activist friends were charged with threatening the freedom of the kingdom. Freedom to suffocate their women subjects. Their rights. Their dignity.

According to Lina and Alia, during the first 50 days of her pre-trial detention, Loujain was tortured. Besides keeping her in solitary confinement for a major part of that time, the Saudi authorities threatened, in their words ‘to rape our sister, to chop her body into pieces, and to throw her in the sewage system. They flogged her, waterboarded her, electrocuted her, and sexually assaulted her.”

Loujain’s father Hathloul al-Hathloul tweeted about the torture and sexual harassment, after which his account was suspended by Twitter. This is a video of Loujain driving in October 2103, filmed by her father.

It is utterly grotesque that at the same time Saudi authorities will host a motorsport event - including women drivers - while the heroes that won their right to drive languish in jail.  — Loujain’s supporters calling for the boycott of the Dakar Rally, The Guardian, January 5.

An annual motorsport event called the Dakar Rally dates back to 1979. The Paris-Dakar Rally moved to South America in 2008 due to terror threats in Mauritania, where it was supposed to be held. According to The Guardian article,  Saudi Arabia became the host in 2020 “as part of the kingdom’s multi-pronged strategy to open up to the world and wean off dependence on oil revenues by 2030.” The off-road race was flagged off on January 3.

Our cars here in the U.S. are playing an important part in getting us through this pandemic. If it wasn’t for them, those of us who take social distancing seriously wouldn’t be able to drive up to our grocery store pickup lanes, for instance. Or sit in them and honk away every time we agreed with something Joe Biden and Kamala Harris had to say in their outdoor pre-victory speeches.

But is that really freedom? Nothing exemplifies the emptiness of American freedom more than those empty cars that we see parked outside convenience stores with the engines running, the driver taking his/her time shopping inside.

On December 28, 2020, when reports were coming out in the U.S. about the month being the deadliest in the COVID-19 pandemic with more than 65,000 confirmed deaths, Loujain was sentenced to five years and eight months by the kingdom’s Specialised Criminal Court (terrorism court). However, two years and ten months of the sentence was suspended, and she would be credited with the 32 months that she had already spent in pre-trial detention. Loujain would now only have two months of her sentence left to serve. According to The Guardian January 11 article, this move was made by the Saudis to hopefully “diffuse a potentially damaging early confrontation with the Biden administration.”

In May 2017, a year before Loujain’s arrest, Trump set his term in motion by making Riyadh his first foreign visit and signing the biggest arms deal with the kingdom in US history. That was then. According to a recent BBC article, “concerns over Saudi Arabia’s human rights policy, including the detention of dissidents,” is one of the things the Biden administration’s new Congress wants to have a say in. This is now. Will Biden and Harris spend their energy and rhetoric uniting with progressives in their party or with the Republicans? Like they’ve done in the past? We’ll see.

No-one should be fooled by the Saudi regime’s attempts to sportswashing… Racers might not know it, but their participation there is to hide and whitewash the host’s crimes. — Lina al-Hathloul, The Guardian, January 5.

It doesn’t matter that Loujain might just have two months of her sentence left to serve. Her supporters and those of us who don’t take our freedom to drive for granted see her sentencing as an unconscionable act. And we see the Land of the Free’s pride in its freedom as a whitewash hiding imperial crimes that it has carried out in the Middle East. Like a sport. With their Humvees and $110 billion arms deals. Shameful. Let’s just call American foreign policy for what it is: Freedomwashing.

The Biden administration needs to be as vigilant in holding the kingdom’s atrocities accountable as it is about Trump and his assault on American democracy. Why wait, Biden? Unite with your own party. Now! Why wait for another two months? Free Loujain al-Hathloul Now!