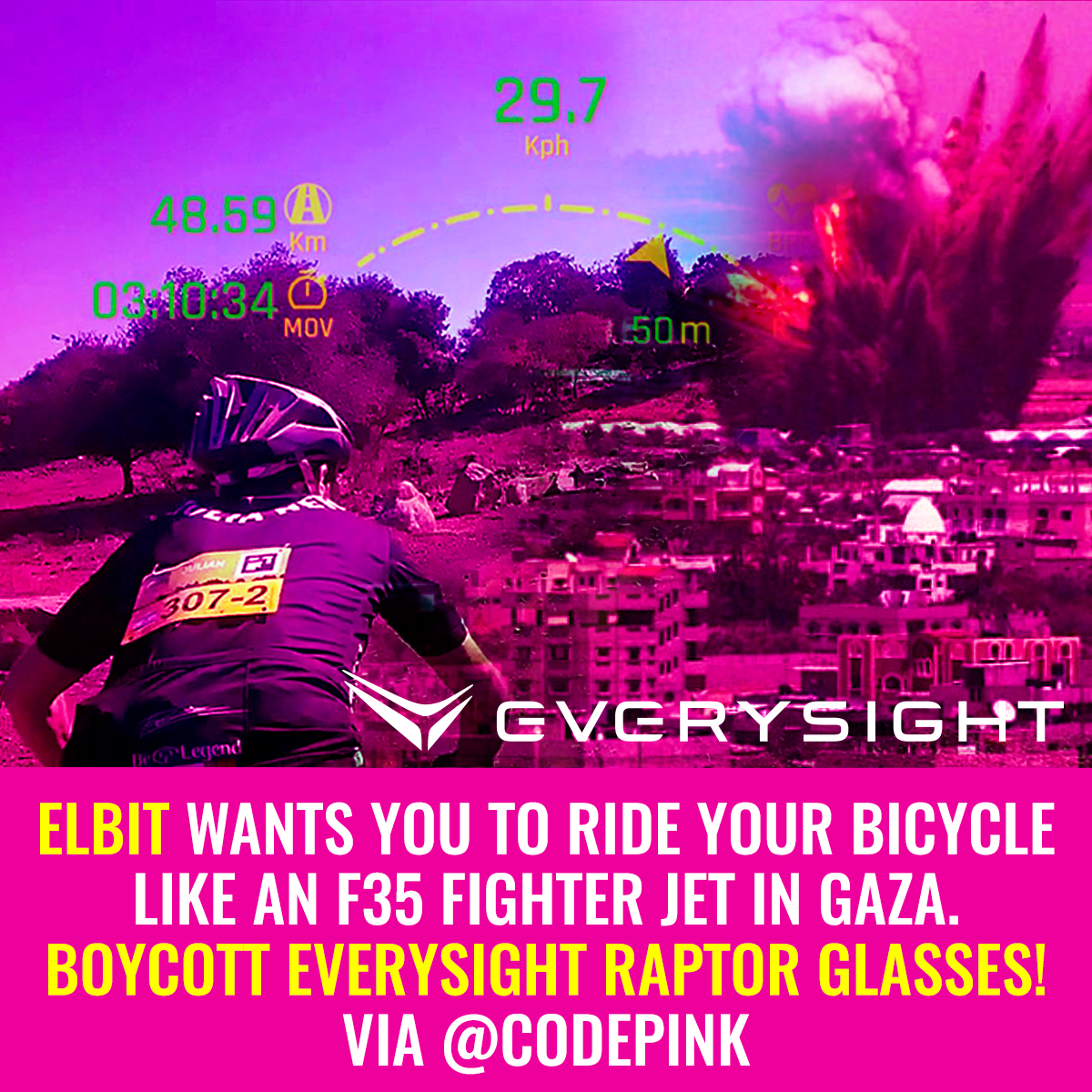 Israel’s largest weapons manufacturer, Elbit Systems, is bringing taking its death and destruction to the general public by selling augmented reality glasses to cyclists so they can ride their bike like a fighter jet pilot with the Everysight Raptor:

Palestinians in Gaza are facing a humanitarian crisis caused by the 12 year illegal Israeli blockade. Since March 30, 2018, the Israeli military has killed over 250 Palestinians protesting for their rights as refugees to return to their homes and to live free of military occupation. Everysight is owned by Elbit Systems which is instrumental in Israel's ability to commit war crimes against the Palestinian people by serving as the Israeli military's main supplier of drones, weapons and surveillance technology.

From Palestine to the U.S.-Mexico border, Elbit is a leader in providing the technology of repression that maintains colonial borders and walls. For the U.S. Department of Homeland Security, Elbit supplies the surveillance towers, radars, and drones used to militarize the border and make the desert more dangerous for migrant workers and indigenous people.

We are calling on stores, cyclists, and cycling events to boycott Everysight and Elbit Systems. Send a message to the world's largest cycling festival the Sea Otter Classic and their founder Frank Yohannan to take a stand for justice and human rights by canceling Everysight’s upcoming presence at their upcoming event.

Everysight, the maker of Raptor Glasses, is owned by Israeli weapons manufacturer Elbit Systems. Elbit technology and weapons are used kill and repress Palestinians in Gaza and the occupied West Bank. Elbit surveillance technology is used to militarize the U.S.-Mexico border and repress migrants and asylum seekers.

Everysight Raptor glasses are built on and celebrate Elbit F-16 fighter pilot technology, enabling the killing of countless numbers of civilians in Gaza.

Please boycott Everysight’s Raptor glasses. Do not allow the Everysight Raptor to be demonstrated at the Sea Otter Classic.