Emergency Protest at the Bahrain Embassy in D.C.

On February 17th the King of Bahrain unleashed his police forces upon sleeping protesters, including women and children sleeping in their tents in Pearl Square in the middle of the capital. The King had not long ago apologized for his government’s recent murder of two peaceful protesters.

Under fire from rubber-coated bullets, concussion grenades and birdshot, protesters and their children fled down streets, ruthlessly pursued. The next day the King asserted that the armed forces had not attacked anyone. But he made no denial concerning his police. The police claimed that they had warned protesters to leave Pearl Square but reporters present dispute the word of the police; no warning whatsoever had been given before the firing of ammunition. The local hospital was filled with the injured and the dead. Scores of protesters are still unaccounted for. About 400 protesters who had gathered around the hospital, many directly concerned about loved ones, found themselves again surrounded by police.

In this island kingdom that still discriminates against its Shiite majority, the US has stationed its large naval headquarters and parleys favor with this shameless despot. The kingdom takes in much wealth from the American presence.

We who believe in democracy and honest government without hypocrisy must take a stand. That is why at noon on February 18th CODEPINK and friends gathered in front of the Bahrain embassy in Washington D.C. to call upon the Arab Kingdom of Bahrain to stop the brutal repression of peaceful protesters. There was an exceptionally large media turnout to cover the event, and they seemed impressed by our enthusiasm despite our small numbers. We decried the government of Bahrain for its murderous response to the protests, as well as its unabashed suppression of the basic rights of its citizens, such as the right to life, freedom of speech, and the freedom to assemble. We also criticized the lack of a strong condemnation from the Obama administration and the continuous presence of the U.S. Navy base in Bahrain. 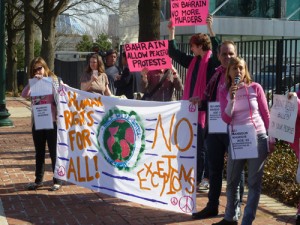 Even though we received permission earlier in the day to deliver a letter to the Bahrain ambassador to the United States, no one from inside the embassy was willing to come outside and accept our letter. Although security said they would take it inside, we were determined to give it to someone who is actually from Bahrain, but after waiting for quite a while we ended up with no choice but to give it to one of the security people. It is unfortunate and bizarre that no one from the embassy was “authorized” to come out and speak with a small group of peaceful protesters for just a few minutes. Nevertheless, we got our message across with our large and colorful signs and banners. We held pink signs that said “SHAME SHAME ON BAHRAIN: NO MORE MURDERS” and “A MURDERER IS THE KING OF BAHRAIN”; we chanted rhymes such as “The people are rising, DICTATORS BEWARE! From Tahrir to Pearl Square, DICTATORS BEWARE!”

It is our hope that the U.S. government will stop supporting oppressive regimes, and instead take sides with the protesters in Bahrain and across the Middle East who are putting their lives on the line and bravely demanding the same rights that we hold so dear in our own Constitution.