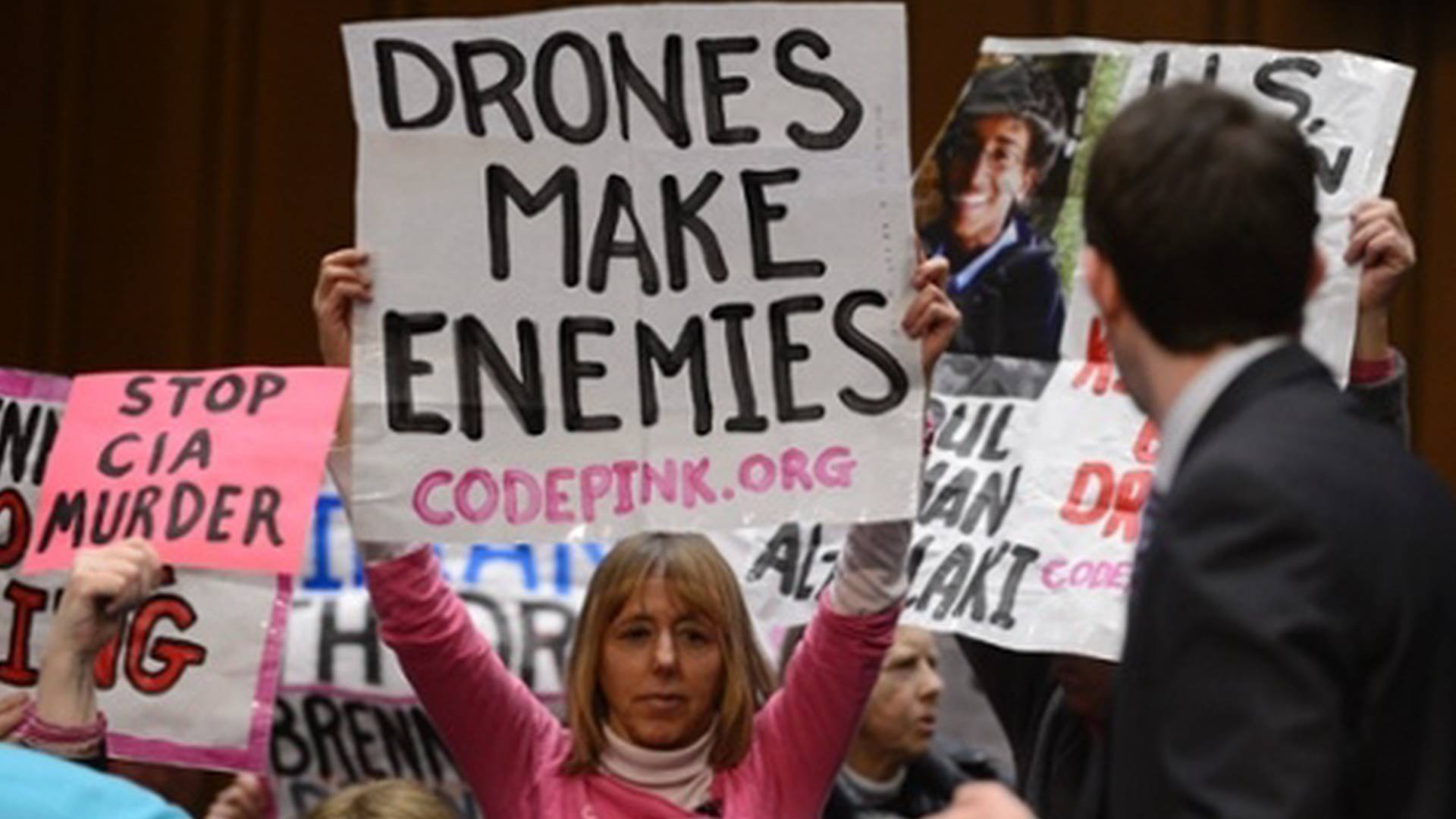 What is a drone?

A drone, or “unmanned aerial vehicle” (UAV), is an unmanned aircraft that can be piloted remotely. Drones vary in size and weight and can be used for surveillance and attacks.

Where is the U.S. sending drones?

The U.S. uses drones primarily in Pakistan, Yemen, and Somalia, but has also used drones in military campaigns in Afghanistan, Iraq, and Libya.

What damage can a drone do? Signature strikes & double taps

Depending on the model of the drone, a drone such as a Reaper can carry thousands of pounds of payloads which result in high collateral damage. Predator drones have a less of a collateral impact, but the Hellfire missiles are lethal for the target.

Signature strikes occur when targets are killed based on suspicion. If someone appears to be engaging in “suspicious behavior,” such as associating with a “suspected militant,” carrying a weapon. Any behavior the U.S. deems “suspicious” can justify a signature strike.

A “double tap” occurs when a second drone strike follows the initial strike which results in the murder of those who may have rushed to the scene to understand what has happened, search for survivors, or assist the injured.

Who is the U.S. targeting?

The U.S. targets militants and suspected militants, especially al-Qaeda and its affiliates. However, the U.S.’ targets reflect a major problem of racial profiling, resulting in the murder of many innocent or low-level affiliates who are primarily young Muslim men.

President Obama must approve every drone target, but it has been shown that he did not approve every strike. Find out more in the Intercept's report here.

How accurate are drone strikes?

The accuracy rate for hitting the intended target is approximately 1.5-2%. The Bureau of Investigative Journalism has estimated that 98% of victims of drone strikes are “collateral damage,” or in more human terms, civilians, children, or suspected militants who are either minor, low-level affiliates or whose involvement with militants has never been proven.

How many casualties have there been?

The Bureau of Investigative Journalism estimates that nearly 4,000 total casualties have resulted from U.S. drone strikes in Pakistan, Yemen, and Somalia. As many as 954 have been civilians, and as many as 225 have been children. The high number of casualties includes anyone who the U.S. deems suspicious, which could mean they were driving suspected militants, attending a funeral of a suspected militant, or carrying a weapon.

Have there been American citizens killed by drone strikes?

Five American citizens have been killed by drone strikes. Anwar al-Awlaki, who was affiliated with al-Qaeda, and Samir Khan, were killed by a strike in 2011. A second strike killed al-Awlaki’s innocent 17-year-old son. In 2002, Ahmed Hijazi was killed. All of these victims were American citizens living in Yemen. In 2015, hostage Warren Weinstein was also killed.

17-yr-old Awlaki was allegedly the only U.S. citizen actually targeted by American drones. The others were believed to have been killed "inadvertently" by being "in the wrong place at the wrong time."

Are drone strikes a violation of international law?

The United Nations has stated that the U.S. use of drone strikes in Pakistan violates international law and is a threat to human rights not only because of the mass casualties drones strikes cause but also because the Pakistani government does not consent with the drone strikes. The UN Special Rapporteur on Counter-Terrorism and Human Rights, Ben Emmerson, released a statement expressing that the Government of Pakistan “considers US drone strikes to be counter-productive, contrary to international law, and a violation of Pakistan’s sovereignty and territorial integrity.”

Authorization for the Use of Military Force, passed by U.S. Congress in 2001 after the 9/11 attacks, legally empowers the president to “use all necessary and appropriate force” to pursue those responsible for acts of terrorism.

Preemptive self-defense violates international law, which states that nations may defend themselves against an immediate attack, but signature strikes and double taps do not attack those who pose an immediate threat. Rather, signature strikes target individuals who fit a profile, and double taps eliminate rescuers and other innocent people who rush to the scene of the first attack.

International human rights law does not allow the use of Hellfire missiles because their heavy fire power exceeds the limits of fire power allowed for law enforcement purposes, according to the American Society of International Law.

Do drones make us safer?

The justification for drone strikes is that they target “terrorists” and protect Americans and the citizens on the ground, when in reality these attacks result in high casualties, tarnish the United States’ reputation, and fuel retaliation. Drone strikes violate national sovereignty, and Pakistani Prime Minister Nawaz Sharif has repeatedly condemned the use of drone strikes in Pakistan. In general drones foster anti-American sentiment abroad and threaten our national security as well as the safety of those living in Yemen, Pakistan, and Somalia.

Who are the Unmanned Systems Caucus?

The Unmanned Systems Caucus supports the rapid development, acquisition, and use of drones. The representatives that comprise the caucus are listed below:

Does the U.S. use drones domestically?

Domestic drone use is currently limited to surveillance along the nation’s borders and within a few states, such as Texas and Florida. In February of 2013, the U.S. sent surveillance drones into Mexico to gather information about drug trafficking. The restrictions currently in place are due to concerns about air safety and infringement of  privacy. The push for drone use within the United States is strong, and drones manufacturers are considering the option of drones that would fire rubber bullets and spray tear gas to assist law enforcement.

How does drone surveillance violate the Fourth Amendment?

Because surveillance drones have thermal and x ray imaging capabilities, they are extremely pervasive. The Fourth Amendment protects citizens against unreasonable searches and seizures, and surveillance drone technology violates those rights.

Is there a pro-drone lobby?

The Association for Unmanned Vehicle Systems International (AUVSI) is the largest pro-drone lobby. Their membership exceeds 7,500, and their vision, as listed on their website, reads, “To improve humanity by enabling the global use of robotic technology in everyday lives.” They function to organize conventions, fund student competitions that encourage an interest in robotics and technology, and release publications that concern drone technology. Their work emphasizes the technological significance of drones but fails to mention the near 4,000 civilian casualties of drone wars.

Who are the top drones manufacturers?

According to The San Diego Union-Tribune article “Prowling for Profit,”the Predator and Reaper generally cost $4 million to $12 million each. The U.S. Defense Appropriations FY2010 key investments included $489 million for 24 new Reaper drones.The upcoming U.S. Defense Appropriations FY2011 includes: $2.2 billion for procurement of Predator-class aircraft to increase the Combat Air Patrols (CAPs) available to deployed forces from 37 to 65 by 2013; and doubling procurement of the MQ-9 Reaper over the next few years.

What Senate Committees deal with the drones issue?

What is President Obama’s stance on drone strikes?

President Obama has defended the controversial use of drone strikes. He stated in his address on May 23, 2013, on U.S. drone and counterterror policy that drones are an essential component of national security. However, his administration continually stresses the effectiveness of the program, when, in reality, drones have an accuracy rate of 1.5-2%, have resulted in a few thousand civilian casualties, and serve to radicalize drone strike survivors against the United States.

As far back as 1982 Israel used drones against Syria. In the early nineties Israelis drones were used in the Kosovo campaign. The Israeli Air Force invades the skies over Lebanon and patrols occupied West Bank and besieged Gaza with drones. Twenty-nine civilians, including eight children were killed in what appeared to be six missiles by drones in Gaza. In Beirut, Lebanon and Israeli drone fired and killed at least 6 civilians and wounded 16. Israel refuses to confirm whether it is using armed drones over Gaza.

Israel ranks second after the United States in the development and possession of drones, according to those in the industry. As the drones get bigger and more advanced, they become more expensive. Small drones cost tens of thousands of dollars. Big drones are hugely expensive. Some costs as much as $60 million. Elbit Systems Ltd and Israel Aerospace Industries Ltd are the two manufacturers making the deadly drones — Heron TP/Eitan and Hermes 450. Between 2009-2018 the U.S. is scheduled to give Israel 30 billion dollars in military aid. The Israeli Air Force since at least 2005 has been training many operators and maintainers.