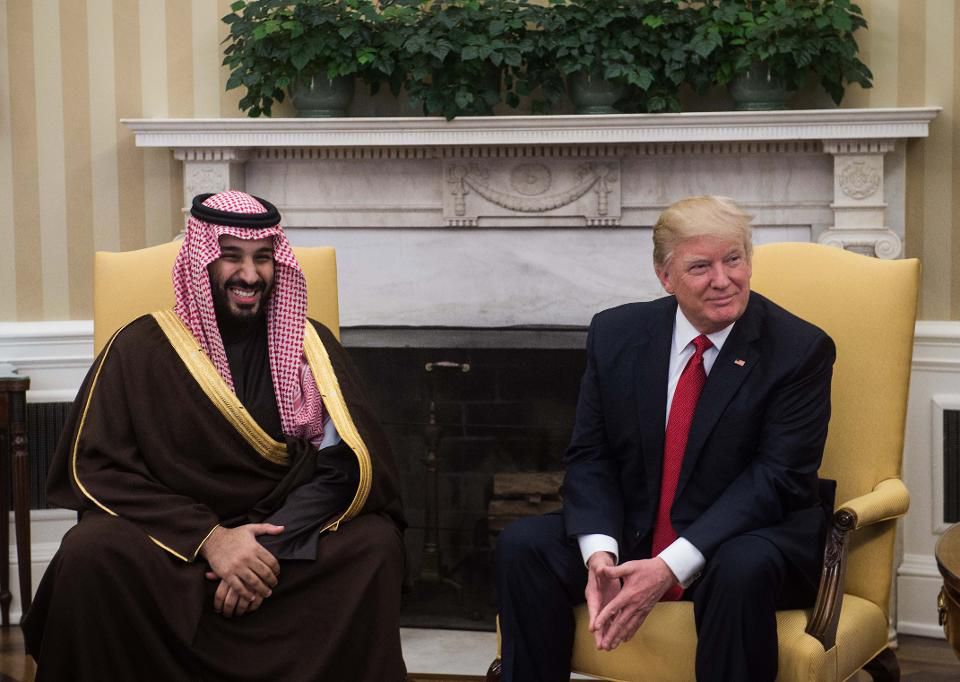 Saudi Arabia’s 32-year-old Crown Prince Mohammad bin Salman, heir to the Saudi throne after eliminating his rivals, is on a two-week whirlwind visit to the United States starting March 19. He plans to cement his ties to the Trump administration, shore up support for his war in Yemen while whipping up more opposition to Iran, and make lucrative business deals. From political meetings with Donald Trump and Congress to cultural events at DC’s Kennedy Center, a talk at MIT, gatherings with tech leaders in Silicon Valley and oil executives in Houston, the prince will be selling dolled-up versions of both his repressive kingdom and his favorite product from the House of Saud: himself. But don’t get sucked into the media hype, seeded by well-paid PR firms, that the prince is a reformer who is bringing substantive change to the kingdom.

MbS, as he is known from his initials, is really a brutal bully responsible for bombing and starving Yemenis. He’s also gunning for a war with Iran, blaming Iran for the Middle East turmoil. Meanwhile, he recklessly imposed a blockade of Qatar that has divided the Gulf States and tried to force a bizarre showdown with Hezbollah in Lebanon by holding Prime Minister Hariri hostage. Recent reports reveal that he has even been holding his own mother under house arrest, hidden from her husband King Salman, for fear she would stand in the way of her son’s ruthless power grab.

Yes, it is true that MbS is making some positive reforms. Women will soon be able to drive and the morality police are not as repressive. Movie theatres are opening, and more cultural events are allowed (although they must all pass government muster and most are gender-segregated). But these reforms are minor in the larger picture of a kingdom that brooks no dissent internally and is committing war crimes abroad. According to Human Rights Watch, “Mohammed bin Salman’s well-funded image as a reformist falls flat in the face of Yemen’s humanitarian catastrophe and scores of activists and political dissidents languishing in Saudi prisons on spurious charges. Baby steps on women’s rights reforms don’t paper over Saudi Arabia’s systemic abuses.”

The prince’s most destructive policy is his war on Yemen (bin Salman is head of both the military and the economy). Started in March 2015 in what the prince thought would be a quick and dirty campaign to defeat the Houthi rebels, the relentless Saudi bombing campaign and restrictions on humanitarian aid have turned Yemen into the world’s greatest humanitarian disaster. The US participation in this Yemen war includes selling the Saudis billions of dollars in weapons (Saudi Arabia is the number one purchaser of US weapons) and providing in-air refueling of their bomber planes. Bin Salman’s visit is coming at precisely the time when the Senate is embroiled in a debate over Resolution 54, a bipartisan resolution that would end the unauthorized US military participation in the Yemen conflict. The prince will certainly use his visit to shore up support for the war, painting it as a fight against the Iran-backed Houthis rather than Saudi interference in Yemen’s internal affairs.

To consolidate his power at home before the death of his father, King Salman, MbS has just pulled off a heist that would make bank robber Butch Cassidy green with envy. He rounded up hundreds of his rival elites and held them hostage in the gilded Ritz-Carlton Hotel until they turned over billions of dollars, real estate and shares of their companies to his control. According to a New York Times exposé, some detainees were subjected to such physical abuse that 17 were hospitalized and one died in custody, with a neck that appeared twisted, a badly swollen body and other signs of abuse.

The whole affair was framed as a fight against corruption, but all transactions were conducted in secret and outside the law. Those who have been released are banned from travel and are afraid to denounce bin Salman for fear of further reprisals. Meanwhile, the prince who is portrayed as a Saudi Robin Hood taking from the elite to spread to the poor bought a $500 million yacht from a Russian vodka financier, a $300 million French chateau described as “the world’s most expensive home,” and a $450 million Leonardo da Vinci painting purchased at a Christie’s auction--the most expensive painting ever sold.

So don’t be fooled. Beneath the veneer of reform is a young man who believes that his bloodline gives him the right to become the next absolute monarch in a family that has ruled the nation with an iron fist since its founding in 1932. The Saudi kingdom is still governed by an intolerant version of Islam, Wahhabism, and spreads that ideology around the world. The government still represses the Shia minority and non-Muslims, and remains a country where atheism is a capital offense and all churches are banned. Free speech and free association are forbidden. There are no national elections and political parties are banned, as are unions and most civic organizations. Criticizing the Saudi regime can lead to flogging, harsh jail sentences or beheading.

While Saudi Arabia will soon lose the distinction of being the only country in the world where women can’t drive, the regime continues to be the world’s most misogynist, gender-segregated country. The guardianship system gives men authority over the most important decisions in women’s lives, and women are forced to be covered in black from head to toe when they are out in public.

A repressive kingdom ruled, de facto, by a cunning, 32-year-old strongman who has made hundreds of internal enemies among the elite and conducts foreign policy in a more impetuous manner than Donald Trump is a recipe for disaster. The United States should not be arming and abetting this regime and investors dazzled by the prince’s charm offensive and gobs of money should take a second look. If Saudi Arabia is indeed to move into the 21st century, it must stop being governed by royalty.

Medea Benjamin is cofounder of the peace group CODEPINK and author of Kingdom of the Unjust: Behind the US-Saudi Connection.