Divest from War, Invest in People 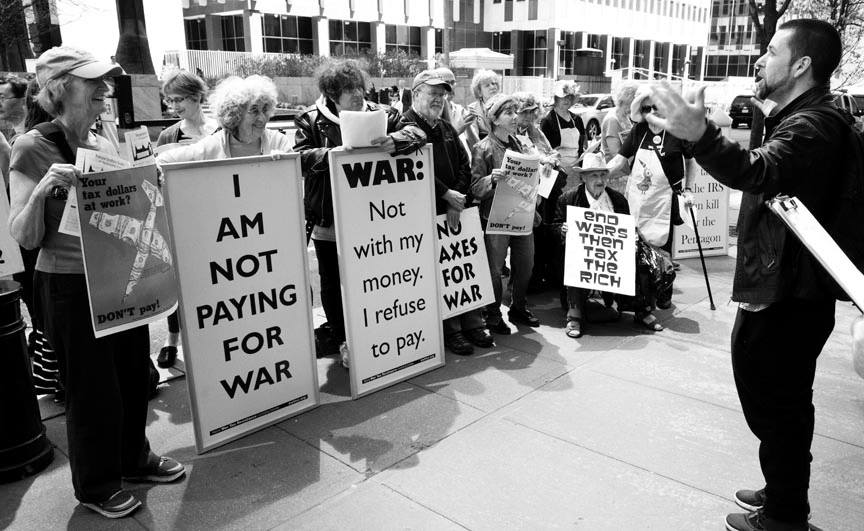 In his inaugural speech, Trump proclaimed "America First". The U.S. does rank first in weapon sales, in mass incarceration and in producing waste material. Pope Francis urged President Trump to be first in protecting the poorest in society. But instead, President Trump has surrounded himself with generals and billionaires in cabinet level positions.

It's true; some of President Trump's policies actually extend wrongs enacted by previous administrations. Other presidents and their spokespersons have championed an escalating war on the global poor under the pretenses of humanitarianism and democracy. They wore “masks” that were easier for many in the U.S. to look at and accept, and yet their policies caused terrible bloodshed, starvation and death.   A widespread drone war, annihilating civilians from the air, is an example of a brutal rightward turn which some liberals accepted.  Was drone proliferation seen as an improvement on previous means of warfare because it was presented in an articulate, professorial tone? During a previous Democrat administration I recall protesting brutal economic sanctions which, halfway through their eleven-year reign, had contributed directly to the deaths of hundreds of thousands of Iraqi children aged four years or younger. The antiwar movement tends to demobilize when a well-spoken Democrat is in office.

Trump’s victory hinged on the Democrats’ refusal to offer more than token resistance to militarism and rising inequality. To successfully organize against Trumpism, we must move toward making actual changes in the lives of those who are most vulnerable and unprotected, especially among the poorest people in our societies.

Dr. Martin Luther King discussed the “giant evil triplets” of racism, militarism and income inequality. He assured us none of these can possibly be conquered alone. As protests erupt against the policies of Donald Trump it is valid to question what is “style” and what is “substance”. How can the energy generated by these actions be channeled into functioning and effective resistance?

Trump’s executive orders have already escalated our government’s commitment to inequality well beyond what Hillary Clinton would ever have likely attempted. His cabinet appointments suggest he will rival or exceed her in militarism.

We must cut through the fog and recognize our collective responsibilities. There are numerous ways to turn the energy of protests into daily action, but they all involve organizing, not against a hated political figure, but against policies which must be successfully reversed. One example is war tax refusal. My own decision, made and held since 1980, is never to pay federal income tax to the U.S. government. Our leaders depend on taxes to continue their destructive campaigns. Monies not forwarded to the government can be redirected to causes in support of peace, victimized communities and the poor.

The National War Tax Resistance Coordinating Committee (NWTRCC) is an organization that encourages interested parties to nonviolently oppose taxation for war. This group links to grassroots communities and may provide the basis for additional refusals of cooperation. Anticipating resurgent interest in refusal to pay for abhorrent, discriminatory policies, a group of war tax refusers approached NWTRCC with the idea of encouraging people to consider war tax resistance by contacting the network. Their “call,” posted on the NWTRCC website, is signed by a growing list now numbering over 120 people.

Essentially, we can't afford Trumpism and we can’t afford alternatives to Trumpism that were rejected in the last election. We need to reject Trump’s executive orders in substance as well as style, living more simply so that others may simply live. War tax refusal is a small gesture in that direction, quieter than a march but potentially meaningful. It gives us a chance to align our lives with our deepest values and welcome kindred spirits to join us.

Photo credit:  Photo appears in the February/March edition of "The Catholic Radical"

Kathy Kelly ([email protected]) co-coordinates Voices for Creative Nonviolence (www.vcnv.org) and has relied on NWTRCC (nwtrcc.org) since 1980 when she first began refusing to pay all forms of federal income tax.

“We refuse to pay for war! Nearly half of the federal income tax is funding endless war and war preparations. In good conscience, we will not pay this war tax. Some of us live below a taxable income. Many of us who are taxable have chosen to re-direct our refused taxes to organizations that provide for basic human needs. To explore this form of conscientious objection, please contact the National War Tax Resistance Coordinating Committee at www.nwtrcc.org or (800) 269-7464 – for information, literature, counseling and guidance.”

As a war tax refuser, will you join us? We can add your name to the statement. At some point in the near future, the statement and names will be printed in as many peace and justice publications and media sources as possible. To include your own name only, please send an email to: [email protected]. Thank you.