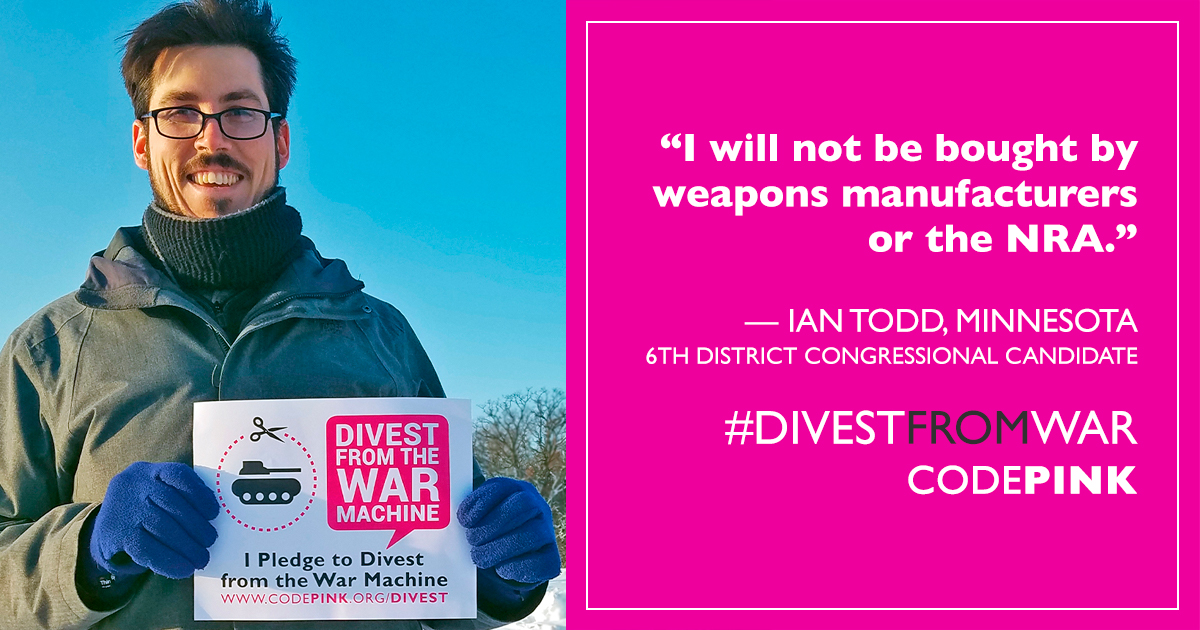 A new wave of progressive congressional challengers are taking on this important issue in their districts around the country, including Veteran and Congressional candidate Ian Todd who sat down with CODEPINK to talk more about why veterans must oppose the military industrial complex. Are you interested in asking your elected representative to take the pledge and divest from the war machine? Contact [email protected] for important resources, information, and support!

Some folks might be confused how someone who served in the military is anti-war. What does it mean to you to be anti-war and a veteran?

I have experienced much of what it means to fight a war. Some things like the comradery and knowing you’ve saved people’s lives is great, but I’ve experienced the darker points, too. I’ve seen the toll it takes on the ground, against the people we are fighting against, and the toll it takes on us. My old career field has one of the worst suicide rates out of any job in the country.  It’s difficult to reconcile because I am proud of my service, but I am not proud of the vast majority of things our country has done in the name of national defense. Being a veteran doesn’t mean I support war, it just means I speak from experience when I condemn it.

Why did you initially decide to take our pledge to stop taking campaign contributions from  weapons manufacturers?

One of the biggest reasons I took the CODEPINK pledge is because I think the military industrial complex is the among the most detrimental aspects of our government. We have extremely wasteful defense spending, especially when it comes to defense contractors. Government money going to contractors gets fed back into their lobbying efforts which work to procure larger handouts from the government. This is an endless cycle of waste that needs to be stopped. The second part of the pledge refers to divesting from the NRA, and I do not accept money from the NRA because they stand against the common sense proposals to address gun violence in our country. There are many different avenues for gun reform but no action has been taken. The NRA is at least partially responsible for the log jam. The strategies of the NRA’s lobbying are not about second amendment rights, they’re about firearm sales.

We spend over 64% of our discretionary budget on war. In addition to pledging to stop taking campaign contributions from weapons manufacturers, how else might you address the military industrial complex?

I think the best thing we can do to address our country’s military industrial complex is not necessarily to focus on decreasing the defense budget due to what an uphill battle it is. Instead, we need to look at all of our contracts and see what’s worthwhile and which ones provide what’s promised. I think we would find a lot of contractors that are not giving us what we need, for example the disastrously wasteful contracts for F-35 fighter jets. It’s time to free up that money and use it to actually help the threats facing the world. The single greatest threat to national security is climate change, and senior Pentagon officials have acknowledged this fact. It’s time to use military money to fight climate change. After all, that is exactly what generals with decades of experience are telling us to do. All the money we could possibly need is right there in that budget if we could just stop wasting it.

In addition to the role of lawmakers in ending militarism and working for peace, what do you see is the role of peoples’ movements and grassroots organizations outside of the government in fighting the military industrial complex?

We as the people have to be organized in sending a message. Our politicians must be afraid that there are consequences to their actions. Right now, most Congressional members do not talk about decreasing the military budget, only increasing, even Democrats. We need organizations on the ground that draw a line in the sand and say that we will not vote for those that increase the budget, and we will organize against those that will increase it. Along with this, we really need to start educating the people, as there is so much misinformation. Too many folks are just told that that this incredible amount of money is needed for national security and take it at face value. It also concerns me that reported casualties from our military are so often much lower than independent sources. People need to learn that more people are dying and less is getting done than they’ve been led to believe. These movements have to teach the rest of us how ugly and useless war is and why we need to stop them.

How, in your opinion, can resistance to militarism be made into a mainstream issue that people from all walks of life see a reason to get involved in?

I think this again lies in defense spending and spreading awareness about how wasteful it is. We have so many people concerned about our national budget and the ballooning deficit. We can talk about how to save money by pulling funding, but in having that conversation we need to talk about what defense spending means and where all that money is going. A lot of military spending is put into “Use it or lose it budgets”, where if it is not fully used for its allocated purpose that money just goes away; it doesn’t get rolled over or reallocated and next year’s budget will decrease because it’s assumed the organization can make due with less, and no commander wants their legacy to be a decreased budget. People are often furious when they hear that this is going on in other parts of our government, and they should be just as furious that it happens in the military.

When I talk to people, it’s clear they don’t want government waste, but they don’t always connect government waste to military spending. People are more willing to listen to a veteran like me, as well as my fellow veterans who have the same complaints, because we’ve seen the waste first hand, which is why I continue to speak out on the issue.