DENVER - YOUR PROTESTORS SHOULD BE GREETED WITH FLOWERS!!

Special report by Linda Milazzo--At the very core of patriotism is the desire to preserve and enhance democracy. For true patriots -- those who take their love of nation beyond the confines of their cushy sofas and wide screen TVs -- there are no limits to their efforts to hold leaders accountable to uphold the Constitution and safeguard its inherent freedoms. Thus, for the past three days that I've been in Denver -- in the hotbed of this mecca of "this is what democracy looks like," I've witnessed the GOOD and the NOT so good.

The GOOD are the thousands of Americans who have traveled from every part of this country to engage in actions to spread their personal messages of democracy: peace above conflict, government's responsibility to provide for its citizens, and an immediate stop to the constant rape of our resources and once fine name by those who base success on the wealth of their fortunes rather than the wealth of their humanity.

This week, in addition to the official Democratic delegates attending the Convention INSIDE the Pepsi Center, where thankfully many progressive delegates - most members of Progressive Democrats of America - are pushing social values to end the corporatism that has left millions unemployed and homeless, and millions more verging on joining them - there are thousands of activists of ALL AGES and all socio-economic backgrounds who have joined the fray. These activist patriots are working OUTSIDE the Pepsi Center to push socio-political agendas more in line with what MOST Americans want and NEED today - universal single-payer healthcare, high standard public education, affordable housing, food safety, safeguarding the environmental, ending the military and prison industrial complexes, AND MORE!

The American citizenry, most of whom have sat idly by for the past eight years while their nation was besieged by a criminal administration, owes a huge debt of gratitude to these troubadours of peace who have taken Denver by storm at this Democratic National Convention - not to mention the debt to them for their countless prior acts of personal courage for which they were so often persecuted -- even prosecuted -- since George W. Bush, his Republican minions, and the spineless Democratic party have enabled this nation's demise. Rather than being faced off by hundreds, if not thousands of highly armed police on motorcycles, on horseback and in armored vehicles, these OUTSIDE lovers of America should be greeted with wreaths and THANKS instead of arms and tanks. Yet the armies of police patrol every inch of the city in search of First Amendment cage-fillers. 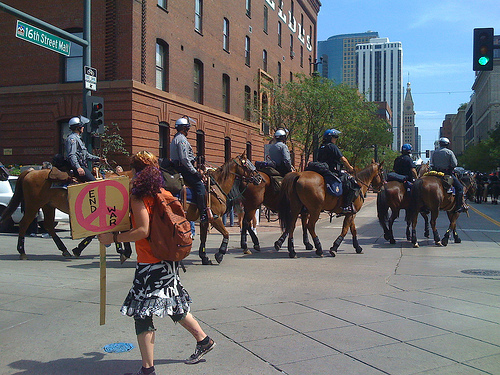 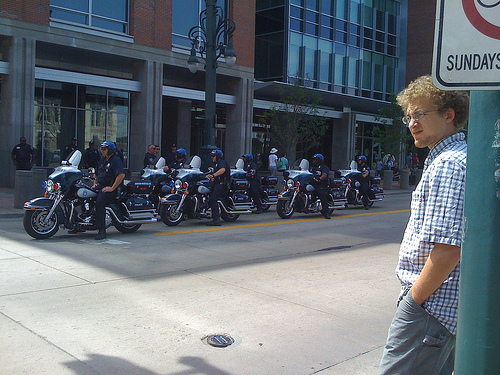 One of the most high profile anti-war groups in the cross hairs of the Denver police at the DNC is the women-inspired peace organization, CODEPINK. Last night, OUTSIDE CODEPINK's ingeniously staged welcome at Mile High Station for blue dog Democrats attending an elaborate AT&T hosted event, the police were out in force. They held members of the peace organization CODEPINK at bey while making way for the parade of vehicles filled with high spending lobbyists and those who have enjoyed their "generosity." CODEPINK sang songs of peace and talked of the outlandish waste of American treasure on war and killing and the support blue dogs have given to this culture of inhumanity. Yet the police faced off against CODEPINK and made way for the fortune seekers and war enablers. There's something terribly WRONG WITH THIS VISION.

Earlier in the day, along the 16th Street Mall, long brigades of black clad police marched, rode horses and commandeered motorcycles. They were escorted by pink clad CODEPINK women on pink bicycles with pink angel wings. Not a weapon amongst them. Yet these environmentally friendly peacemakers were potential cage fillers should they suddenly make a wrong turn. There's something terribly WRONG WITH THIS PICTURE when wings of peace might be caged. 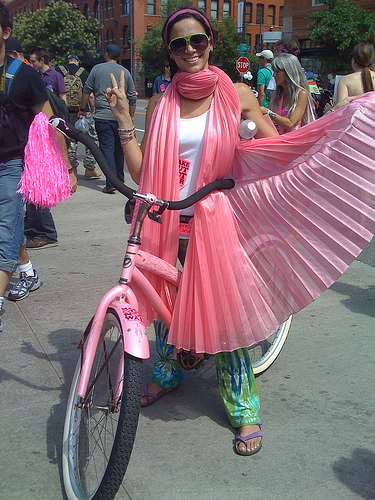 Outside that evening's Mile High Station blue dog event, I spoke with KCNC-TV News 4 reporter, Rick Ballinger. His full time assignment from his NBC affiliate is covering the protests during the DNC. He's been very busy. According to Ballinger, he was the first to break the story on the cages in Denver built to house detainees, first dubbed "Gitmo On The Platte," by CODEPINK staffer and local Denver resident, Zoe Williams. http://cbs4denver.com/denver2008/denver.protesters.arrested.2.793930.html

Ballinger is part of a media force of corporate and independent media paying close attention to the OUTSIDE actions of dedicated patriots attempting to put this nation back on track. While INSIDE lobbyists and giant conglomerates like AT&T pay billions to keep America's agenda on the course of continued militarism and globalization, OUTSIDE patriots like CODEPINK are painting Denver PINK with messages of peace and social justice.

NOTE TO THE ARMED MEN & WOMEN IN PADDED BLACK:

PINK is for peace.
The patriots who have come to Denver this week to participate OUTSIDE in their democracy belong ON THE STREETS and NOT IN YOUR CAGES!!! In fact, the OUTSIDE patriots who fill Denver's streets, understand INSIDE TRACK ON DEMOCRACY!!!