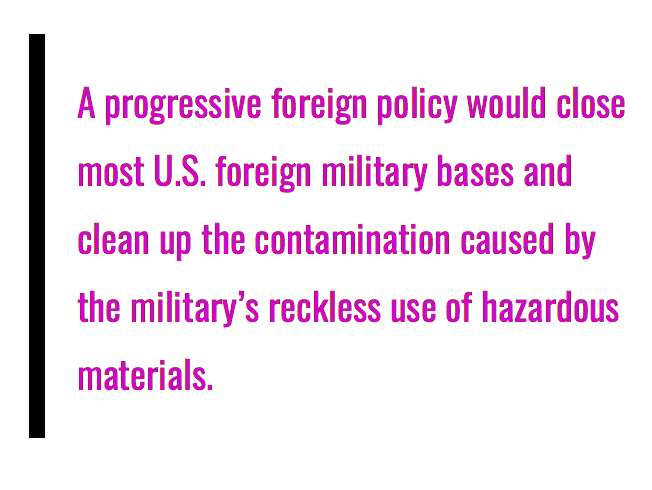 It is fascinating to see how the foreign policy positions put forth by most of the Democrats running for President are strikingly progressive when compared to the policies passed by Congress. Bernie Sanders gets huge applause when he talks about Palestinian rights, yet Congress continues to give unconditional support to Israel—as does, of course, the Trump Administration. Most candidates talk about cutting the enormous military budget to pay for critical domestic programs, but Congress—including its Democrats—votes every year to shower the Pentagon with more money.

Given Trump’s bravado, it’s easy to forget that he actually ran on an anti-interventionist platform. Once in power, he hiked U.S. troop deployments. In Afghanistan, the Taliban now control more territory than when the United States first sent troops there in 2001, and corruption in the U.S.-backed Afghan government is endemic. In Iraq, people have been rising up against foreign interference and their own corrupt government. In Syria, the U.S. has been just one of many foreign forces prolonging the war. And now, with the reckless decision to order the murder of Iranian General Qasem Soleimani, Trump has opened the door to a protracted conflict in Iran, and sent thousands more troops to the region.

Why do candidates take more progressive positions before they are elected? Because they are vying for votes, not catering to corporate lobbyists. They know that polls show most Americans want to see a less militaristic and more enlightened foreign policy. The stark difference between campaign rhetoric and policy only illuminates the stark difference between the people’s interests and the corporate interests favored by most politicians.

So what would a foreign policy untethered to corporate interests look like? In broad strokes, it would jettison the imperial framework of “American exceptionalism” and instead respect the sovereignty of other nations. It would focus on international cooperation, conflict prevention, and peacebuilding. It would embrace the same values of human rights and justice that progressives seek at home, lifting people out of poverty, empowering workers, and combating the catastrophic effects of climate change.

With a different person in the White House, how could we move toward such a transformed and transformational foreign policy? Here’s how:

Such a transition requires moving away from the current war economy that distorts our society, enriches the war profiteers, and pours more than $700 billion of our tax dollars into the Pentagon every year.

New coalitions have formed to counter the powerful lobbies that keep feeding the Pentagon. These coalitions have concrete proposals for cuts, ranging from the call by Put People Over the Pentagon to trim $200 billion in Pentagon spending per year to the more radical Poor People’s Moral Budget that slashes the budget in half, identifying $350 billion in cuts. The billions saved could be redirected to domestic needs, such as the Green New Deal and Medicare for All, as well as for reconstruction and humanitarian aid in countries damaged by our wars.

And the United States could save billions—and make itself safer—by closing its military bases overseas. There are now more than 800 U.S. bases in more than eighty countries around the world. Many are relics of the Cold War and have no remaining strategic value.

In some countries, local opposition to military bases has generated anti-American sentiment that jeopardizes our national security. Some bases, like the ones surrounding Iran, are sitting targets should there be an outbreak of hostilities. The good news is that there is almost no domestic constituency for these bases, making them easy to cut. A progressive foreign policy would close most U.S. foreign military bases and clean up the contamination caused by the military’s reckless use of hazardous materials.

The United States should join the United Nations’ Treaty on the Prohibition of Nuclear Weapons and scrap the Obama-era commitment to a massive upgrade to the U.S. nuclear arsenal, which will fuel the arms race and cost U.S. taxpayers $1.2 trillion over the next thirty years.

We should revisit our commitment to the F-35, the most expensive weapons system ever built. Over its lifetime, the F-35 will cost an estimated $1.5 trillion. Despite massive cost overruns and more than 900 performance deficiencies, the program has had strong Congressional backing because its parts are manufactured or assembled in 350 Congressional districts, where it is touted as a way to create jobs. While it’s too late to cut the whole program, we could save billions by cutting back on F-35 orders.

The United States needs to extricate itself from the disastrous post-9/11 war on terror by withdrawing all U.S. troops from Afghanistan, Syria and Iraq—especially after the Iraqi Parliament voted for such a withdrawal. This certainly could be done more effectively than Donald Trump’s unplanned, uncoordinated, and erratic actions in Syria, which gave a green light for Turkey to slaughter the Kurds. U.S. withdrawals must be coordinated with our allies and be part of diplomatic processes organized by the United Nations and others.

A demilitarized foreign policy would require rescinding the outdated and much-abused Authorizations for Use of Military Force enacted in 2001 and 2002 after the 9/11 attacks and used ever since to justify unrelated U.S. military interventions. Rescinding this legislation would force Congress to reclaim its Constitutional authority in matters of war and peace.

The Trump Administration’s devastating withdrawal from the Iran nuclear deal and imposition of brutal economic sanctions, along with the murder of Iranian General Soleimani, has put us on a collision course with Iran. We must rejoin the nuclear deal, lift the sanctions, and begin a process to normalize relations with Iran.

Similarly, a progressive policy toward North Korea would be very different from the erratic diplomatic initiatives of Donald Trump. It would replace the current armistice with a real peace treaty that would finally put an end to the Korean War. It would stop the provocative military exercises with South Korea, lift the economic sanctions, and begin economic cooperation. Only then will North Korea’s leadership be willing to give up nuclear weapons.

Revamping our foreign policy also means revamping our overseas alliances. A good place to start would be getting rid of the North Atlantic Treaty Organization, or NATO, an anachronistic relic of the Cold War. With the collapse of the Soviet Union in 1991, NATO should have disbanded but instead expanded toward Russia’s border, despite assurances to Russian leaders that the alliance would not move further east. NATO then moved even further away from the North Atlantic by invading Afghanistan in 2001 and Libya in 2011.

With its massive war games, NATO continues to provoke tensions with Russia. Its goal that all members spend at least 2 percent of their gross domestic products on the military fuels the arms race. And Article 5 of the treaty, which states that an attack against one member “shall be considered an attack against them all,” obligates the United States to go to war on behalf of twenty-eight other nations. Dismantling NATO would free us to form alliances not based on militarism.

Saudi Arabia, one of the most repressive and dangerous regimes on earth, has shamefully become a key U.S. partner and the number one purchaser of U.S. weapons. The U.S.-backed, Saudi-led war against Yemen has led to the world’s worst ongoing humanitarian crisis.

The United States must end arms sales to the kingdom. It should sanction Saudi leaders involved in the murder of journalist Jamal Khashoggi, including Crown Prince Mohammad bin Salman. And it should pressure the regime to release Saudi women activists, respect the rights of free speech and free assembly, and stop spreading its intolerant perversion of Islam, Wahhabism, around the world.

Our unconditional support of Israel also must end. The U.S. provides $3.8 billion to the Israeli military every year; supports the siege of Gaza; protects Israel diplomatically in the United Nations so Israel is never held accountable; violates international law by recognizing Jerusalem as Israel’s capital and moving the U.S. embassy to Jerusalem; supports illegal settlement expansion; and cuts funding for U.N. Palestinian refugee assistance.

While the pro-Israel lobby still holds enormous sway in the White House and Congress, public opinion on Israel is changing dramatically. Several Democratic candidates, including Senators Sanders and Elizabeth Warren, have called for making U.S. aid conditional on adherence to human rights and international law. Rather than mouth platitudes about a “two-state solution” that has become impossible due to Israel’s ever-expanding settlements, we must advance a policy based on human rights.

Stop the constant search for enemies

Efforts to wind down U.S. intervention in the Middle East should not be used as a pretext for ramping up conflicts elsewhere, particularly with Russia and China. The anti-Russia sentiment that has emerged with the allegations of Russian interference in U.S. elections; the increased sanctions on Russia; and the U.S. withdrawal from the Intermediate-Range Nuclear Forces Treaty have led to a dangerous, Cold War-like atmosphere.

Meanwhile, U.S. officials portray China, with its increasing influence in Africa and Latin America, as an economic adversary, a potential military threat, and a threat to U.S. economic interests. But viewing Russia and China as threats only justifies more military buildup. This is also true in West Africa, where the U.S. has been expanding its military presence in countries like Niger, and in Latin America, where the U.S. has a history of domination and the Trump Administration has openly resuscitated the imperial Monroe Doctrine.

We need to stop making new enemies and instead join forces with major powers like Russia and China to help uplift other parts of the world, particularly in the Global South.

A progressive foreign policy would not support governments that come to power through coups, as with Honduras in 2009 or more recently Bolivia. It would re-establish full diplomatic relations with Cuba, and lift economic sanctions on Venezuela, Nicaragua, and Cuba, support organizations within other nations that seek to empower the poor and address the climate crisis.

It would also be generous with humanitarian aid and more supportive of refugees, especially those fleeing violence that our government had a role in creating. At home, it would lift the Muslim ban and end the inhuman treatment of migrants at the U.S.-Mexico border.

As we move away from an imperial, militarized foreign policy towards one that embraces global cooperation, human rights, and international law, we need a fully-funded State Department staffed with professional diplomats rather than political appointees and campaign donors. Perhaps more importantly, we need an educated, alert, and active public. We saw what happened during the Obama Administration, when the peace movement fell apart because people assumed that Obama would be a “peace president,” which he wasn’t. Under Trump, we have been scrambling to quickly rebuild the movement to stop a war with Iran.

A citizenry interested and engaged in foreign affairs can counterbalance the forces that profit from war. A Department of Peace, first proposed by former Congressman Dennis Kucinich, could promote citizen diplomacy, educational exchanges, sister cities, and other creative people-to-people ties. A public that cares about the rest of the world and is constantly pushing our elected officials—in the streets and in the suites—is the best guarantor of a foreign policy that truly promotes a more just and peaceful world.

Medea Benjamin is the co-founder of the peace group CODEPINK and author of ten books on foreign affairs.