When Jon Stewart was on Larry King's show talking about his Rally to Restore Sanity, he likened himself to Alice in Wonderland and the rally as the Mad Hatter Tea Party. But is Jon Stewart really Alice, trying to find sanity in an upside-down world? Or is he the March Hare, the ultimate "slacktivist" who thinks it's always teatime -- time to sit back and jibberjabber?

The 10-30-10 rally on the capital's mall is looking more and more like a celebration of "slacktivism." Stewart is courting people who do not want to open their window and yell, "I'm mad as hell, and I'm not going to take it anymore!" As he says in the Rally for Sanity website, he's looking for the people who've been "too busy to go to rallies, who actually have lives and families and jobs (or are looking for jobs)."

So let's get this straight: people who were so horrified when the U.S. invaded Iraq that they joined millions of others to protest are not sane? We shouldn't speak out against Wall Street bankers whose greed led to millions of Americans losing their jobs and homes? It's irrational to be angry when you see the Gulf of Mexico covered in oil because BP cut corners on safety? Don't get upset when the Supreme Court rules that corporations are people and can pour unlimited funds into our elections?

Stewart often roasts the warmakers and corporate fatcats on his show, but he seems to think that his viewers should be content to take out their frustrations with a good belly laugh.

When Jon Stewart announced the Rally to Restore Sanity, he included CODEPINK among the "loud folks" getting in the way of civil discourse. He also equated progressives calling George Bush a war criminal with right-wingers calling Obama Hitler.

So we started a facebook page asking Jon Stewart to invite us on the show to set the record straight. Beware of what you ask for. We did, indeed, get a call from the producers but it was not for a live interview with Jon Stewart. No, it was for a taped session with myself, a Tea Party organizer and a tear-gas dodging, anti-globalization anarchist "giving advice" to Daily Show's Samantha Bee about how to organize a good rally. It was clear they wanted to portray us as the crazy folks who should not come to their rally for reasonableness.

I consulted with my CODEPINK colleagues. Some said, "Don't do it. It's a trap and will only further marginalize us." We'd already been ridiculed several times on the show, like when we stood up to question General Petraeus at a Congressional hearing or when we organized protests at the Marine Recruiting Center in Berkeley. But the majority of my colleagues thought it would be crazy to decline the chance to get an anti-war message out to millions of viewers.

The producers told us to come to the New York studio "in costume." The anarchist, Legba Carrefour, was all in black, including a black bandanna covering his face. The Tea Partier, Jeffrey Weingarten, came in patriotic red, white and blue. I decided to "go professional," with a CODEPINK t-shirt and a gray suit. The producers were disappointed. They had wanted me to appear in one of the wild outfits we have worn in Congress -- like a hand-lettered pink slip accessorized with a hot-pink boa and a glittery "no war" tiara.

But my attempt to look professional was thwarted by the fourth guest who suddenly appeared and was positioned right behind me: A huge, scary puppet head of Iranian President Ahmadinejad.

So there we were, four "crazies" being quizzed by Samantha Bee for over two hours. She started out with softballs -- what did we stand for, what activities did we engage in. Then the questions and the antics got sillier and sillier. By the end we found ourselves spinning a blind-folded Samantha Bee around, then watching her swing a baseball bat at Ahmadinejad's head to see if it was really a pinata.

I'm sure that with over two hours of tape, there will be plenty of footage to turn into a four-minute segment showing us as a bunch of nutcases. After all, it is a comedy show.

But it's too bad that Jon Stewart, the liberal comedian, is putting anti-war activists, tea partiers and black bloc anarchists in the same bag. And it's sad that he's telling his audience -- many of whom are young progressive thinkers -- that activism is crazy.

An anonymous assistant on the Daily Show's blog chastized CODEPINK on line. "Dipping hands in fake blood or screaming over everyone just makes you look crazy and then the rest of the country ignores you." He said that we should, instead, focus on solutions.

CODEPINK has been proposing solutions since the day we started. We risked our lives meeting with UN weapons inspectors in Iraq right before the U.S. invaded to see if war could be avoided. We have repeatedly traveled to Afghanistan to push for reconciliation. For the past eight years we have been posing solutions about how to deal with terrorism, how to extricate ourselves from the wars in Iraq and Afghanistan, how to make us safer at home. Whether under Bush or Obama, our voices of sanity have been drowned out by a war machine that makes billions selling weapons and hiring mercenaries.

Meanwhile, we've witnessed the agony of mothers who have lost their sons in these senseless wars, the unspeakable suffering of our friends in Iraq and Afghanistan, and the lavish spending on war while our schools and hospitals are gutted.

It was because of this insanity that we began to interrupt the war criminals during their public appearances, shouting -- yes, shouting -- for an end to the madness. It was because of this insanity that we put fake blood on our hands to represent the hundreds of thousands of innocents who died as result of their lies. In our post-9/11 24/7 news cycle, we learned that the more audacious and outrageous the action, the more likely we were to get our anti-war message into the national conversation.

For this the Daily Show calls us crazy!

Don't get me wrong. CODEPINK women love to laugh and we try not to take ourselves too seriously. But we do feel that it's the sane people who protest crazy wars, who cry out against the dangers of global warming, who rail against big money in politics, who implore our politicians to spend our resources rebuilding America, not bombing people overseas.

Jon Stewart says he wants to restore sanity to Washington; so do we. We'll see you out on the mall, Jon.

Medea Benjamin is co-founder of CODEPINK and Global Exchange. CODEPINK will be organizing a Mad Hatter Tea Party at the Rally to Restore Sanity. Her "interview" with Samantha Bee will be aired on the Daily Show on Thursday. 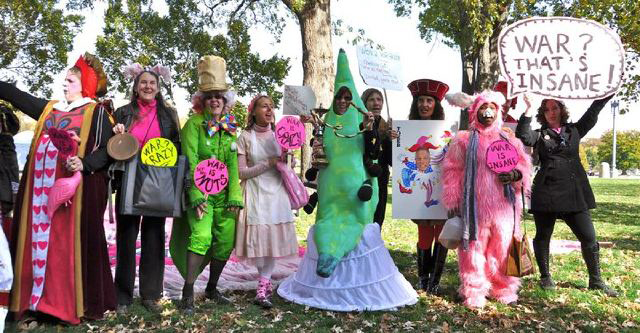 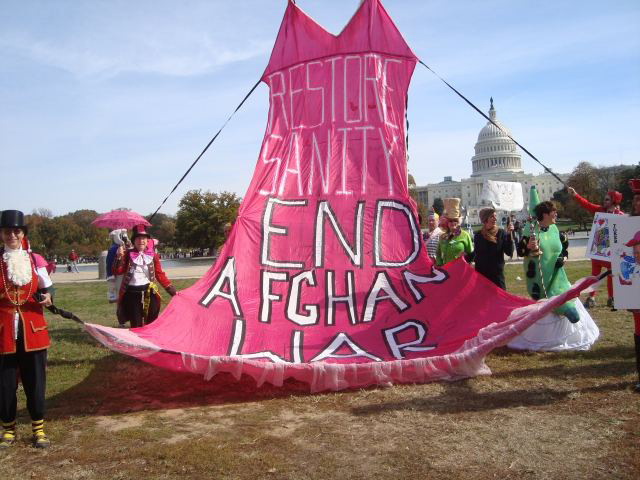