Day 3 in Afghanistan: The palaces and projects of Kabul

I end this day feeling the total lack of possibility—a rare feeling as I live by the motto that in God all things are possible. I go to each meeting hoping to turn the rock over and learn what can be offered into the bounty of need and lack we witness with every step and breath. And yet… 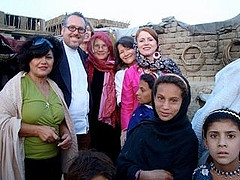 What we do find are beautiful, amazing, passionate, heartful people doing work for those in need against all odds here—odds that are tremendous. It makes me feel so inadequate. These women and men are courageous beyond anything we can ever touch in the US. As activists working for the greater good, our lives are not in danger each day. However, here, the people we’ve met who are doing good work have had their lives have been threatened or they have lost members of and sometimes almost their entire family. The amount of patience and ingenuity they need to get even the most simple thing done is beyond my comprehension. They have all created something small and tireless, but with the quarter of a trillion dollars we have spent on Afghanistan in the last 8 years, it makes you want to cry with anger and ask if this if this is all there is to show for it? It is a strange convergence of so much need and so much waste.

I am even angrier at Bush (if that is possible) and more horrified that Obama advocates sending 40,000 more troops—a huge mistake and a waste of even more money and lives. Oh these boys and their toys! They sell us horror stories without acknowledging how they destroy so much and contribute to the horror in the process. The dysfunction of the NGO/UN/USAID world is coupled devastatingly with the corruption of the US writ large on the new government of Afghanistan. Those people wanting and working to make a difference are locked in an impossible, incoherent maze of rules of the game. We’ve been calling this maze “The Elephant”—as we touch a trunk here, a tail there, and wrinkled thighs in the dark—each touch revealing only the mysterious and unknowable, a deeper mystery with each new fact we acquire.

Our day started at Turquoise Mountain which was started by Rory Stewart, the courageous Brit who has walked the entire country of Afghanistan. He is gentrifying Old Kabul to the horror of those poor Afghans who onces called it home—but in exchange, is creating an artisan school to save the arts of Afghanistan such as woodworking, calligraphy and gem cutting. Young men and women work hard at their craft with the country’s most prized artists as their teachers. Their work is beautiful and sold to some of the most impressive clients, but it is rarified and extremely expensive. It is funded by USAID and the Canadian Government as a showcase project.

From there to HOPE International which is a step down from Turquoise Mountain, but still very much a part of the NGO Industrial Complex. To that extent, we certainly gained insight into the game from the almost all-male staff who fish for contracts and fulfill them. They are not really experts in the field—but rather experts in getting the contracts. The only woman employee was the wife of the finance officer. She is not allowed to leave the compound and has been there for two years. I asked her if she doesn’t go crazy and she said it has become life—at night they watch movies and play card games and this is her family. They made us a lovely meal, shared horrifying stories of arranged marriages as well as thoughts on how it’s perfectly fine for their wives to be confined to their homes. Apparently, it is what their wives want because they are illiterate and shy to meet any other men. (?????) 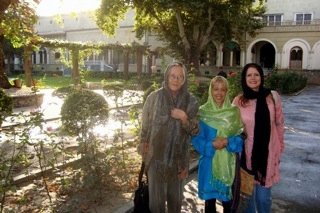 There is so much to do and see that we split up in the afternoon. Ann, Paul, Medea and I went to the King’s Palace today to meet with the Deputy Security Advisor to the President. He towed the party line so completely that we all fell asleep. However, the economic advisor who took a meeting with us had some truly excellent ideas about how to stimulate the economy. It took us roughly fifteen minutes to get through all forms of security upon both our entry and exit from the compound. The first thing we noticed once we were inside was how incredibly quiet it was—an eerie emptiness, lacking in any gravity, energy or activity. This was the day after Obama crowned Karzai President again, even though EVERYONE knows the elections were a complete sham. A recurring question, everywhere we go is, “The US is the power in this country, they pay for everything, why can’t they do something about the corrupt government? Why can’t they hold these people responsible?”

The Afghans don’t really trust anyone anymore and they see no justice. We are learning that one of the principle reasons the Taliban has power in the provinces is that they dispense justice. The other is they provide higher-paying jobs—from twice as much to more. Something terrible percentage—roughly 90%--of all the $250 billion spent in the last eight years never made it to Afghanistan. Rather, it was spent in the states, was used to higher anyone but Afghans, or purchase products made and sold by anyone but Afghans. After talking with so many people from so many walks of life, one awful fact that is emerging is that the USAID is one of the major, indirect funders of the Taliban. Through their contractors, they hire members for security or bribe them to complete projects in Taliban-controlled areas.

While we were at the Palace, our fellow delegation members visited a Maternity Hospital and the Human Rights center. Everyone remarked at how impressed they were with the courage of the women who do this amazing and—in this climate—dangerous work. That continues to be our consolation in the face of all that is so corrupt, badly run and practically hopeless here: the incredible, super-human contributions that courageous citizens make every day to build a future for the ravaged country they love so dear.