Today was, unfortunately, our last day in Gaza. When we entered, we were told that all foreigners who entered through the Egyptian side would have to leave Gaza by February 5. To get inside, we had to sign a statement agreeing to leave by that date. Since we all had many obligations to get back to in the US, we decided it wasn’t worth staying an extra day or two and risk not getting out.

Given our time constraint, we split up to cover more ground. Ann and Tighe went with reps from the Palestinian Medical Relief Society on a trip to the north, looking at the areas worst hit by the Israelis.

I wanted to make contact with some of the women’s organizations to lay the groundwork for returning with a larger delegation for March 8, international women’s day. So I went to the offices of the Women’s Affairs Center, where I met with two wonderful representatives—Amal and Hala. They told me about their work in training and advocacy for women, and we discussed how we could work together for International Women’s Day. They called their director Naila Ayesh in Ramallah, who was very eager to collaborate with the international delegation.

Next on my agenda was the United Nations Relief and Works Agency (UNRWA). I had numerous names and numbers, but none of them seemed to work, so I decided just to go. At the gate of the main headquarters, I asked to speak with someone from the Gender Division and was ushered in to meet a dynamic woman—Jacqueline Paul. Jacqueline said a quick hello and was about to run off to a meeting when I mentioned our idea of bringing an international delegation for women’s day. Her eyes lit up and she said, “That’s just what my meeting is about; let’s go.” So she took me to meet her colleague, Laila Al Bayoumi, and together we talked about ideas for International Women’s Day. UNRWA  usually organizes activities with grassroots women’s groups all over Gaza on March 8, and they felt that this year, given what the women have been going through, it was particularly important to lift their spirits for at least a day. “In addition to the political problems, the women of Gaza are often invisible as women and only seen as breeders [the average number of children is over 7 per family!!!],” Jacqueline said. “This is the one day we can so something special for them as women.”

Jacqueline and Laila loved the idea of the international delegation, thinking that local women would be moved to know that people around the world cared about their plight. We talked about gift baskets we could bring for the women, including vitamins, soaps, pink headscarves. They proposed the international delegates be divided and sent to several different cities/towns to join in the local activities. To my delight, they offered to coordinate the delegation’s logistics and schedule during our stay in Gaza, and provide a letter of invitation that could help us get through the border. It would still be difficult to get in, and we will need a contingency plan in case we are not let in, but certainly having a UN invitation will make it easier. I left the meeting feeling very enthusiastic about the role we could play in paying tribute to the women of Gaza.

With the most important meetings taken care of, I asked our driver—Waled—if he could show me some more of the effects of the Israeli invasion. He took me by the Quds Hospital, one of the  largest hospitals in Gaza. 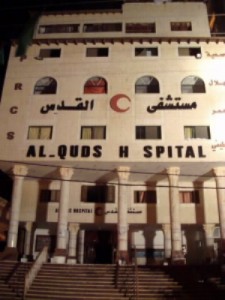 The whole neighborhood around the hospital was blown apart by bombs, shells and ground fire. The devastation was shocking, with entire buildings devastated, apartments with gaping holes in the walls, cars crushed by tanks. 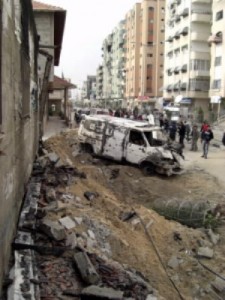 We had met a woman from Gaza in the Rafah airport (she was leaving for Cairo) and she told us that her husband, Dr. Walid Abramadan, was the medical director of the Quds hospital. I asked for him at the reception, and was ushered into his office, where he was meeting with several of the senior doctors. He very graciously took time from his meeting to show me the damage. Furious at the Israelis, he showed me the shells he had saved, each with a Made in USA stamp on them. One hit near the pediatric unit, where babies were lying in incubators; another hit the pharmacy on the second floor.  The major damage, however, was done to two of the buildings connected to the hospital—the Palestine Red Crescent Society administrative building and the Society’s Cultural Center. The cultural center, which had been a rehab center for patients, was totally destroyed. 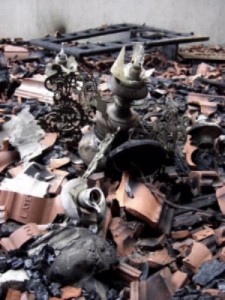 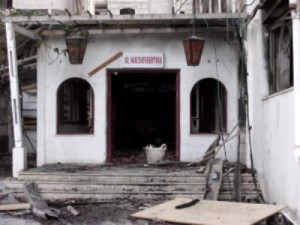 Even several of the hospital’s ambulances were destroyed. 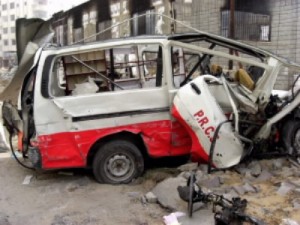 Walid took me to visit other bombed out areas in the city. A children’s playground called Barcelona, a small oasis within the crowded city, was flattened by tank tracks and contained the twisted remains of children’s play structures.

The American School, Gaza's only international school, is now a huge mass of tangled wire and broken concrete slabs. Even the UNRWA Field Office in Gaza City had come under Israeli fire. Millions of dollars worth of food, medicine and other humanitarian aid were destroyed when white phosphorus and artillery shells hit the compound.

Later in the afternoon I hooked back up with Ann and Tighe, and the Medical Relief folks took us along the southern route back to Rafah, showing us where the former Israeli settlements were, where the tanks rolled in during the last invasion, and where more bombs destroyed homes and schools and businesses.

In Rafah they took us to see the amazing tunnels that are used to illegally transport goods from Egypt into Rafah (see Ann’s blog). At about 5pm, we reluctantly went to the border crossing.

Just as when we came into the country, when we left we were greeted by government (Hamas) official greeters who wanted to see down and talk. The official—Ahmed Alnajjar-- was a tall, green-eyed American looking fellow who was actually a native of Gaza. Ahmed normally headed the international affairs department at the Ministry of Education but had been seconded (probably because of his English) to work with foreign visitors. He asked us about our visit, but thankfully didn’t pry into who we met with or where we went. He just asked about our impressions. We ended up talking with him about the educational system in Gaza, the universities (Islamic, Al Aqsa and Al Azhar), the damage to the educational system caused by the invasion (7 schools totally destroyed, 135 damaged, 15 teachers and 54 students killed), and, of course, U.S. policy. Just like everyone we met, Ahmed expressed hope that Obama would be different, that he would not be one-sided in support of Israel but would also care about the plight of the Palestinians. We exchanged emails (and he wrote to us immediately) and said he would like to help facilitate exchanges with American students (“We have to broaden the knowledge of our people and their understanding of other cultures” said this representative of Hamas.)

Our hearts heavy with all the death and destruction we had seen, we returned to Egypt. We are determined to return to Gaza in just a few weeks. The more people who come and see the reality of this beleaguered people, the better, The more we can put pressure on the US, Egyptians and Israelis to open the borders, the better. To join the upcoming delegation on March 6, contact [email protected]