D12: Occupy the Ports for Peace and Justice

Thousands of OWS protesters gathered at dusk, and throughout the day, on Monday in a coordinated effort to shut down west coast ports to disrupt and blockade the economic apparatus of the 1%. The ports were effectively shut down in Oakland, Long Beach, Portland, Seattle and Vancouver sending a strong message that we will no longer stand by while the top 1% continue to line their pockets at the expense of people and the environment. This action specifically targeted financial giant Goldman Sachs and their SSA Marine port operator, who are exploiting longshoremen and port truckers and polluting the environment.

The Coalition for Clean and Safe Ports published a statement by port drivers thanking the Occupy protesters and describing the poverty and pollution that plague the ports.

Solidarity demonstrations in support of this West Coast port action took place across the country and as far as Japan. More than 200 Occupy Wall Street protesters marched to the Goldman Sachs headquarters. Protesters faced police in riot gear, showing once again that they protect and serve the needs of the 1%. 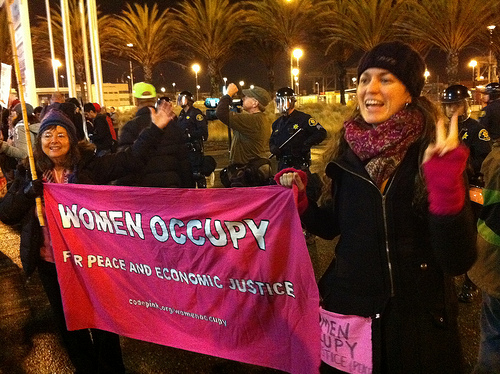 I returned home footsore but satisfied after a great CODEPINK showing for this afternoon's port shutdown.
Betsy Rose, our singer-songwriter, led a group of us in lively songs including her new lyrics to an old American classic at 14th and Broadway as hundreds gathered for a rally before the march to the Port. We changed the lyric "Gonna lay down my sword and shield down by the riverside" to "down by the waterfront".
Many people took photos and videos, helped themselves to some food I brought, accepted "Why CODEPINK supports" flyers,
sang, smiled and expressed their appreciation.

Just before the march, led by at least a dozen young veterans behind a HUGE yellow "PORT OCCUPY" sign, stepped off, we Occupella singers positioned ourselves a block down the march route on 14th Street. We sang to the 1000 or so marchers, mostly a young(er) and happy crowd, and their faces lit up as we sang "This Little Light of Mine" and other beloved songs.

We then took BART to West Oakland, where we were joined by the Brass Liberation Orchestra, other codepinkers from San Francisco, and a feeder march. We marched into the Port. We received the good news that the evening work shift had also been shut down. Some of us continued deeper into the Port to assist with holding the two closed berths where loaded ships awaited.
Both the day and evening shifts were shut down at the Port of Oakland on this historic day, a strong showing of community opposition to police brutality, and support for peaceful direct action against the 1% as represented by SSA Marine, a shipping company partly owned by Goldman Sachs.