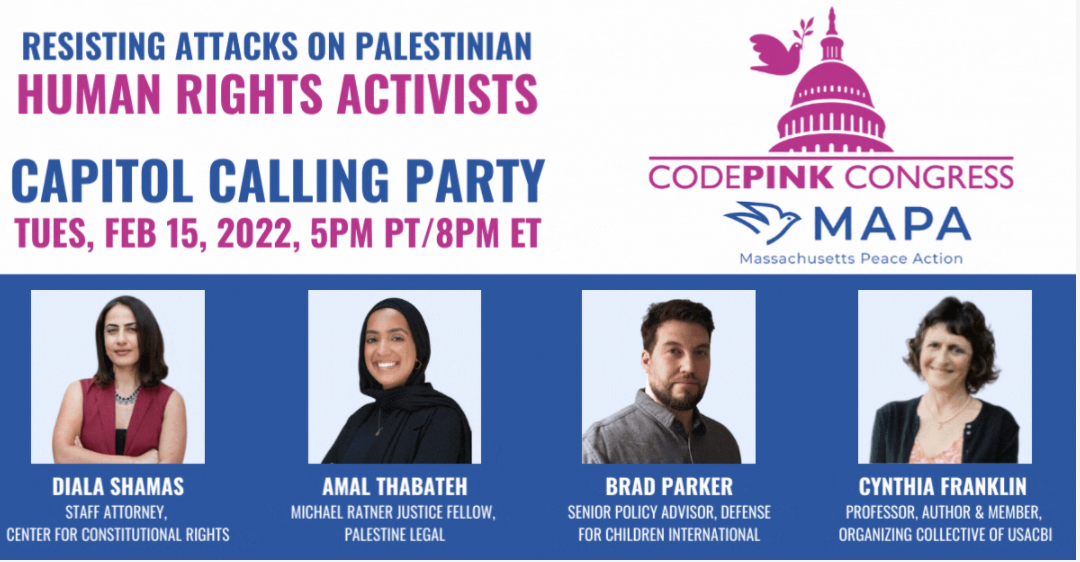 This past Tuesday, February 15th, CODEPINK Congress co-hosted a powerful actionar with Massachusetts Peace Action focused on Palestinian human rights activists who have been resisting repression from both Israel and the United States.

Amal Thabateh of Palestine Legal spoke to the rapid spread of anti-Palestine and anti-Palestinian activism laws, like anti-boycott laws - and how a growing number of people are recognizing these laws as unconstitutional.

Brad Parker of Defense for Children - Palestine discussed Israel’s designation of 6 Palestinian human rights groups as “terrorist organizations”. Speaking from his experience working at one of the six designated groups, Brad discussed the harm and implications of these organizational terrorism designations.

Finally, Cynthia Franklin discussed the campaign Against Canary Mission, which is working to resist Canary Mission’s harassment of activists for Palestine and instead uplift and celebrate anti-apartheid activists. Cynthia powerfully summarized: Zionist hate groups like Canary Mission will never be able to fully silence those working collectively for decolonial futures.

Make sure to register for the next event in CODEPINK Congress and Massachusetts Peace Action’s special series in foreign policy: Ukraine Crisis: NO to NATO, Yes to Peace with Russia.