Congress should support democracy in Bolivia 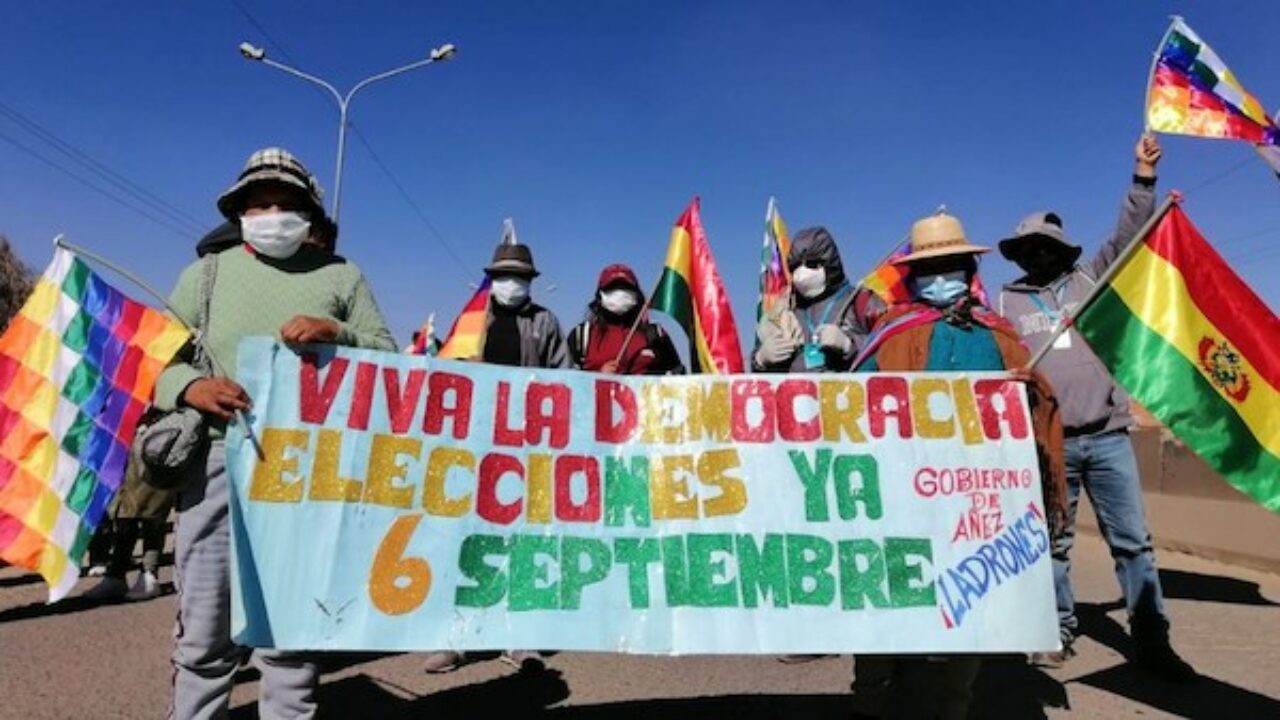 Thousands of pro-democracy demonstrators have been blocking highways in Bolivia for the past week. They demand immediate elections and the resignation of Jeanine Añez’s interim government. The scenes are eerily reminiscent of the days following the November coup that ousted former president Evo Morales, just prior to the massacres in Senkata and Sacaba, where dozens of peaceful protesters were gunned down.

At this point it should be non-controversial to describe Morales’ removal as a coup. His forced resignation was considered by some to be justified because of alleged fraud in the country’s October 2019 presidential election. These allegations were promoted heavily by the Organization of American States (OAS), but they have been shown to be false. In separate studies, the Center for Economic and Policy Research (CEPR), investigators from MIT’s Election Data and Science Lab and the New York Times all reached the same conclusion: the OAS had no basis to declare the elections fraudulent.

OAS Secretary General Luis Almagro publicly lashed out at these reports in a bizarre press release that criticized the New York Times’ coverage of the Holocaust, among other things. He has since joined the interim government in condemning the protesters, accusing them of impeding the transportation of COVID-19 supplies, despite video evidence showing the lifting of road blockades to allow these supplies through.

Añez’s administration, which came to power in November 2019, has postponed elections three times on the grounds that coronavirus would make voting unsafe. Meant to only be caretakers until new elections could be held, the administration has taken major decisions that have little popular support, including pushes to privatize the nation’s vast lithium reserves and its education system. Recently, the Justice Ministry announced it will bring charges of “attempted genocide” against Evo Morales, who is now living in exile in Argentina, and against Luis Arce, the leading presidential candidate. They are accused of causing COVID-19 patients to die by fomenting the protests, although there appears to have been no increase in coronavirus deaths since the roadblocks began on August 3. Both Morales and Arce belong to the MAS party, which has been consistently leading in polls.

This is the second time Arce has been threatened with criminal charges; January 2019 charges for corruption against him were dismissed after an initial court hearing. These attacks on Arce are part of a pattern of intimidation and persecution of MAS officials,100 of whom are facing charges or have been detained in 2020. This figure comes from Harvard Law School’s International Human Rights Clinic, which recently published a comprehensive report detailing the interim government’s “state-sponsored violence, restrictions on free speech, and arbitrary detentions [that] contributed to a climate of fear and misinformation that has undermined the rule of law as well as the prospects of fair and open elections.”

There is a looming threat of more human rights violations. Videos from last weekend’s protests show planes flying dangerously close to the ground, buzzing over the demonstrators Luis Fernando Camacho, a key figure behind the coup, warned Añez that he would mobilize his supporters to confront protesters; within hours clashes and injuries were reported on the ground. Morales cautioned that another coup was in the works, a legitimate possibility in a country that has seen nearly 200 coups in 200 years.

Stability is not out of reach for Bolivia, but the interim government must be pressured to avoid further tragedy and guarantee prompt, free and fair elections. This is an opportunity for U.S. Representatives Brad Sherman, Gregory Meeks or Joaquín Castro – all reportedly in the running for the next chairmanship of the House Foreign Affairs Committee – to demonstrate their leadership in the international arena.

There are several steps that they, or any other member of Congress, could take to be firmly on the side of Bolivian democracy. The first, and easiest, would be to signal to the Añez government that the world is watching and will not tolerate further violations of human rights and further postponement of elections. They should also make it clear that the United States will not recognize another coup government.

Next, Congress should help find an impartial monitoring body for the upcoming presidential elections. A U.S. congressional delegation would be helpful, but given the U.S. electoral season, it might not be feasible. The OAS has little credibility on this front and should not be involved. The most reasonable candidate to monitor the vote would be the United Nations, which would require both an invitation from the Añez government and UN willingness. Neither of these would be impossible given the stakes. Barring the UN, a suitable non-governmental organization could be found, such as the Carter Center.

Finally, Congress should investigate the OAS role in the 2019 Bolivian elections since, as one report put it, its electoral mission’s “dishonest,  biased,  and unprofessional conduct has caused serious damage to the country’s democracy.”  U.S. funding accounts for nearly 70% of the OAS budget, making an investigation within the scope of Congress. The next House Foreign Affairs Committee chair will face a hemisphere battered by the pandemic and in deep economic recession. Smart leadership could at least assure that the OAS, the region’s premier multilateral institution, is credible.

Leonardo Flores is a Latin America policy analyst and campaign coordinator with CODEPINK.