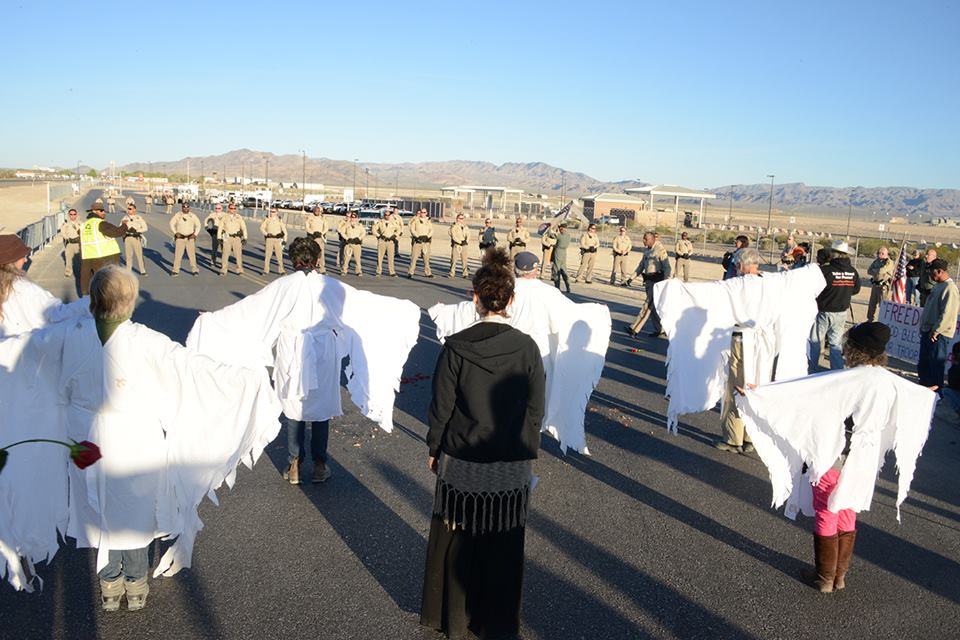 As the sun rose over the mountains, 150 activists with CODEPINK and our allies gathered in the desert outside Las Vegas last week to shut down the gates to Creech Air Force Base, home of the Reaper and Predator drones program. For over an hour on both Thursday, March 31 and Friday, April 1, activists protested, performed and called for peace. This was no April Fools’ joke but a serious mobilization of people from more than 20 U.S. states who stepped over the line to confront the airmen who control killer drones.

Join us in calling on the Presidential candidates to end drone warfare and adopt our ten-point peace platform. We want a #President4Peace!

"Many Creech personnel arrived to the base before the normal 6-8am rush hour on Friday, presumably to avoid the protest.  Activists who participated in this collective effort consider that a success because the protest is having a direct impact on daily drone operations.  These sustained actions are forcing the military to change their daily routines, and potentially stimulating more discussion about the drone policies in question and the growing national opposition to drone killing,"  says Toby Blomé, one of the organizers.

This is our second annual mass mobilization at Creech AFB, and one of many actions taken by CODEPINK to end the drones program. President Obama recently confirmed that there was “no doubt” that “civilians were killed that shouldn't have been” in U.S. drone strikes. All of the remaining major party candidates for President support the continued use of drone warfare.

Join us in demanding that Hillary Clinton, Ted Cruz, John Kasich, Bernie Sanders and Donald Trump oppose the further use of drone warfare and promise to end drone strikes when in office!

We will be back at Creech AFB in the fall. For more information on CODEPINK’s Ground the Drones campaign, click here.

For a peaceful world under drone-free skies,

P.S. To learn more about drone warfare, show your opposition to drone strikes and support CODEPINK, you can purchase Medea Benjamin’s explosive exposé Drone Warfare: Killing by Remote Control or these “Drone-Free Zone” t-shirts - in pink or grey - in the CODEPINK store!