By Charles Davis and Medea Benjamin

One could be forgiven for thinking there's anything honorable or honest about Colin Powell. For more than two decades now the Washington media has portrayed the former Secretary of State as something of a real life action hero, a reluctant warrior whose greatest fault – should they deign to mention any – was just being too darn loyal to a guy named George and his buddy Dick. What you might have missed is that Powell is a war criminal in his own right, one who in more than four decades of “public service” helped kill people from Vietnam to Panama to Iraq who never posed a threat to America. But don't just take some anti-war activists' word for it: Powell will proudly tell you as much, so long as he can make a buck from doing it in a book. 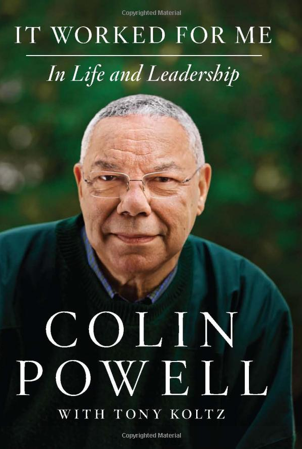 Powell's latest $27.99 account of his legendary life is billed as a “powerful portrait of a leader who is reflective, self-effacing, and grateful for the contributions of everyone he works with.” But the title, It Worked for Me: In Life and Leadership, could very well refer to Powell's own careerist ambitions: saying and doing whatever served the interests of power – as a young officer in Vietnam, as Chairman of the Joint Chiefs of Staff during the illegal invasion of Panama, as Secretary of State under George W. Bush  – has worked out tremendously well for the man, if not so much for those unfortunate enough to be on the receiving end of his public service.

Though billed as a self-effacing, humble leader prepared to admit mistakes, the real Colin Powell is not the one advertised by the P.R. department at HarperCollins. His book makes that clear enough when he discusses his now infamous 2003 presentation before the United Nations on Iraq's alleged stockpiling of weapons of mass destruction. Nearly every line in that speech has since proven to be false – indeed, much of his presentation was known to be false at the time – but you won't find Powell owning up to that.

“There is nothing worse than a leader believing he has accurate information when folks who know he doesn't don't tell him that he doesn't,” Powell writes. “I found myself in trouble on more than one occasion because people kept silent when they should have spoken up. My infamous speech at the U.N. in 2003 about Iraqi WMD programs was not based on facts, though I thought it was.”

In other words, according to Powell, the fact that he lied to the American public as well as the international community on the eve of a disastrous war is not his fault – heavens no – but the fault of his anonymous underlings, the allegedly timid State Department staffers who lacked the courage to speak truth to their courageous boss. Like much of Powell's anecdotes, it's a tidy little story about leadership that's about as truthful as his U.N. speech.

The reality is Powell, like most powerful men in Washington, is a well-documented liar. In fact, those State Department employees Powell blames for his repeating thinly sourced lies before the international community did in fact speak up. Powell just ignored them since what they had to say wasn't convenient to the task at hand: selling an unjust war against a third-rate military power.

As writer Jonathan Schwarz notes, State Department staff actually went through all the claims Powell was to make in his U.N. speech – and they found most of them wanting. But Powell ignored them, boasting that “every statement I make today is backed up by sources, solid sources. These are not assertions. What we're giving you are facts and conclusions based on solid intelligence.”

Let's look at a few of those definitely-not-just-assertions. In an effort to dismiss the value of the U.N. weapons inspectors who were on the ground – and not finding anything – Powell declared that the Iraqis had in fact replaced actual scientists in at least one facility with “Iraqi intelligence agents who were to deceive inspectors about the work that was being done there.” However, in a memo prepared by the State Department's Bureau of Intelligence and Research (INR), that assertion was characterized as “weak” and “not credible.”

But that didn't stop Honest Powell, who went on to make what INR termed a “[h]ighly questionable” claim about the Iraqi government placing its WMD experts “under house arrest . . .  at one of Saddam Hussein's guest houses.” Likewise, veteran journalist Bob Woodward noted in his book Plan of Attack, that Powell took a transcript of a benign conversation between Iraqi soldiers talking about complying with U.N. weapons inspectors and portrayed it “in the most negative light” possible” as an effort to deceive the inspectors, even adding dialogue that wasn't in the original.

But in terms of Powell's own credibility, the most damning part of his U.N. presentation came when he cited documents smuggled out of Iraq by the Saddam Hussein's son-in-law as evidence of ongoing Iraqi perfidy. Powell insisted that Iraq only came clean about its possession of “the deadly nerve agent, VX,” after “inspectors came across documentation as a result of the defection of Hussein Kamal.” What he left out: that Kamal was categorical that all WMDs Iraq may have ever had in the past were destroyed well before the 2003 invasion. “All weapons,” Kamal told inspectors, “biological, chemical, missile, nuclear, were destroyed.” Asked about this in 2006 by journalist Sam Husseini, Powell claimed ignorance and angrily shut the door to his chauffeured vehicle. He has never taken responsibility for his own role in a war that killed well over 115,000 Iraqis and more than 4,400 U.S. soldiers.

When it comes to admitting his own role in war crimes, though, Powell wasn't always so tight-lipped. In an earlier book, My American Journey, Powell was upfront about the collective punishment he inflicted against the people of Vietnam when he led a contingent of South Vietnamese soldiers in an attack on a village full of noncombatants. “The people had fled at our approach, except for an old woman too feeble to move,” he wrote. “We burned down the thatched huts, starting the blaze with Ronson and Zippo cigarette lighters.” That's because “Ho Chi Minh had said the people were like the sea in which his guerrillas swam,” Powell explained. “We tried to solve the problem by making the whole sea uninhabitable.”

If Powell's sorry about violating the Geneva Conventions and killing innocent people, he's never said so. But he has tried to explain his thinking. “I had been conditioned to believe in the wisdom of my superiors, and to obey,” Powell wrote. “I had no qualms about what we were doing.”

Blinding obeying authority – always for personal gain – has been a hallmark of Powell’s career. As the top deputy to Secretary of Defense Caspar Weinberger during the Reagan administration, Powell was a party to the transfer of thousands of missiles to Iran as part of an illegal arms-for-hostages swap, with proceeds from the sales used in defiance of Congress and the World Court in support of the right-wing Contra insurgency in Nicaragua, later known as the Iran-Contra scandal. And as Chairman of the Joint Chiefs of Staff under the first George Bush, Powell led a brutal invasion of Panama in which hundreds of civilians died, an illegal act that was widely condemned by Latin American governments.

Powell’s career culminated with the illegal and disastrous invasion of Iraq. Rather than apologize to the victims of that war, however, he has decided to cash in, hawking his latest volume of apologia at a Costco or Sam's Club near you. Since President Barack Obama had decided to let Bush administration war criminals go free – a “look forward, not backward” privilege allowed powerful men in Washington but denied America's 2.3 million mostly non-violent prisoners – it's up to us to remind Powell that while his subservience to deadly state power may have worked for him, it didn't work out so well for the hundreds of thousands of victims that lay in his wake. And not all of us are willing to forget.

Medea Benjamin is cofounder of CODEPINK: Women for Peace and Global Exchange. She is author of the new book Drone Warfare: Killing by Remote Control.

Charles Davis is a writer who has covered politics for public radio and outlets including Al Jazeera and Inter Press Service. More of his work may be found on his website.