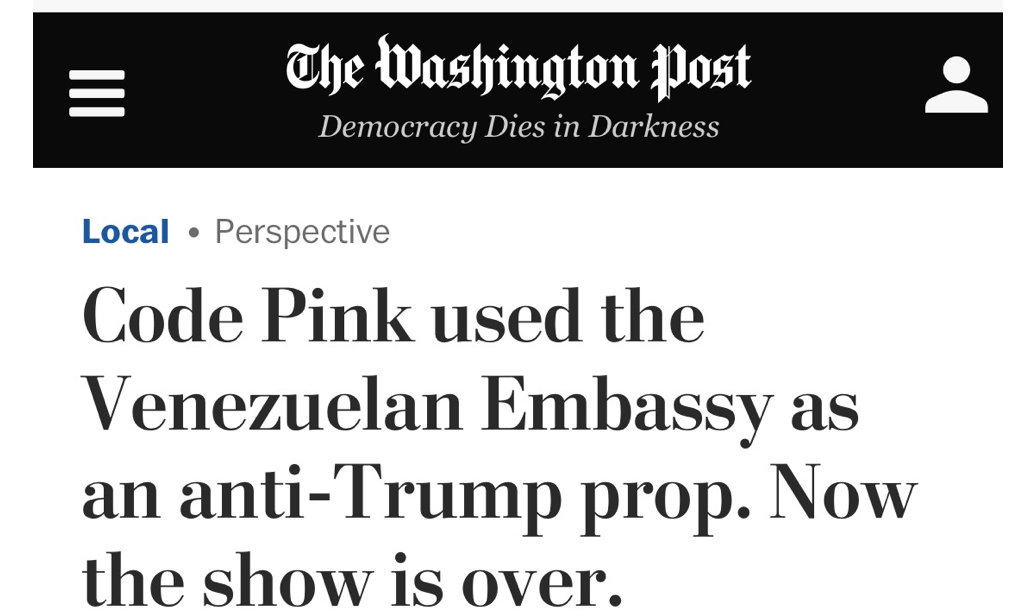 Your article about the Venezuela embassy was very disappointing, for the overall message, the tone, and for some specific items. The occupation of the embassy was designed to protect international law and to prevent the possibility of a tit-for-tat event by Venezuela that could lead to war. You miss the entire point—it had nothing to do with antipathy towards Trump per se.
A few examples of particularly irritating items in your article:

You may not like the theatrics of Code Pink, but to use such a snarky tone is to ignore the serious issues that they were bringing up and is playing into the hands of the extreme right in the U.S. that wants to take over Venezuela. By the way, to assume that the particular Venezuelans who have emigrated to the U.S. and were counter-protesting are representative of the entire country is clearly ridiculous.

I am saddened that you have written such an unbalanced article, one that will play into the hands of people like John Bolton who are itching for war. Code Pink and the other protesters had a legal right to be in the embassy, as they were requested to stay by the legitimate owners, and the U.S. has no legal right to give the embassy to someone else. That would be a dangerous situation for all American diplomats, in all countries—because if the U.S. can do that, why can’t anyone else? Do you not believe in international law?

You are usually better than this.