CODEPINK Statement: Victory! No New Funds for the Pentagon 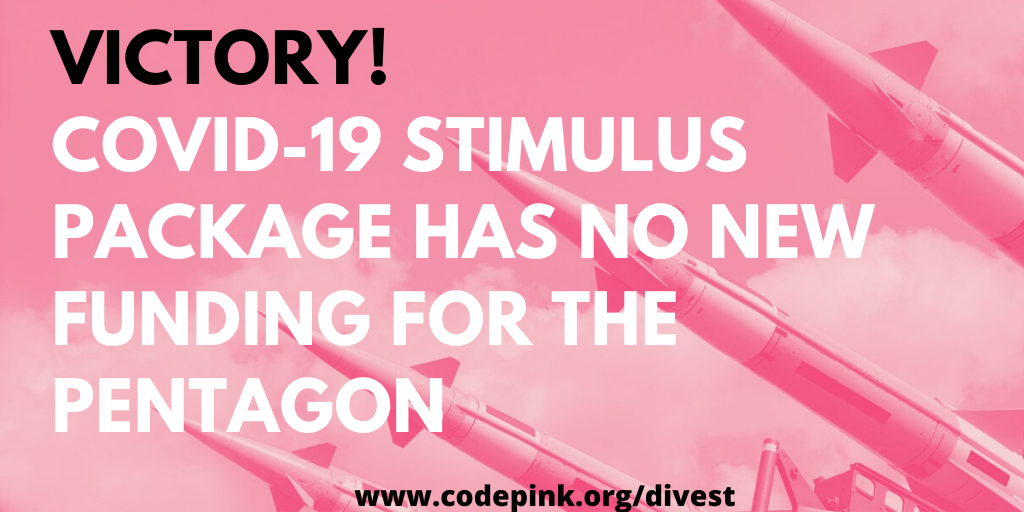 Three weeks ago, CODEPINK joined over 60 other organizations in a letter demanding that Congress not provide any additional funding to the Pentagon in future COVID-19 stimulus packages. We also joined thousands across the country on May Day to urge Congress to bailout people, NOT the Pentagon.

We are excited to announce that the bill introduced in the House today, titled The Heroes Act, includes no new funds for the Pentagon!

This is an incredible victory for the anti-war movement. The Pentagon previously received an additional $10.5 billion in the original COVID-19 stimulus package on top of their annual $740 billion annual budget. When undersecretary of defense Ellen Lord told a press conference three weeks ago that they anticipated requesting “billions and billions” in more Pentagon funding, largely for private weapons manufacturers, we knew we had to stop this request in its tracks.

The swift action of our coalition partners and grassroots activists around the country was key to securing this victory. We’ve proven that when people come together, we can deny the Pentagon additional funding.

Our victory today is exciting, but we must remain vigilant. Grassroots activists and coalition partners can still join our call to bailout people, not the Pentagon in any future COVID-19 stimulus packages.

COVID-19 may be the virus, but the war economy is the disease. We've already seen calls for cuts to social spending in response to COVID-19 stimulus packages, so it will be more important now than ever for us to demand cuts to the Pentagon budget, not social programs.

To learn more about CODEPINK's Divest from the War Machine campaign, visit our website at www.codepink.org/divest or email divest@codepink.org