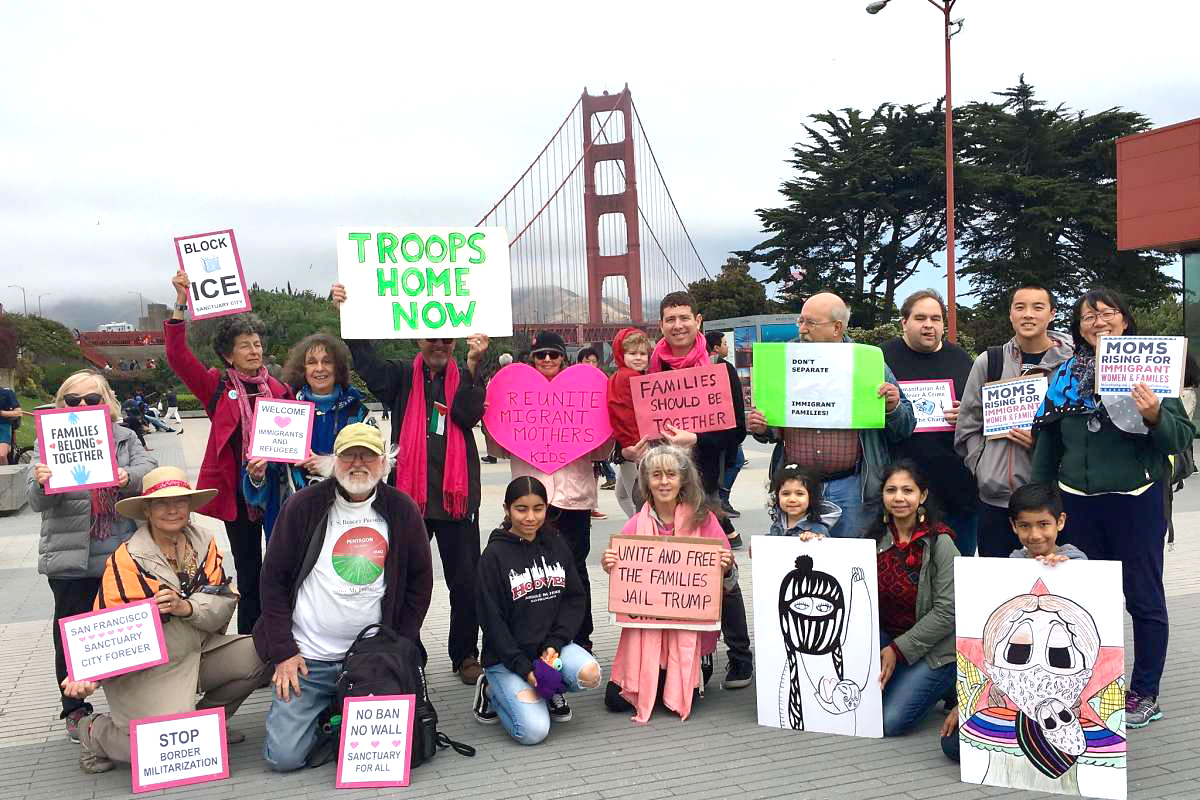 WE STAND WITH IMMIGRANT MOTHERS!

Another beautiful Mother’s Day Walk on our Bridge.

This year our focus was to demand justice for immigrant mothers and their families.  A SF Chronicle Reporter, Shwanika Narayan, showed up and interviewed many participants, and this excellent article was published both online and in the printed paper on Monday.

Many brought their children, and lots of great messaging in support of immigrant mother’s and their families.  One mother, Tania Shul, brought her 3 children, and 2 beautiful illustrations, made by her older children, of Muslim mothers rising.  (see photo). Mona Lisa, dressed up as the Statue of Liberty and brought her two young children, and Laura Zweig brought her son and grandson.

Some of the  messaging included:

Families Should be Together

Most were allowed entry onto the bridge, except Toby Blome was stopped by bridge police officers as she tried to enter with her large flowered peace wreath.  It was unclear at first why on this Mother’s Day the wreath was not going to be allowed onto the bridge, since it had been brought onto the bridge dozens of times before.  Ultimately one of the officers took out a measuring tape and said the stick, which was less than 4 ft., had to be cut down to the maximum allowed, 3 ft by regulations.  He eventually pulled out a saw and measuring tape, and offered to cut the pole down to the correct size. Ultimately the peace wreath joined the march!….about 10 inches shorter!

As usual, we got an extraordinary amount of horns honking on the bridge in support of peace & justice.

After the march we held a short rally on the SF side, while holding signs and our classic Mother’s Day banner:

“We Shall Not Raise Our Children to Kill the Children of Other Mothers.”

You can read the full length modern day proclamation here.

We also passed out flyers of Rivera’s passionate proclamation to passersby on the bridge.

It was a great way to fulfil the purpose of the original call for "Mother’s Day," to unite women against war.

A student reporter with the San Francisco State University paper interviewed us for an article as well.

Big thanks to all who were able to come!