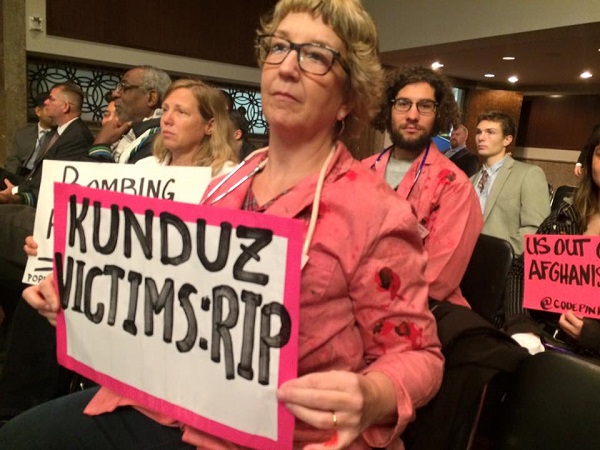 Systematically and with no indecision:

Incinerating patients in their beds

So CODEPINK protests in bloody gowns this dastardly deed

And Dr. Margaret Flowers is locked up we see

And Obama offers (after four versions) a disingenuous apology

For this “mistaken” use of our lethal technology.

No, this was no mistake, as the president owns

As the coordinates were clearly known

And the hospital had notified NATO during the half hour attack,

But nevertheless the planes kept coming back

And destroys evidence of this egregious crime.

As a physician I cringe at this terrible insanity

At this obvious crime against humanity

Hospitals are places of refuge and of healing

Which is why their targeting is revealing

Of immorality and barbarism beyond belief

And why their destruction causes such grief.

And why their targeting is considered a sickening war crime

In our --and every other time

And meant to be protected places of safety.

But we have been destroying infrastructure for years

In our Afghanistan and Iraqi wars

But in the last Israeli Gaza attack fourteen hospitals were

Destroyed—as if they were inconsequential toys

So CodePink sends a message strong

That this is an atrocity and is horribly wrong.

And reminds us of what Martin Luther King had to say

And contrary to the myth our goodness in the extreme

The world is most fearful of the wicked American killing machine.

No there is a sickness here that goes to the core

Of what we are and what we stand for

It is tragic to reflect on what our system has become:

For in act of destruction it is second to none.