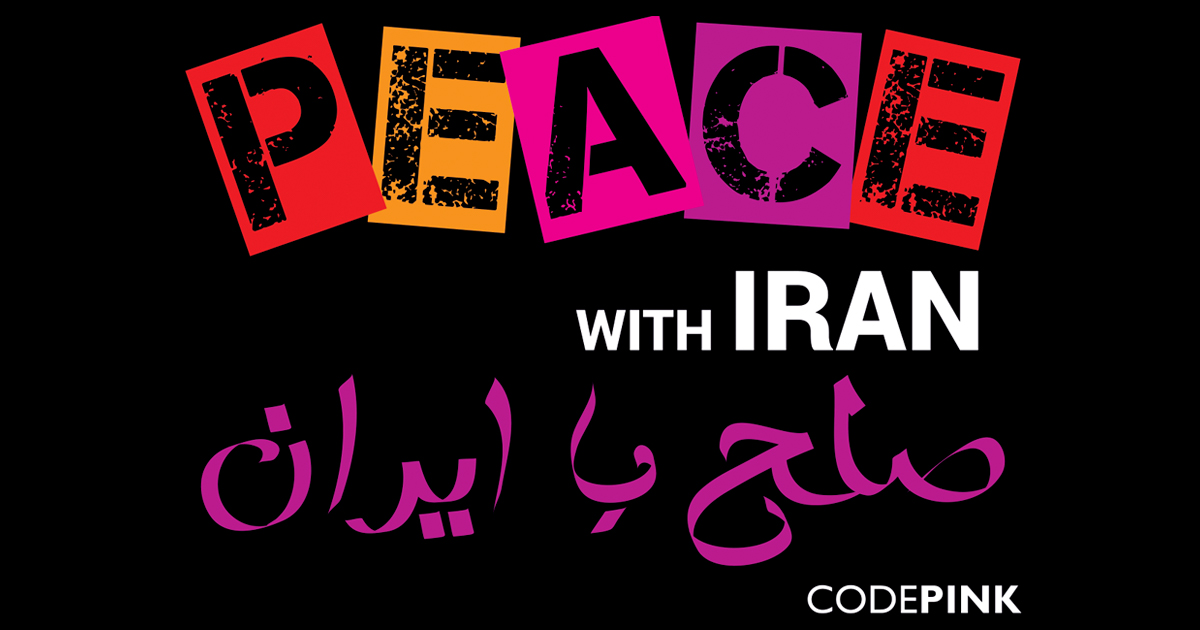 Hi, my name is Megan, and I’m an intern in the CODEPINK LA office. This post is an update about a recent action our LA office took to support our No War with Iran campaign.

The Trump administration, along with many media outlets, have been using rhetoric that antagonize relations between the US and Iran, and we can see warmongers in our government ramping up to military action. War hawks in the administration like Trump and John Bolton have been making inflammatory statements exaggerating Iran’s aggression toward the U.S., and several weeks ago, we were moments away from war before Trump decided at the last minute to hold off. This is hardly positive news, however, given that the media and government are putting out statements every day that Iran is trying to provoke violence.

The LA office decided to pay visits to local representatives that have not signed on to H.R. 2354 - the Prevention of Unconstitutional War with Iran Act - and ask them why not. H.R. 2354 states that Congress will prohibit funds for active military actions to be used against Iran unless Congress authorizes it (with the exception of response to imminent threat).

We were surprised to find out that Ted Lieu, the House Representative from the 33rd district, who represents a large part of Los Angeles, had not signed on the bill. The Congressman had been my family’s representative for years, and his district constituents consist of perhaps the largest Perisan community outside of Iran. Since he was someone we thought we could convince to support us, we decided to talk with the people in his office.

I was enthusiastic about this project because our Iran campaign particularly resonates with me. My own family came to America on political asylum after the Iranian Revolution in 1979, and have been living in what is now Ted Lieu’s district ever since. I am someone who grew up in a family that was  forced to permanently leave behind their possessions, resources, culture, and community. My family narrowly escaped with their lives from a coup that was orchestrated by the U.S. government.. I’ve heard the pain in my grandmother’s voice when she described what her life used to be, and how her family has been unable to return home for the last 40 years, and as a result of this, I have always been aware that violence is just around the corner, and has a much stronger impact than we tend to discuss. I have also always been horrified at how willingly America is willing to lay down the lives of its citizens in order to further governmental agendas. As someone who lives down the street from a military cemetery, I drive every day past a vast and seemingly endless lawn of gravestones, reminding me of all the people who have died needlessly in the name of imperialism, nationalism, and corporate profit. However, the most disturbing (part) of this daily drive is not the intimidating number of gravestones that lay before me; it is the huge swaths of land still empty, waiting to be occupied. I didn’t want to stand idly by when there was a potential of millions of lives being lost or another family facing a similar situation to my own.

Knowing the urgency of this situation, we decided to go directly to the Congressman’s office and wait for a meeting. After about half an hour, we were able to speak with Ted Lieu’s staff member, and we shared both my family’s story and the reasons we believed war with Iran would be detrimental.

We talked about US imperialism and South America, and how it has caused the surge in forced migration. We talked about other military interventions in the Middle East, particularly Iraq, and how that war has not only led to instability and demolition of the country, but gave rise to the terrorist groups like ISIS that we are so worried about today. We talked about how the Iranian Revolution of 1979 that forced so many Persians, including my family, to flee and put fundamentalist religious leaders in charge was caused by an American coup and that to step into Iran again would be to repeat history with the same negative outcome.  For these reasons, we felt that financially inhibiting the administration from military intervention could dramatically decrease the risk of America further destabilizing the Middle East.

His staff member agreed with everything we said, and assured us that he would bring the issue up to the Congressman, who he thought would most likely agree with our position.

We got an email from Congressman Lieu’s office saying that not only did he decide to follow our advice to co-sponsor, but the House amendment “passed on a bipartisan basis by a vote of 251 to 170.” To see a concrete result from our own actions, despite how small it is, was an amazing breath of fresh air in the overwhelming sea of helplessness we find ourselves in every day. It was a great lesson for me that sometimes the small actions can fulfill a more meaningful role.