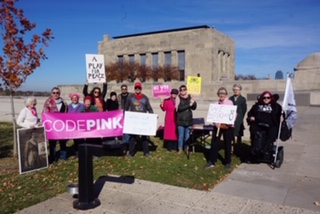 In honor of Armistice Day, or as most people know it, Veterans Day, CODEPINK Kansas City sponsored a play for peace at the Liberty Memorial in Penn Valley Park. The adjacent World War I Museum is a powerful testament to the folly and devastation of war, which is why CODEPINK KC held its first public event there. Our gathering featured a short, original play, entitled Crosshairs (Give Me Direction). The play was written by local playwright Emmeline McCabe and produced by Rising Tide Productions.

Margot Patterson gave opening remarks and the powerful short play was followed by remarks from veterans Barbara LeClerc (a CODEPINK member) and Sara Campbell, a local member of Veterans for Peace. Members of CODEPINK KC carried signs focusing on current wars in which the United States is involved and the human and economic costs of U.S. militarism.  We distributed small “poppies for peace” and CODEPINK KC member Amrita Burdick circulated among those gathered with a photo poster of her grandmother, who married a soldier of World War I, asking how the war to end all wars had played out in their families.

CODEPINK Kansas City was formed eight months ago shortly after Medea Benjamin came to the area to speak and inspired some members of the audience to begin a local chapter. Benjamin is one of the founders of CODEPINK, a women’s grassroots peace organization that started in Washington D.C. in 2002 as an effort to prevent the impending U.S. war on Iraq.

We hope to continue activism with CODEPINK actions and issues in the Kansas City area. If you are interested in getting involved, please email Margot.