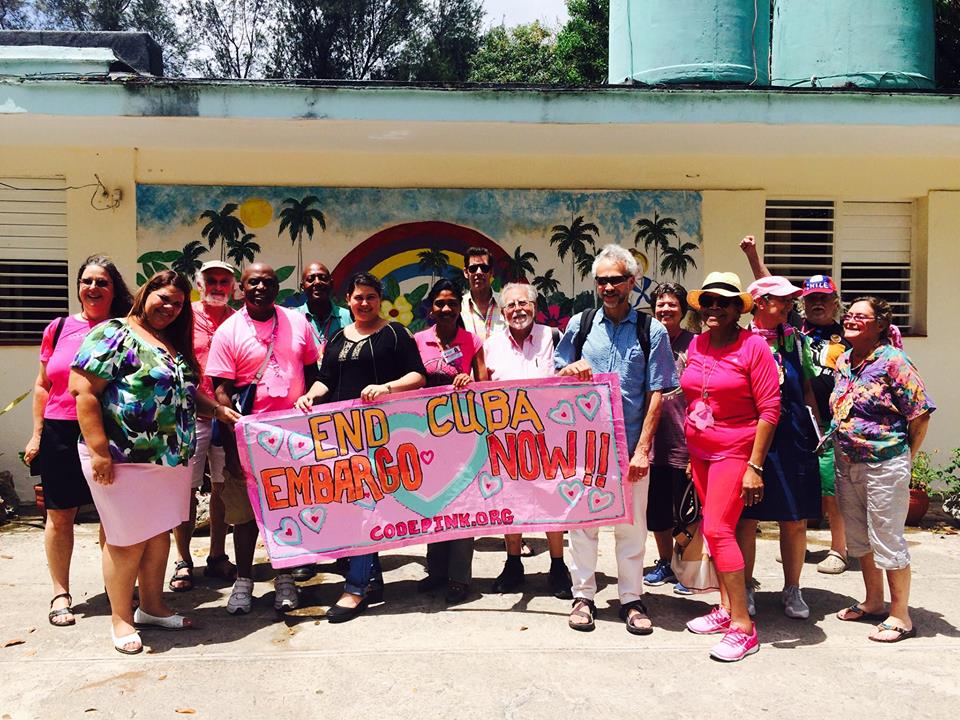 CODEPINK denounces the Trump administration’s new travel restrictions that will severely limit the ability of Americans to travel to Cuba. The restrictions, announced on June 4, prohibit group educational trips to Cuba, known as “people-to-people” travel, as well as passenger vessels, recreational vessels, and private aircraft. CODEPINK, which has been involved in people-to-people travel to Cuba for the past 15 years, plans to contest this ban, which violates the rights of Americans to travel, and plans to continue organizing trips to Cuba under other categories. With the Trump administration rolling back the improvements in U.S.-Cuba relations achieved under the Obama administration, we believe it is more important than ever to foster ties of friendship with the Cuban people.

While the Trump administration wants to punish the Cuban government, these new travel restrictions will be particularly harmful to Cuba’s private entrepreneurs who have poured their lives’ savings into restaurants and home-based lodgings catering to American travelers.

The restrictions also violate Americans’ freedom to travel. The federal government, claiming to represent a global model of democracy, is the only country that restricts travel to Cuba. Canadians have always traveled freely to the island, as have people from Latin America, Europe and all over the globe. The U.S. also allows Americans to travel to the world’s most repressive countries—from North Korea to Myanmar to Saudi Arabia—but unfairly singles out Cuba.

Denying Americans the right to travel to Cuba violates the freedoms of Americans and runs contrary to the will of the American people. Poll after poll shows that the majority of Americans support the normalization of US-Cuba relations.

These travel restrictions come on the heels of another Trump administration measure to strangle the Cuban economy, which is the implementation of Title III of the 1996 Helms-Burton act. This allows Cuban Americans to sue foreign companies in Cuba for property taken from them at the time of the revolution—60 years ago! It is a punitive measure designed to make foreign companies afraid of investing in Cuba. What hypocrisy that the US government encourages investment in the most repressive countries in the world, such as Saudi Arabia and Egypt, but tries to prohibit foreign investment in Cuba.

Treasury Secretary Steven Mnuchin justified the measures against Cuba by alleging that “Cuba continues to play a destabilizing role in the Western Hemisphere, providing a communist foothold in the region and propping up U.S. adversaries in places like Venezuela and Nicaragua by fomenting instability, undermining the rule of law, and suppressing democratic processes.” Yet the U.S. aligns itself with the most repressive governments throughout Latin American, from Honduras to Brazil, and denies refuge to immigrants fleeing from Latin American repression.

The Trump administration, particularly John Bolton (who has called Cuba one of the “troika of tyranny” along with Venezuela and Nicaragua), wants to overturn governments that challenge U.S. imperial control in the region. Bolton has openly stated that the 1823 Monroe Doctrine is alive and well, conveying that the United States will dictate the terms of governance in the countries of the Western Hemisphere, by military force if necessary. CODEPINK rejects this imperial concept that the United States has the right to interfere in the internal affairs of other nations and calls for respect for national sovereignty.

We also recognize that these punitive measures against Cuba cater to partisan politics. They are designed to appease a tiny sector of the U.S. population—conservative Cuban-Americans—in a craven effort to guarantee their Florida votes in the upcoming elections. The Cuban people, and the rights of Americans, should not be held hostage to brazen partisan politics.

CODEPINK will be taking a delegation to Cuba in July to show our friendship with the Cuban people. For more information, contact [email protected].