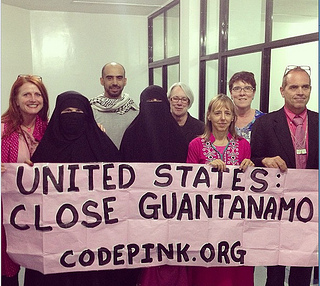 Medea arrived at 2 a.m and joined us on the beautiful rooftop of Burj al Salam hotel.  Over breakfast, we contemplated our itinerary, at every hour, at opposite sides of Sana’a, we were scheduled for a meeting. We decided we had to split up.  Bob Naiman of Just Foreign Policy, Terry Rockefeller of 9/11 families for Peaceful Tomorrows and I chose to go to the US Ambassador meeting while the other three, Medea Benjamin and Tighe Barry of CODEPINK and Pam Bailey, an independent journalist, went off to meet with Prime Minister Basindwa and Human Rights Minister Hooria Mashhour.  The other team were greeted by Yemen media when they arrived at the Prime Minister’s house, they were excited to see U.S. Peace Activists . 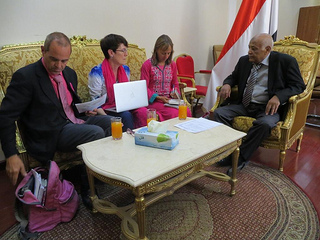 We sat down on the couches outside the offices and near a table set for 40 guests, waiting to be called in. Ambassador Gerald M. Feierstein’s delightful Information Officer told us we have an hour with the Ambassador because at one o’clock he was hosting a luncheon. It was noon.

The Ambassador comes in, greets us warmly and we launch into introductions. Bob tells Ambassador Feierstein he is key to the issues we had come to Yemen about. The Ambassador responds with “I am not key”. But since we’ve arrived, we’ve heard from numerous people that he is the puppet pulling all the strings. They’ve even nicknamed him "Sheikh Feierstein” for his strong interference and influence in the decision-making process, but apparently “Sheikh Feierstein” didn’t think so.  It reminded me of my visit to the White House with the 300,000 signatures that demanded Obama to send the prisoners cleared for release from Guantanamo back home.  They all play that same tune of “who me, I have no power around here.”

We open the topic of Guantanamo and he tells us that McCain had just visited a few weeks ago showing his support for closing Guantanamo and releasing the prisoners. And that the Saudi’s had just been in town as well to discuss the “model” system they have created for reintegrating Guantanamo prisoners and it sounded like funding for the reintegration program in Yemen was underway. He said “it was the Saudi’s program that would give the US citizen’s confidence the prisoners wouldn’t go back to doing what they were before.”  Forgetting, I assume, that they were cleared for release for no wrongdoing since 2007.  But his monologue was going at a clip, and I didn’t want to interrupt.

I perked up when he said, “Solution to violent extremism is not drones, they will not end the threat.  The solution to violent extremism is economic and social development.”   WOW.  Why don’t their behaviors match what they know to be true?  He continues, “It is far better to have Yemeni’s take on the challenges than the U.S..”  But what he says is not matching his actions.

When we started getting into the discussion of drone strikes, our information just did not match and it reminded me of the layers of blindness and disconnect that happen to people in power, especially one like the Ambassador who lives behind walls.  He didn’t believe that there were any drone strike mistakes in Yemen and he refused to acknowledge something that everyone knows to be true, that children had been killed and that drone strikes contribute to the growing and strengthening of AQAP.  What the Ambassador was claiming, differed significantly from what we heard the day before by those who are impacted directly by it and who work on these issues.  When I mentioned UNICEF has even set up a fund to support and provide drone survivors with medical treatment in Jordan,  he looked shocked.

Ambassador Fierstein  goes on to say, casualties caused by U.S. drone strikes have been exaggerated by the US media, but of course fails to mention the Al-Qaeda exaggeration in Yemen.  Yemen Polling Center, an independent think-tank in Sana’a, recently published their research “Perceptions of the Security Sector”, and they found that on the list of the 10 greatest security threats, AQAP wasn’t one. But Fierstein and the Obama administration refuse to listen to the Yemeni people and are instead, deciding for the Yemeni people what their biggest threat is. Using that to justify the lethal program and further militarization. 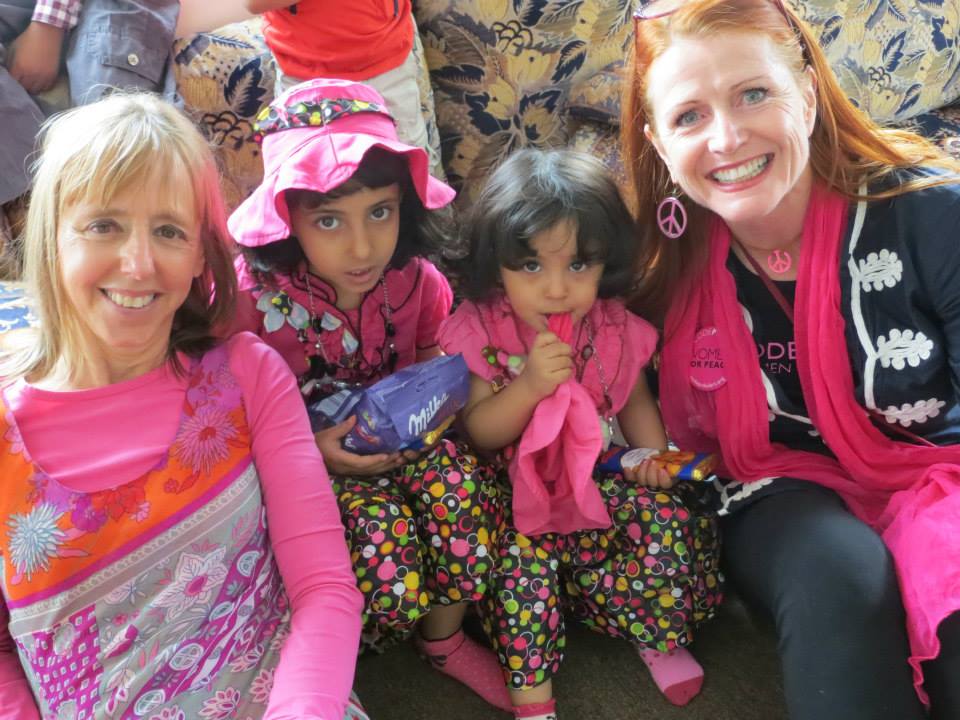 The meeting continued for over two hours and the sounds of the attendees coming for lunch began to grow louder. The guests were waiting patiently to be seated.  As we wrapped up our meeting, we secured three promises with the Ambassador.  An answer about the policy around drones strikes in Yemen, so Bob can report about it.  A meeting with the family members of Guantanamo prisoners, and a meeting with those working on reintegration and rehabilitation for members of Al-Qaeda.  Right before leaving, I asked one quick question to the Ambassador, “What were your thoughts on Dirty Wars?”, I asked.  He looked back, blank faced and then over to his information officer, who says. “Jeremy Scahill”.. “Ah, I won’t watch anything Jeremy did, he is too ideological.” responds the Ambassador.  As they begin to show us out the door,  I suggested to the Ambassador that he consider watching it, since Yemen has a big role in the film.  His information officer agrees to do a screening, if I get him a DVD.

We left pleased with what we learned and what was promised to 5 hours of testimonies by the Guantanamo families that were heartbreaking. You can follow a bit of it on my twitter @MsJodieEvans.  At the end of the testimonies the families agreed to meet with the U.S. Ambassador next week and the rest of the supporters would be outside the U.S. Embassy in a vigil.  Already human rights and activist groups are signing on to join us.  I end the day shocked that it took a few people coming from the US to connect these family members who have been suffering for 12 years to the US representative in Yemen, they have never been heard by a US Ambassador.  I go to bed hopeful that with a collective effort, we can make this happen.  They were so happy to have told their stories to us today, imagine what it will do to be finally heard by a US official.  Their hearts were pouring out with grief.

One of the most heartbreaking things I learned is that they are outcasts here in Yemen because they have a relative in GITMO.  There is this belief that if the prisoners are languishing in Guantanamo Prison, they must be a terrorist. With so much stigma attached to Guantanamo, relatives in Yemen are deeply marginalized. The young girl can’t go to school, sisters have been divorced by their husbands, parents have died from heartbreak, lives have been totally broken.  It was very hard to sit through the stories.  But in the end, the joy of being a listener gave them and us hope.

Tomorrow we meet with more families.  We are filming their stories to create a 30 minute show for LinkTV. Oh dear 1am.

p.s. because there is sketchy electricity this is getting posted a day late, but I add a cause for celebration.  The Ambassador’s office HAS committed to the meeting before Ramadan which starts Tuesday the 9th of July.  Yippeeeee!