Call for a Christmas Truce in Ukraine! 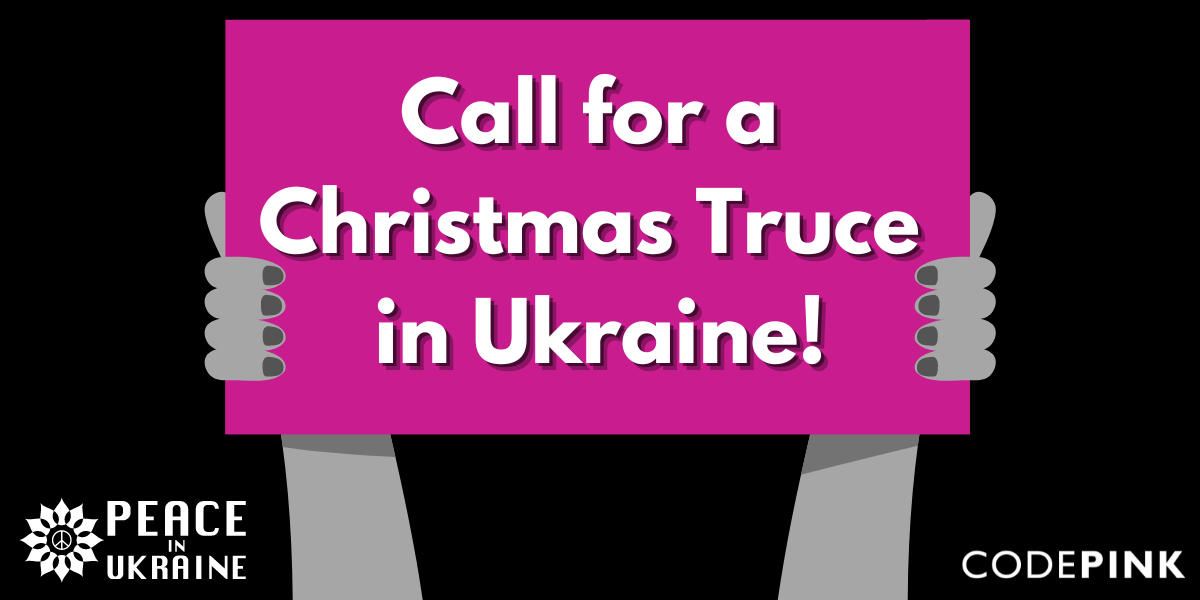 In 1914, amid one of the most violent conflicts of human history, a remarkable moment of peace and humanity occurred during World War I when French, German and British soldiers crossed trenches on Christmas Eve. For several days, enemy soldiers put down their guns and mingled to become friends. There were joint burial ceremonies and prisoner swaps. They played football, ate meals together and even sang Christmas carols—creating one of the most memorable images of peace in the midst of a horrific war.

The Christmas Truce of 1914 was a symbol of hope and courage, when the people of warring countries organized an armistice on their own authority and joined in spontaneous reconciliation and fraternization.

In this same spirit, we ask you to join us in urging President Biden, Secretary of State Antony Blinken and congressional representatives to support the International Peace Bureau’s call for a Christmas Truce in Ukraine. A truce–a moment of  holiday peace–could pave the way for negotiations to reach a lasting security agreement to end the bloodshed once and for all.

Today, as the war in Ukraine rages, we look to this extraordinary 1914 Christmas Truce for inspiration to call for a ceasefire in Ukraine, where the toll of death, destruction and displacement continues to mount—as does the potential for escalation and use of nuclear weapons. The war’s impact is multiplied outside of Ukraine’s borders as skyrocketing prices for wheat, fertilizer and fuel  hammer Europe’s economies and exacerbate the climate crisis, global hunger and poverty.

As people who embrace the sanctity of all life on this planet, we urge President Biden and our representatives in Congress to take a leadership role in bringing the war in Ukraine to an end. We call for a ceasefire and negotiated settlement before the conflict results in a nuclear war that devastates the world’s ecosystems and annihilates all of creation.

The way out of the war in Ukraine will not be through military power–neither side is capable of achieving its goals on the battlefield. The path toward peace in Ukraine requires powers of a different sort: negotiation and imagination. We hope that our leaders will gather the courage and conscience to exercise those powers instead.

During this holiday season, when people send messages of joy and peace,  we believe that peace, reconciliation and compassion can triumph over  the hatred and violence that currently dominate.

A Christmas truce is a much-needed opportunity to redouble our conviction that together, we can overcome the cycle of destruction, suffering and death. It is an opportunity to remind us that we are all human beings and that war is senseless.