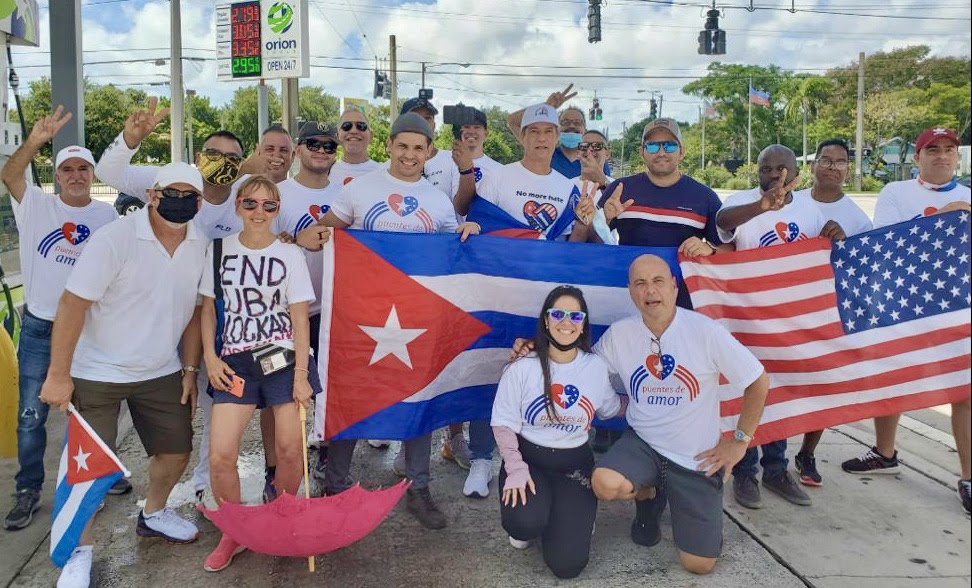 Carlos Lazo getting ready to start his march from Miami to Washington, D.C. Credit: Tighe Barry

Carlos Lazo and a small band of Cuban Americans are on a 1,300-mile pilgrimage from Miami to Washington, D.C., to end the U.S. blockade of Cuba. Despite the blistering summer heat and occasional death threats (including a trucker who tried to run them off the road), the marchers persist. Lazo’s group is called Puentes de Amor, Bridges of Love, and this grueling walkathon is certainly a labor of love.

While right-wing Cubans in Miami call him “comunista,” Lazo has no time for ideology. He is neither for or against the Cuban government; he is for the Cuban people, the Cuban families. And he is disgusted by the cruelty of the U.S. blockade and by politicians who use the Cuban people as a political football--especially during this pandemic.

Lazo portrays Cuba and the U.S. as his parents—Cuba is his mother, the U.S. his father. He sees his job as trying to stop them from fighting and instead to embrace each other. “We try to unite people, whatever their ideology, religion, race or nationality,” Lazo told me. “The important thing is to take down walls that separate us and build bridges between our people.”

Lazo and the marchers set off from Miami on June 27 and will arrive in Washington, D.C., on July 25. All along the journey, they have been meeting with community groups—black farmers, veterans, students—explaining their purpose and their demands. They are calling for a lifting of all restrictions on sending remittances to their families back home; the resumption of flights from the U.S., not only to Havana but to all major Cuban cities (right now U.S. planes can only land in Havana); the reopening of a fully staffed U.S. Embassy and Consulate in Havana instead of the skeletal staff that exists now; a restart to the program of family reunification that Trump suspended in 2017; the granting to U.S. citizens of the right to travel freely to Cuba; and robust economic relations, as well as scientific and cultural exchanges. Despite candidate Biden’s campaign promises to revert to Obama’s openings, the Biden administration insists that its Cuba policy is still “under review.” In practice, it has continued the brutal Trump agenda.

You couldn’t invent a better person than Carlos Lazo—a gregarious high school teacher/veteran who also plays guitar, sings and dances like a Cuban rock star—to lead a movement to change U.S.-Cuba policy. His trajectory reads like a movie script. The son of a cigar maker and a housewife, Lazo grew up in the small fishing village of Jaimanitas, west of Havana, and spent the first 28 years of his life there. After his mother emigrated to the United States, Lazo dreamed of following her. He first tried to leave in 1988 when he and his friend rigged up a makeshift raft. After two days adrift in the ocean, they were picked up by the Cuban Coast Guard. Lazo was thrown in jail, where he spent an entire year for illegally trying to leave the island.

Undeterred, in 1991 he tried again. After four precarious days on a rickety raft with six others, this time they were rescued by the U.S. Coast Guard and allowed to enter the United States.

Lazo spent a few years in Miami working in restaurants, delivering pizzas and driving trucks, but moved to Seattle in 1998 to seek more economic opportunities. There he joined the Washington National Guard and studied nursing. When the U.S. invaded Iraq, he was sent as a combat medic. He participated in the battle of Fallujah and was awarded a bronze star for helping to save lives.

But in 2005, when this decorated veteran was on leave and tried to visit his two sons living in Cuba, he discovered that the Bush administration wouldn’t allow him to go. This was a turning point in his life, when Lazo realized that the U.S. blockade, which has existed in one form or another since the 1960s, was hurting both the Cuban people and Cuban Americans who wanted to visit and help their families back home.

So Lazo began speaking out. In 2007, he testified before the U.S. Senate and met with more than 100 members of Congress. He was featured on CNN and MSNBC and in national newspapers.

When Obama became president and started normalizing relations with Cuba, Lazo thought his political work was over. He got a teaching degree, became a high school Spanish teacher, and threw himself into building a unique cultural exchange program that took his students to Cuba. The “profe,” as he is known, taught his students to sing Cuban love songs and dance salsa, winning the hearts of their Cuban hosts. He called this project the Factory of Dreams.

These glorious exchanges, six in total, came to a crashing halt when Trump entered the White House. Trump tried to please right-wing Cubans in Miami by reversing Obama’s openings and adding 242 additional coercive measures designed to torpedo the Cuban economy.

While the pandemic left a trail of pain and death around the world, Trump insisted on restricting family remittances to Cuba, stopping fuel shipments that supplied electricity to Cuban homes and hospitals, and sabotaging Cuban medical brigades that were helping to save lives around the world. “The planet cried out for solidarity and cooperation,” Lazo fumed, “but Trump responded by trying to suffocate the Cuban people.”

Lazo decided to take action. Despite the raging pandemic in the summer of 2020, he and four family members got on their bikes and rode more than 3,000 miles from Seattle to Washington, D.C., to urge Donald Trump and Congress to lift the blockade. Lazo livestreamed their voyage on Facebook, gaining an enormous following along the way.

Lazo’s cross-country trip inspired a group of Cuban Americans in Miami to begin their own caravan of bicycles and cars on the last Sunday of every month. Starting with just 11 bicycles last July, the Miami caravan has grown to more than a hundred vehicles and bicycles going down Calle Ocho in Little Havana. Carlos teamed up with Miami YouTube personality Jorge Medina (El Proteston) to galvanize hundreds of Cuban Americans. For the older generation of Miami Cubans who, at great personal risk, have been proposing normal relations and opposing the right-wing “haters” of the Cuban government since the 1959 revolution, this infusion of energy is a thrilling development.

Inspired by the success in Miami, there are now monthly caravans taking place in some 30 cities in the United States and scores more throughout the world, including in Cuba itself. Clearly, Lazo’s rejection of hatred and his commitment to building “bridges of love” reflect the sentiments of a growing number of Cuban Americans and their allies.

When the marchers arrive in the nation’s capital, they will be greeted by hundreds of supporters, including Cuban Americans flying all the way from Miami. Lazo plans to stay in Washington to meet with members of Congress and present the Biden administration with a petition signed by more than 25,000 people calling on him to build “bridges of love” between the two countries—just as President Obama started to do when he was in the White House.

Lazo’s pilgrimage shows his understanding that opponents of the blockade in the Cuban community need allies among broader layers of people--the farmers, students, church people, truck drivers, etc.--that he is meeting on the way. He believes the bridges of love go both ways because many groups, besides Cubans, have an interest in ending the blockade. These include farmers who want to sell their crops; tourists eager to enjoy Cuba's nearby beauty, culture, and history; and scientists and public health officials seeking to collaborate with the island's advanced medical system and biotech industries. In his pilgrimage, he wants to give a voice to these allies as well.

The mushrooming of caravans across the country, the increasing number of city council resolutions against the blockade, the recent vote of the Longshore Union to condemn it, the $400,000 raised by groups sound the country to send syringes for Cuba’s COVID vaccinations— all show a growing feeling that it's past time for the Biden administration to re-examine its cynical, electoral calculations in continuing Trump's restrictions on Cuba.

Lazo is not naive. He is under no illusions that his trek to Washington, D.C., will be enough to change Biden’s policies. But his philosophy is both simple and profound: “Everything you do to make the world better helps to make the world better,” he says. And whether it’s a cross-country bike trip or a 1,300-mile trek in the summer heat, Lazo takes these bold actions with so much joy, love and enthusiasm that others can’t help but follow his lead.

Medea Benjamin, co-founder of Global Exchange and CODEPINK: Women for Peace, is the author of the 2018 book, "Inside Iran: The Real History and Politics of the Islamic Republic of Iran." Her previous books include: "Kingdom of the Unjust: Behind the U.S.-Saudi Connection" (2016); "Drone Warfare: Killing by Remote Control" (2013); "Don’t Be Afraid Gringo: A Honduran Woman Speaks from the Heart" (1989), and (with Jodie Evans) "Stop the Next War Now (Inner Ocean Action Guide)" (2005).