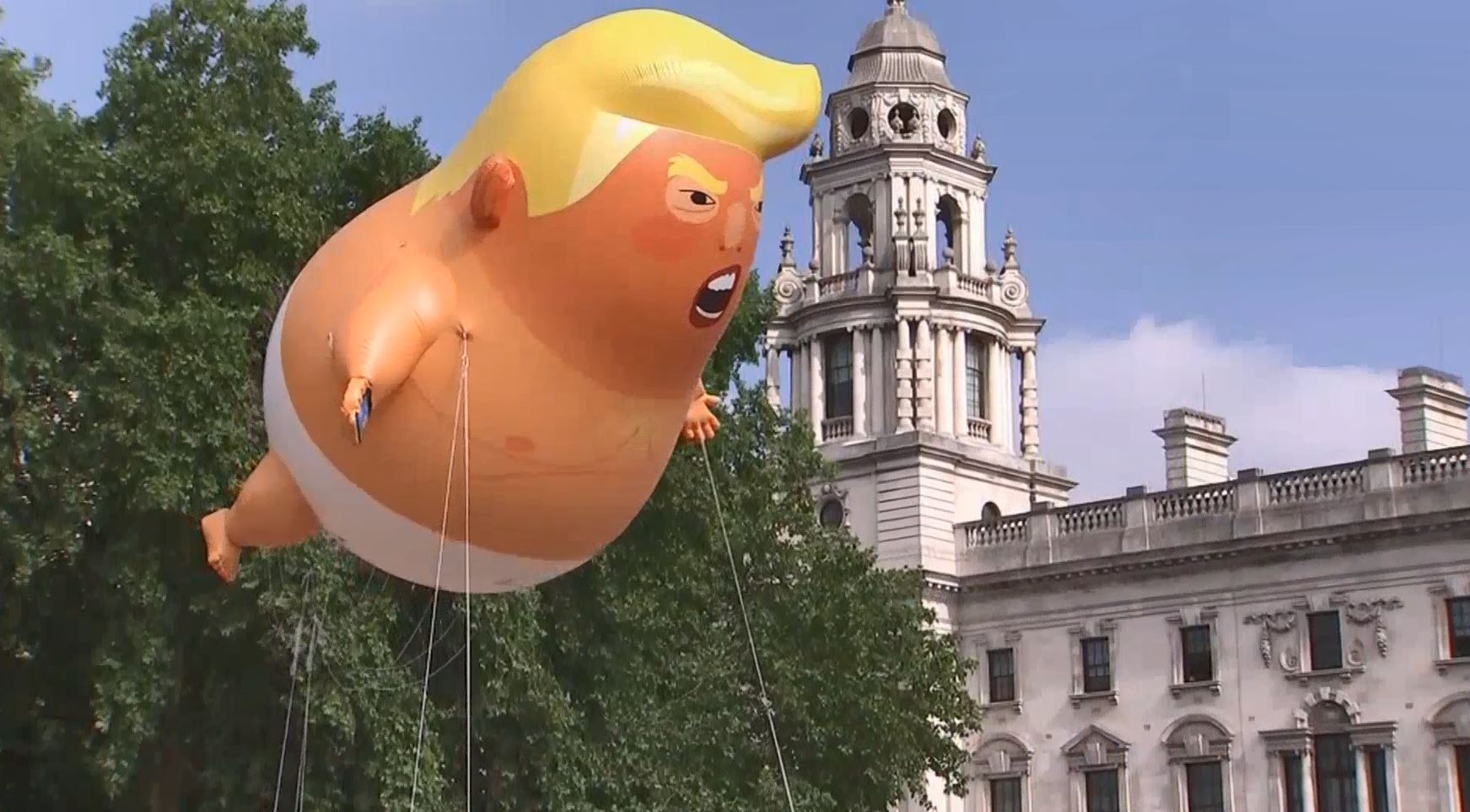 The best thing about Donald Trump’s visit to England and Scotland was the protests—or Carnival of Resistance, as some called them. Their outrageous signs, costumes, and visuals, including the Baby Trump blimp, were in contrast to our oftentimes sedate US demonstrations.  That’s why a GoFundMe has been started to make Baby Trump Blimp the Guest of Honor at the November 10th protest against Trump’s scheduled military parade in Washington DC. The American public would certainly get a lift from an oversized Trump in diapers hovering above Trump’s macho display of guns and missiles.

The carnival atmosphere included drag queens decked out in their finest wigs and gowns, with signs proclaiming “No Closets, No Cages.” A brass band called Trumpets Against Trump delighted the crowds with their brash tunes. A singing group with orange wigs crooned “We Shall Overcomb.” Young women held photos of Trump with sparkles and red lipstick advocating “Less Guns, More Glitter.” Rappers called for radical transformation: “The revolution is coming, I don’t care what you think; the ship looks stable right before it sinks.” 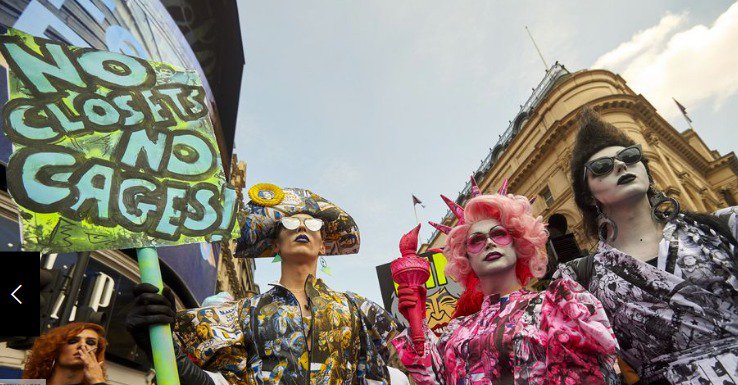 The belle of the ball, however, was Baby Trump—the delightful giant orange blimp of a screaming baby, wearing a diaper and gripping a cell phone for tweeting. The creators of the Baby Trump inflatable, who call themselves “the Babysitters,” got the idea while hanging out in a pub, thinking about how to visualize their opposition to Trump’s xenophobia that is affecting both the United States and Europe. Recalling comedian Jon Stewart’s characterization of Trump as a “man-baby,” they got the idea of making the blimp to target Trump’s fragile ego. “He doesn’t seem to be affected by the moral outrage that comes from his behavior and his policies,” said organizer Matt Bonner. “We realized that you can’t reason with him, but you can ridicule him.” They also thought that in these dark and disturbing times, both in the US and in Europe, humor would be a welcome relief. Their idea struck a chord with the public: a crowd-funding campaign garnered $25,000 to make the big baby fly. 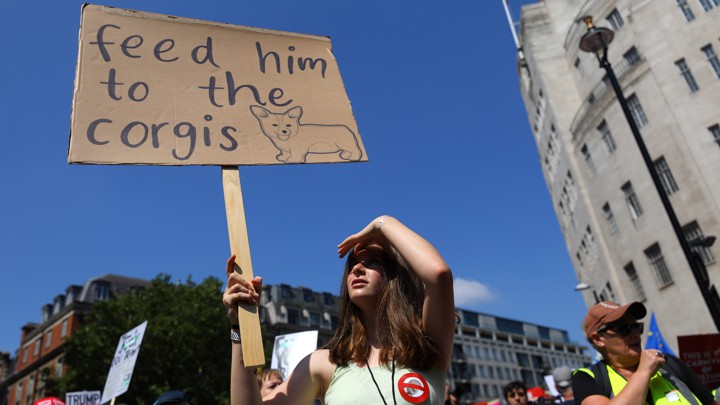 The “Babysitters” did, indeed, nail Trump’s behavior, as he acted like an infantile bully on the visit.  He hurled insults at his host, Prime Minister Theresa May, chastising her for not following his advice on Brexit. He criticized London’s first Muslim mayor, Sadiq Khan, who authorized the Trump blimp on free speech grounds. Trump accused Khan of being soft on terrorism and allowing too many immigrants into London.

In a blatant show of dog whistle racism, Trump insulted not only Brits but all of Europe, saying immigration is "changing the culture" of Europe. Ironically, vintage British culture was on full display at the protests, with signs such as “Teapot Not Despot,” “Hate is not my cup of tea,” or the height of disdain: “He probably doesn’t even like tea.” Some signs used widely recognized colloquialisms, like “Trump can bugger off” and “Too many tweets make a twat.” Others needed translation, like “Feed him to the corgis”, referring to a popular Welch dog originally bred to herd sheep, or “Go Home: Wonsit W*nker”, invoking a masterbuting orange cheese puff.

Trump certainly got the message. The protests led him to avoid the entire downtown of London. “When they put out blimps to make me feel unwelcome, [there was] no reason for me to go to London,” Trump told the Sun newspaper. “I used to love London as a city. I haven’t been there in a long time. But when they make you feel unwelcome, why would I stay there?” But even at the US Ambassador's residence in Regent's Park, where Donald Trump and Melania stayed, protesters showed up with signs like: “Not Even Your Wife Likes You.” And outside his meeting with the Queen, Trump was met by merrymakers proclaiming, “Save our queen from the fascist tangerine.” 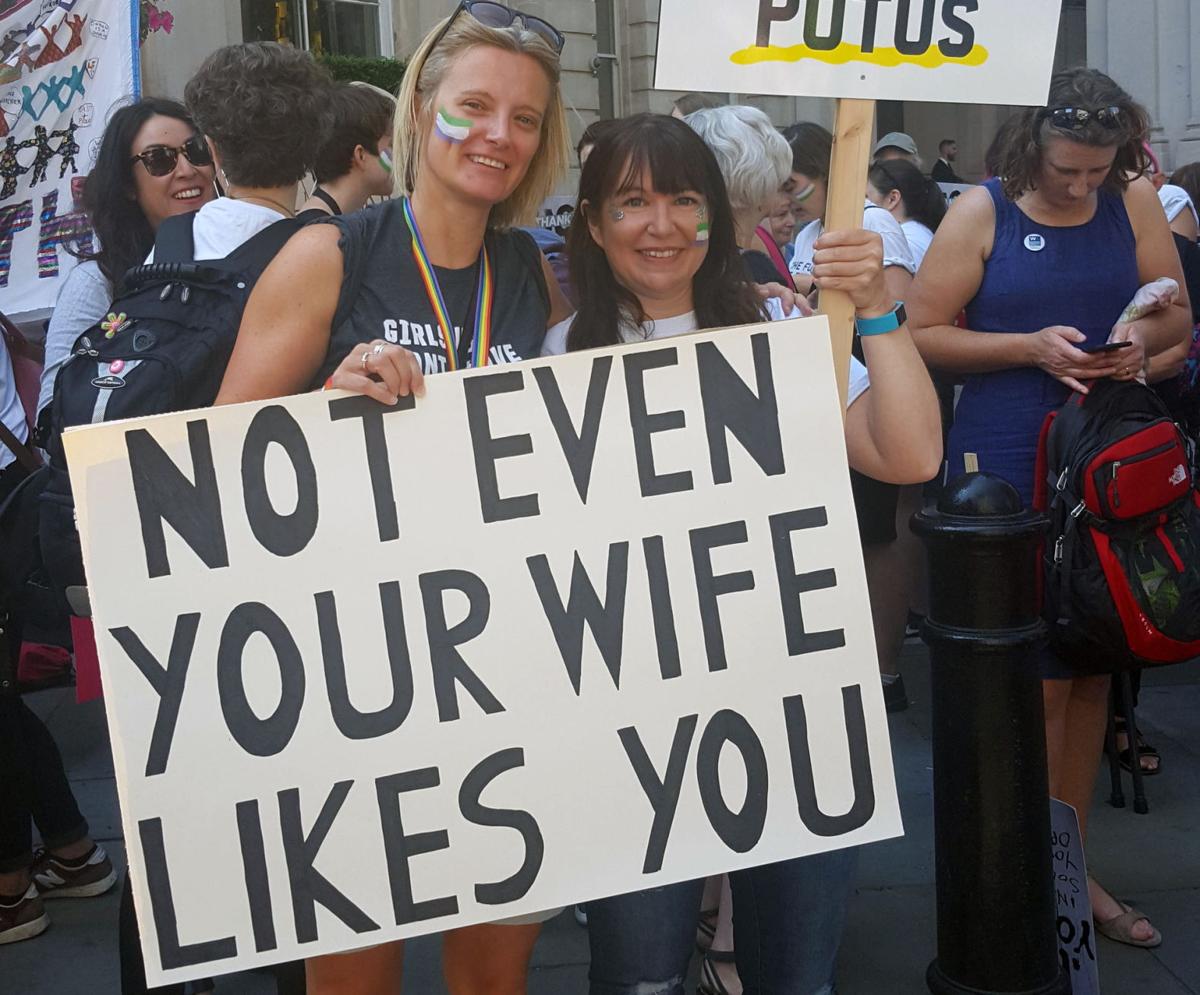 Retreating to his golf resort in Turnberry, Scotland, Trump was still hounded by opponents. A Greenpeace activist was arrested for paragliding over the golf course with a banner reading "Trump: Well Below Par.” Scots gathered at the nearby beach to denounce Trump’s “special relationship” with Scotland because his mother grew up there. One sign opposing Trump’s treatment of immigrants read: “Yer Maw Was an Immigrant, Ye Nugget.”

The protests did have a serious side, with speakers like popular Labor leader Jeremy Corbyn addressing the London crowd. “We are asserting our right to a world that is not divided by misogyny, racism, and hate. We wish to live in a world of peace not at war, we wish not to blame refugees for wars that they themselves are victims of,” Corbyn said to thunderous applause. “When we divide ourselves by xenophobia, when we divide ourselves by hatred, at the end of the day we all lose. When we unite together with common objectives, we can all win."

A woman leaving the London protest at the end of the day was ecstatic. “I don’t know if we made a difference, but we had a great time,” she laughed. “We saw Jeremy Corbyn, we saw the floating Baby Trump, and we drank gin. What more could we want?”

So on this side of the pond, let’s toast to values and creativity of the Brits and to Baby Trump crossing the Atlantic in time for Trump’s military parade. Join the GoFundMe to bring the big baby stateside. In these grim times, we could use a good dose of British humor.