Bush’s Iraq Lies, Uncontested, Will Haunt Us Under Trump 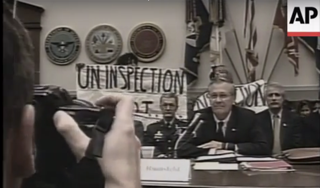 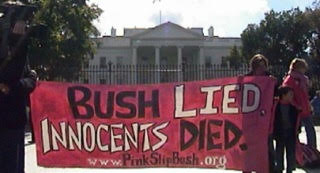 The CODEPINK Tribunal taking place December 1 and 2, and live streamed by The Real News, is a historic collection of testimonies about the lies and costs of the Iraq war. It takes on new meaning with the incoming Trump administration, and the hawks who are flocking to join that administration with their sights set on starting yet another war in the Middle East, this time in Iran.

My testimony started with the first CODEPINK action against the war that took place in Congress. It was September 18, 2002, the day Secretary of Defense Donald Rumsfeld testified before the House Armed Services Committee about why the US military should invade Iraq. He accused Saddam Hussein of having and hiding weapons of mass destruction, raised the specter of an Iraqi-initiated September 11-style attack and told the Committee that Iraq under Saddam Hussein was a global threat.

My colleague Diane Wilson and I were in the audience, just behind Rumsfeld and a row of generals. It was the first time we had ever attended a Congressional hearing. Shaking, I got up and belted out:  "Mr. Rumsfeld, we need weapons inspections, not war. Why are you obstructing the inspections? Isn’t this really about oil? How many civilians will be killed? How many Iraqis will be killed?” We unfurled banners that said: UN Weapons Inspection, Not US War” and repeated that chant over and over until the police came to forcibly remove us.

That was a lie. Iraq did not expel the inspectors. In December 1998, the weapons inspectors withdrew for their safety in anticipation of a US-British bombing campaign. But this was just one of so many lies about Saddam Hussein’s supposed weapons of mass destruction and his unwillingness to yield to weapons inspections.

In February 2003, just weeks before the US invasion, CODEPINK led a delegation to Iraq. We wanted to see for ourselves what the Iraqis were thinking, particularly the women. We found them terrified at the prospect of a US invasion. Some said to us, in hushed voices, “Yes, Saddam is a dictator, but we don’t want the U.S. military to liberate us. That is something we must do ourselves.”

We also wanted to meet with the UN weapons inspectors, and we did. They told us there were no weapons of mass destruction and that even if there were, the very presence of so many inspectors in the country guaranteed that they would not be used.

Two weeks after we returned, on March 7, the International Atomic Energy Agency (IAEA) reported to the UN Security Council. Based on more than a hundred visits to suspect sites and private interviews with a number of individual scientists known to have been involved with WMD programs in the past, IAEA leader ElBaradei stated that the IAEA had “to date found no evidence or plausible indication of the revival of a nuclear weapons program in Iraq.”

Hans Blix of the UN Special Commission on Iraq (UNMOVIC) said no stockpiles or active programs had been found, but it had not yet been possible to document destruction of all the weapons known to have been produced prior to the 1991 Gulf War. Blitz predicted that months but not years, would be needed to complete the job.

The Bush administration dismissed the inspectors’ findings because their conclusions contradicted the US government allegations. The next day, President George W. Bush delivered a radio address to the American people, arguing that the inspection teams did not need any more time, because Saddam was “still refusing to disarm.” The rest is history.

Iraq posed absolutely no threat to the United States. But the US people, traumatized by the 9/11 attack, were easily duped by the Bush administration’s propaganda that Iraq was a terrorist state linked to al-Qaeda, and that it was only minutes away from launching attacks on America with weapons of mass destruction.

Americans were the victims of an elaborate public relations campaign, barraged every day with distortions, deceptions and lies. By the start of the war in March 2003, 66% of Americans mistakenly thought Saddam Hussein was behind the 9/11 attacks and 79% thought he was close to having a nuclear weapon. Of course, Saddam Hussein had nothing to do with the 9/11 attacks, and had no nuclear weapons and no functional chemical or biological weapons. This massive deception was only achieved with the complicity of the US mainstream press, a press that refused to air the voices of dissenters like us and instead sought to commercialize the Iraq war, embed with the military and profit from the invasion.

At CODEPINK, we worked furiously to stop the invasion and continued to protest the war after it started. We held a daily vigil in front of the White House in the freezing cold for four months, we went on a month-long hunger strike, we organized massive demonstrations, we protested at the homes of VP Dick Cheney and Secretary of Defense Donald Rumsfeld, as well as the offices and homes of Democratic and Republican congresspeople. We interrupted dozens of Congressional hearings to speak out against the war. Over and over again, we were arrested for acts of nonviolent civil disobedience, spending much time in cold, bleak jail cells.

For our work speaking truth to power and confronting an illegal, immoral war, we were attacked viciously for being “unpatriotic” and treated like traitors. Conservative groups began coming out every Wednesday night in Washington DC to picket our CODEPINK DC house and launched a campaign to try to get us evicted. The hate mail, death threats and violent phone calls were a constant. The police on Capitol Hill cracked down on CODEPINK activists and judges issued us "stay-away orders" to keep us away from the Capitol. One of our cofounders, Diane Wilson, was even banned from all of Washington DC for a year. Some of us discovered that our names were put on an FBI criminal database, something that has caused us much hardship as we travel overseas for our peace work.

Speaking at the Heritage Foundation in 2007, when the war had already been dragging on for five devastating years, President George Bush exhorted Congress to spend more time listening to the military commanders on the ground in Iraq and less time “responding to the demands of CODEPINK protesters.” We only wish that Congress, and George Bush, had listened to CODEPINK and the millions of protesters back in 2002 when we warned that attacking Iraq would be a disaster.

This is where we stand today: In the face of the Bush administration’s colossal deceptions, Barack Obama, before he even officially took office in 2009, said: "We need to look forward, as opposed to looking backwards." In other words, he decided to ignore Bush's unconscionable invasion, an invasion that continues to reverberate in the current bloodshed in the Middle East, including the creation of ISIS. But the fact that no one was held accountable means that today, many of the very same architects of the Iraq invasion, from General David Petraeus to John Bolton, may join the Trump administration and take us into a new war with Iran.

That’s why the CODEPINK Tribunal is so critical, because those who fail to learn from history are condemned to repeat it.

Medea Benjamin, cofounder of CODEPINK, is author of Kingdom of the Unjust: Behind the US-Saudi Connection.