Bring Your Vagina To The Castro Theatre in San Francisco!

At the Republican National Convention in Tampa, CODEPINK confronted the GOP's attack on women. We donned vagina costumes—taking them into anti-choice events, singing all the way. Our vaginas became the talk of the town, with Current TV doing a whole video on their design and calling them "omnipresent."

You have a chance to join these vagina warriors!

CODEPINK wants YOU—to Bring Your Vagina to The Castro Theatre on October 10th to support Cecile Richards and Planned Parenthood. INFORUM at The Commonwealth Club is giving FREE entry to anyone dressed as a vagina. Any questions? Send Nancy an email. 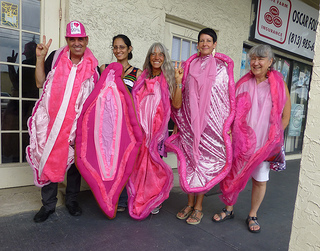 Watch a video of our vagina protest for women's rights!

Together, in San Francisco we will form a team of women (and vagina-friendly folks) who will continue to be unafraid to speak up for our rights and our lives. We will bring our costumes, pink boas, creativity, and inspiration to celebrate Planned Parenthood's Cecile Richards and ourselves!

In June, during a debate over one of the most restrictive anti-choice bills yet, Michigan state Rep. Lisa Brown read a letter from a voter that concluded with a message for Republican Speaker of the House Jase Bolger:

“Finally Mr. Speaker, I'm flattered that you are all so interested in my vagina, but no means no.”

Bolger promptly barred Rep. Brown from speaking on the House floor the next day. Apparently Michigan Republicans think it’s okay to legislate vaginas, but not okay to talk about them. Thousands of women and vagina-supporters gathered at the Michigan Capitol for a special performance of Eve Ensler’s Vagina Monologues and a protest rally.

Eve Ensler famously said: "My vagina's furious and it needs to talk." Our vaginas need to talk, too. They need to talk about the way women's rights are threatened worldwide--from anti-choice legislation to inappropriate rape jokes to economic inequality to war and occupation overseas that disproportionately affect women’s lives.

Bring your vagina costume to the Castro Theatre on October 10 for FREE entry for what guarantees to be a vagina extravaganza!

View the slideshow of the best of CODEPINK at the RNC! 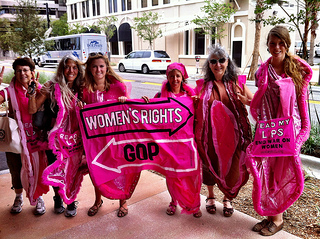