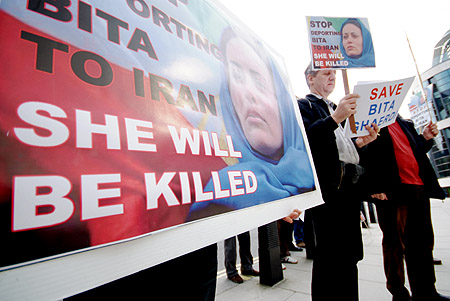 Just yesterday, an Iranian cleric was saying that promiscuous Iranian women cause earthquakes. He may have misstated the particular natural disaster.

An asylum seeker in Britain, Bita Ghaedi, conducted a hunger strike for more than a month because she was terrified of being tortured and killed if she is forced to return to Iran. Yet, despite more than 2700 petition signatures sent to UK Foreign Secretary David Miliband, Bita Ghaedi was violently detained this past weekend and set for deportation this coming Tuesday on April 20, 2010.

After her detention and subsequent escalation of actions from supporters, England ignored yet another hunger strike, demonstrations, and hundreds of letters, emails, calls, and faxes on behalf of Bita Ghaedi. But nature intervened as the volcano that has kept Heathrow Airport closed for five days belched out fresh ash, grounding all flights in and out of Heathrow Airport for the sixth day in a row.

Stranded travelers are fuming, especially since they need to get home to their families. But some are calling it an act of God or a divine intervention.

And since the press is covering the volcanic ash explosion, they could not avoid the hundreds of protesters gathered outside the airport for Bita and turn blind to this gross violation of international law.

Bita Ghaedi's case presents a slippery slope that has global implications for Iranian dissidents in other countries. If England ignores human rights standards and violates the international principle of non-refoulement, which prohibits forcibly returning a person to a country where her/his life or freedom would be threatened, it provides less of an incentive to other similarly situated countries to uphold the law. Bita Ghaedi undoubtedly warrants recognition as a refugee and merits protections under the Convention relating to the Status of Refugees, to which England is a signatory. We must hold England accountable.

In the meantime, Bita is still being held at the notorious Yarl's Wood Detention Center and remains at severe risk not only from the Iranian regime due to her political activities, but also from male members of her estranged family if she is deported back to Iran.