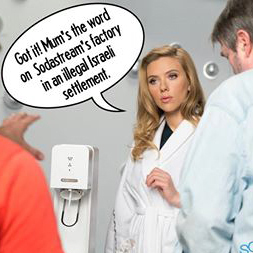 SodaStream markets itself as an environmentally friendly product to “Turn Water Into Fresh Sparkling Water And Soda”… but there is nothing friendly about the destruction of Palestinian life, land and water resources! Although SodaStream products are labeled as "Made in Israel," its main production facility is in the industrial zone of Mishor Edomin, an illegal settlement in the occupied West Bank. As a result, SodaStream enjoys cheap land and water, confiscated from the indigenous Palestinian owners; a captive Palestinian labor force; tax benefits; and lax regulation of environmental and labor protection laws. All Israeli settlements exist in direct contravention to international law! This settlement company obscures its true illegal origin by marking its products “Made in Israel,” however “made in an illegal Israeli settlement” is more like it.

Scarlett Johansson, a movie star and Oxfam Goodwil Ambassador, is the new Global Brand Ambassador for occupation profiteer SodaStream.We have joined other human rights groups in contacting Oxfam, asking them to pressure Johansson to drop SodaStream, and, if she doesn’t, requesting that Oxfam suspend Johansson. We expect to hear from Oxfam within days, and we are hoping that they do the right thing. Take action today by sending a letter to Scarlett Johansson. Occupation isn’t green or guilt free, and she should not let SodaStream use her good name to market illegal settlement goods.

3. Get the Human Rights-Friendly Alternative 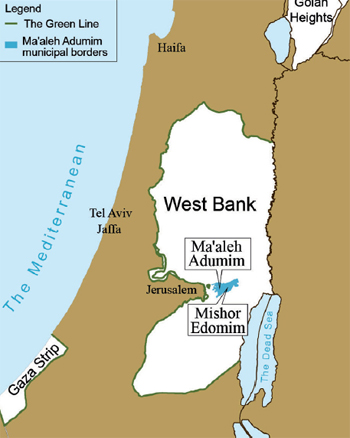 Regional context: the SodaStream factory is located at the Mishor Edomim Industrial Park, in the occupied West Bank.
Map: Shai Efrati. © Who Profits 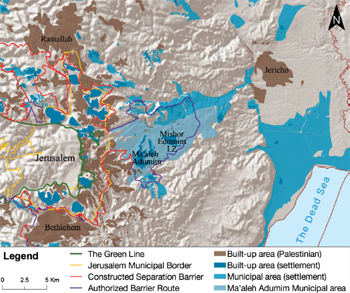 The settlement of Ma’aleh Adumim is strategically located in a manner which disconnects Ramallah from Bethlehem. Map: Shai Efrati. Background topography: Copyright: © 2009 ESRI