Block The Boat return to Oakland!

Block The Boat return to Oakland!
By: Manar Ammar 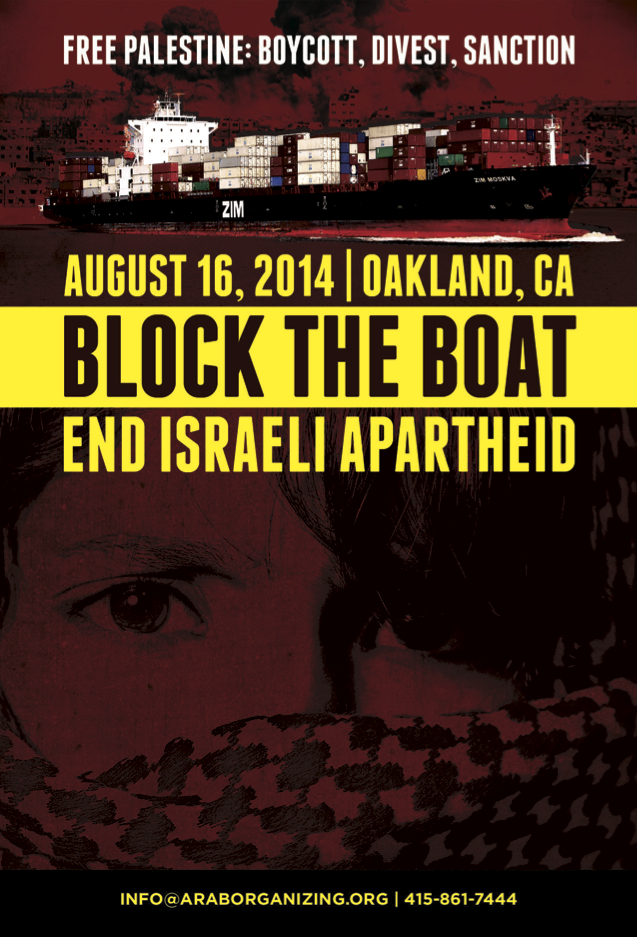 In the 50 day military assault on Gaza, dubbed ‘operation protective edge’, Israel murdered upwards of 2000 people, with as many as 1,800 civilians including around 500 children losing their lives. 11,000 people in total were wounded and some 100,000 were displaced after their homes were leveled in the bombing and shelling.

The attack on hospitals, schools, United Nations' shelters shocked the world awake to the realities of the Zionist military occupation. No one was sparred. Not the children who played soccer on the beach, neither mothers who had to decide whether to divide their family around the house, in case it was hit, so not everyone would perish.

What started as a march on Oakland's port to protest the Israeli aggression soon turned into a power house movement. This escalation against Israel seemed to morph on its own, as the world watched in horror the bloody images on their TVs from Gaza every night for almost two months.

Thousands marched in solidarity with the Palestinian people onto the port of Oakland on August 16. Their mission was to stop Israel’s Zim Piraeus vessel from unloading its cargo. In addition to being partially owned by the Israeli government, Zim Integrated Shipping services is the largest cargo shipping company in Israel. The cargo remained unloaded for four days, a victory for the activists that helped create more momentum.

The march opened the door for action against Israeli crimes and has put the American West Coast on the frontlines of that action against racism and violence.

The Block The Boat Coalition of Los Angeles just claimed another victory over Zim Savannah last weekend when they delayed the docking of the ship at the Long Beach port for around 34 hours. On Saturday October 18, hundreds of activists showed up on the port at 6 am, protested against the unloading of the ship and forced it to stay at sea. Until Sunday morning, the activists were told that the ship is still not docking and that no workers were assigned or called to take its load off.

As the BDS movement continues to grow around the world in light of increasing Israeli war crimes and its Apartheid regime, Block The Boat movements continue to gain steam and are planning a return to the Bay Area.

Block The Boat Oakland plans to return to the docks on October 25, to continue to put economic pressure on Israeli's Zim shipping line as well as exposing the growing list of human right violations and massacres happening against the Palestinian people. For more information visit the Arab Resource Organizing Center.

UPDATE: Take the wind out of Zim's sails!

The Block The Boat action planned for Saturday has been moved to Sunday. The group announced that the Zim is not arriving Saturday, asking supporters to prepare for Sunday. In order to receive updates about the 10/25 Block the Boat, Text "join" to (510) 346-5951
Meeting details: Port of Oakland, SUNDAY, October 26th 3pm Meet at West Oakland Bart and march to Berth 57

Join the Movement for Boycott, Divestment and Sanctions!