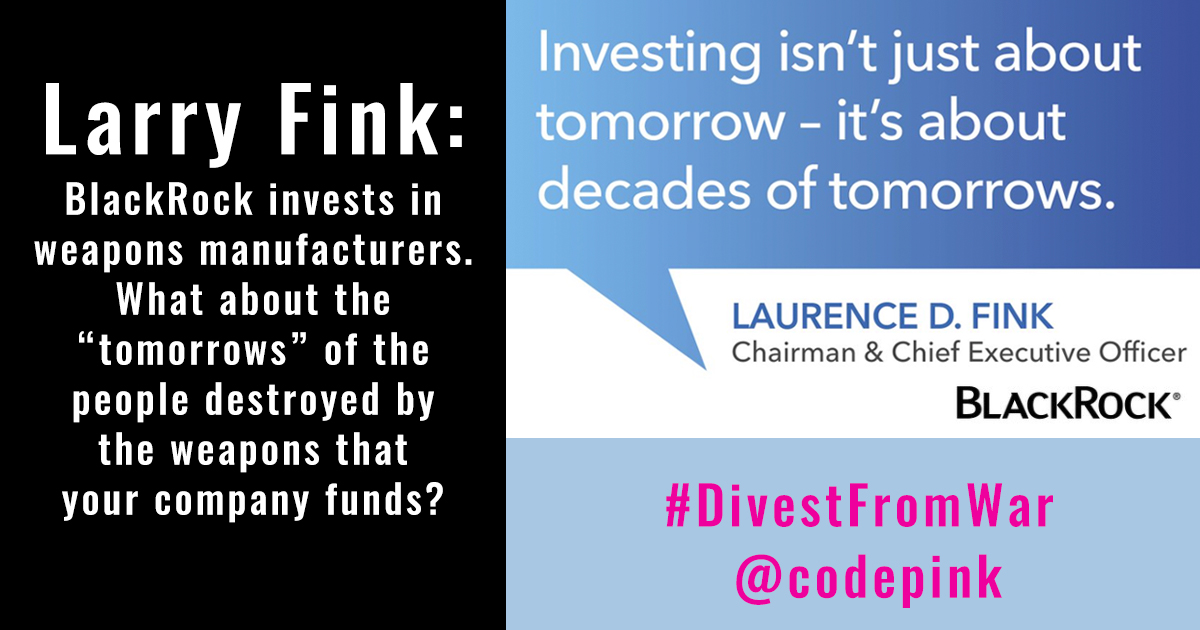 BlackRock is the world's largest asset manager, controlling more than $5 trillion. They're also known as the world's largest shadow bank. They own stock in almost every publicly-traded company around the world, so it's no surprise that they have large shares in the world's most despicable companies. Included on that list are military contractors such as Lockheed Martin, Boeing, Raytheon, Northrop Grumman, and General Dynamics, the top 5 military contractors in the U.S. BlackRocks investments in violence also include civilian arms manufacturers such as Sturm Ruger.

At the end of 2017, BlackRock CEO Larry Fink issued a statement that he was going to start holding corporations accountable for being good global citizens. However, BlackRock remains firmly invested in companies whose sole purpose is to create weapons used at home and around the world.

CODEPINK's campaign against BlackRock asks that they divest themselves from war and weapons. In the first steps of recognizing that weapons business is not good business, BlackRock responded to the Parkland shooting by creating two gun-free funds for investors. And more recently, they voted for a shareholder proposal at Sturm Ruger to force the company to prepare a report on the financial and reputational risks of its product.

BlackRock seems to be beginning to understand that companies who put guns on the streets at home may not be the wisest investments; however, they are still intent on pouring billions into military weapons. It does not matter if the weapon is aimed at our children, or at children in a different country – we have no business making a killing from killing.

It's time for BlackRock to stop profiting from war and weapons, both at home and around the world.