BlackRock stakeholders do not consent to bankrolling violence 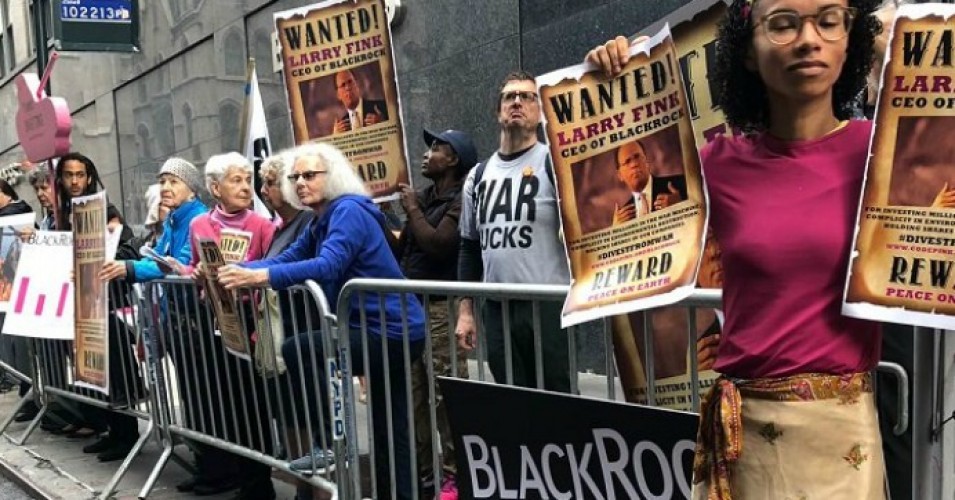 By Leela Loha and CODEPINK

The broader investment world is finally waking up to the power of investing based on environmental, social, and governance-based principles (ESG), whether due to the relentless frequency of natural disasters like the California wildfires, pressure to increase the diversity of corporate boardrooms or the simple fact that sustainability has become good business. In August, assets under management (AUM) in ESG funds exceeded $1 trillion for the first time on record. The industry is growing rapidly. The Morningstar investment universe saw almost 400 ESG strategies launched in 2019, compared to 160 in 2016.

BlackRock, the world’s largest asset manager with over $7 trillion in AUM, has been making a concerted effort over the last year to promote itself as the leader of ESG investing, particularly climate change. In an annual letter to corporate executives in January that made headlines across all major news publications, BlackRock CEO Larry Fink stated he “believe[s] we are on the edge of a fundamental reshaping of finance.”

We cautiously celebrate BlackRock’s recognition of the urgent role it must play in combating the threat of climate change. There is no doubt that the financing of fossil fuel extraction, polluting manufacturing industries, deforestation, and meat production have wreaked havoc on the planet’s diverse ecosystems and life itself.

It is possible to live in a world where the general public’s retirement security does not depend on industries that profit from violence, whether directed against the environment or human life.

As BlackRock has boisterously taken up the mantle of sustainable investing, it must do more to shepherd us into a peace-based economy. A peace-based economy is an alternative economic exchange of goods and services that cuts out firms based on war and violence.

As such, massive and persistent investments in companies that perpetuate war, migrant detention, and the militarization of domestic police departments should have no part in the investment portfolios of a society that is finally acknowledging that black and brown bodies matter.

This summer witnessed a broader racial justice awakening in the U.S. ignited by the murders of George Floyd and Breonna Taylor, as well as the criminally negligent management of private prisons and appalling conditions of migrant detention centers during the pandemic. Will the extent of BlackRock’s response to calls for racial equality increase the diversity of its workforce, or will it finally scrutinize the latent power of the $7 trillion under its stewardship, particularly as it relates to companies that benefit from perpetuating violence?

The $1.6 trillion global defense industry profits from violence on foreign and domestic soil. According to the Watson Institute at Brown University, direct war violence in Iraq, Afghanistan, Syria, Yemen, and Pakistan has already killed more than 800,000 people since 2001. American wars have turned over 8.4 million Afghans, Pakistanis, and Iraqis into war refugees, and 12.6 million Syrians have been displaced, “many as a result of the U.S. war against the Islamic State in Syria.”

Federally subsidized programs dump military equipment from these battlefields into the police departments of American cities, small towns, and universities. Through the 1033 program, the Department of Defense has transferred over $7.4 billion worth of military equipment to 8,000 local law enforcement agencies free of charge. As Alex Vitale of the Policing and Social Justice Project at Brooklyn College points out, “this is really about creating a new market for defense contractors rather than really putting questions of public safety first.”

The fact that businesses selling tanks, assault rifles, machine guns, bombers, and surveillance drones to kill, maim, and imprison innocent people co-exist with companies selling business software or pet food in our retirement portfolios is the ultimate cruelty of our financial system.

BlackRock is the single largest custodian of people’s savings. It manages mutual and index funds for 401(k)s and mandates for public pension fund behemoths that invest assets on behalf of a disproportionately black and female government sector workforce. As an owner of on average 4-6 percent of any given company and frequently among the top five biggest shareholders of publicly traded firms, BlackRock plays a critical role in choosing which firms have access to capital and how a firm’s business model generates returns for investors.

Through a variety of actively and passively managed funds, BlackRock is currently the second-largest shareholder of Smith & Wesson Brands, third-largest of Raytheon, and fourth-largest of Lockheed Martin. BlackRock is also the largest owner of Axon Enterprise. Axon is a weapons manufacturer for law enforcement most well-known for the Taser, a line of electroshock weapons that has killed over 1,000 Americans through the end of 2018, a disparate number of whom were black.

Taking Axon as an example, BlackRock owns 9.5 percent of the company as of September-end. Its investments in Axon are spread across a number of retail products, including both index-based exchange-traded funds (ETFs) and actively managed mutual funds.

Assessing ownership of companies is like squeezing out a drop of ink on a grooved surface and watching the particles scatter into a myriad of crevices. As seen with Axon, BlackRock divesting from a company is not as simple as selling shares in one fell swoop, because of the tens of products that could hold the shares, each with its own investment mandate and rules. Index investing, whereby a manager attempts to replicate the performance of an externally developed index, complicates the power a fund manager has over divestment.

In this context, BlackRock has oscillated between making grand pledges to be at the forefront of what Mr. Fink calls a coming “period of significant capital reallocation” and feigning helplessness in getting us there. In an interview at Morningstar’s annual conference in September, just eight months after the January letter, Mr. Fink walked backward from his claim that BlackRock would fundamentally alter the way it makes investment decisions, declaring, “It’s not my money.”

There comes a time when more is demanded from the stewards of capital. If BlackRock wants to move beyond using ESG as a marketing technique, there are a number of actions BlackRock can take to follow through on its ambitious rhetoric around sustainable investing and racial equity. These include:

Divestment can make a difference in terms of how firms access capital and at what cost. Take the example of the private prison industry. Amidst the public outcry against mass incarceration, California altogether banned private prisons and immigrant detention centers last year. States like Oklahoma have cut contracts with private prisons. Banks also jumped on the bandwagon and have eschewed lending to private prison operators since 2019, including CoreCivic, the face of the for-profit prison industry. Bleak lending prospects led rating agencies to downgrade CoreCivic’s credit rating to junk status.

Facing a capital desert, exceedingly problematic due to a real estate investment trust (REIT)-based corporate structure that requires capital markets access for growth funding, CoreCivic cut dividend payments to zero in June. Further, the company’s Q2 2020 earnings fell 54 percent, and its stock price declined 47 percent in the last year. As the price of CoreCivic’s shares has fallen, its market capitalization has tumbled precipitously, securing its official demotion from the S&P Midcap 400 Index to the S&P SmallCap 600 Index in August. Public activism and financiers getting on board can turn a violence-based industry into a shadow of its former self, both in the markets and in our lives.

Meanwhile, BlackRock is currently still the second-largest shareholder of CoreCivic, owning 10.8 percent of the company. Out of the top ten funds that hold CoreCivic shares, BlackRock products constitute four of them.

If Mr. Fink truly wants to position BlackRock as the leader of ESG investing, BlackRock’s actions urgently need to match his bold promises. A peace economy is central to a sustainable investing future. Eliminating violence-based companies from BlackRock’s product offerings and investing in a peace economy will be necessary to get us there.

After all, if Bank of America, Wells Fargo, SunTrust, BNP Paribas, Barclays, and Fifth Third Bancorp can all figure out a way to end the bankrolling of private prisons, then Mr. Fink better step up his game.

CODEPINK is a women-led grassroots organization working to end U.S. wars and militarism, support peace and human rights initiatives, and redirect our tax dollars into healthcare, education, green jobs and other life-affirming programs. To learn more about the BlackRock campaign visit www.codepink.org/blackrock