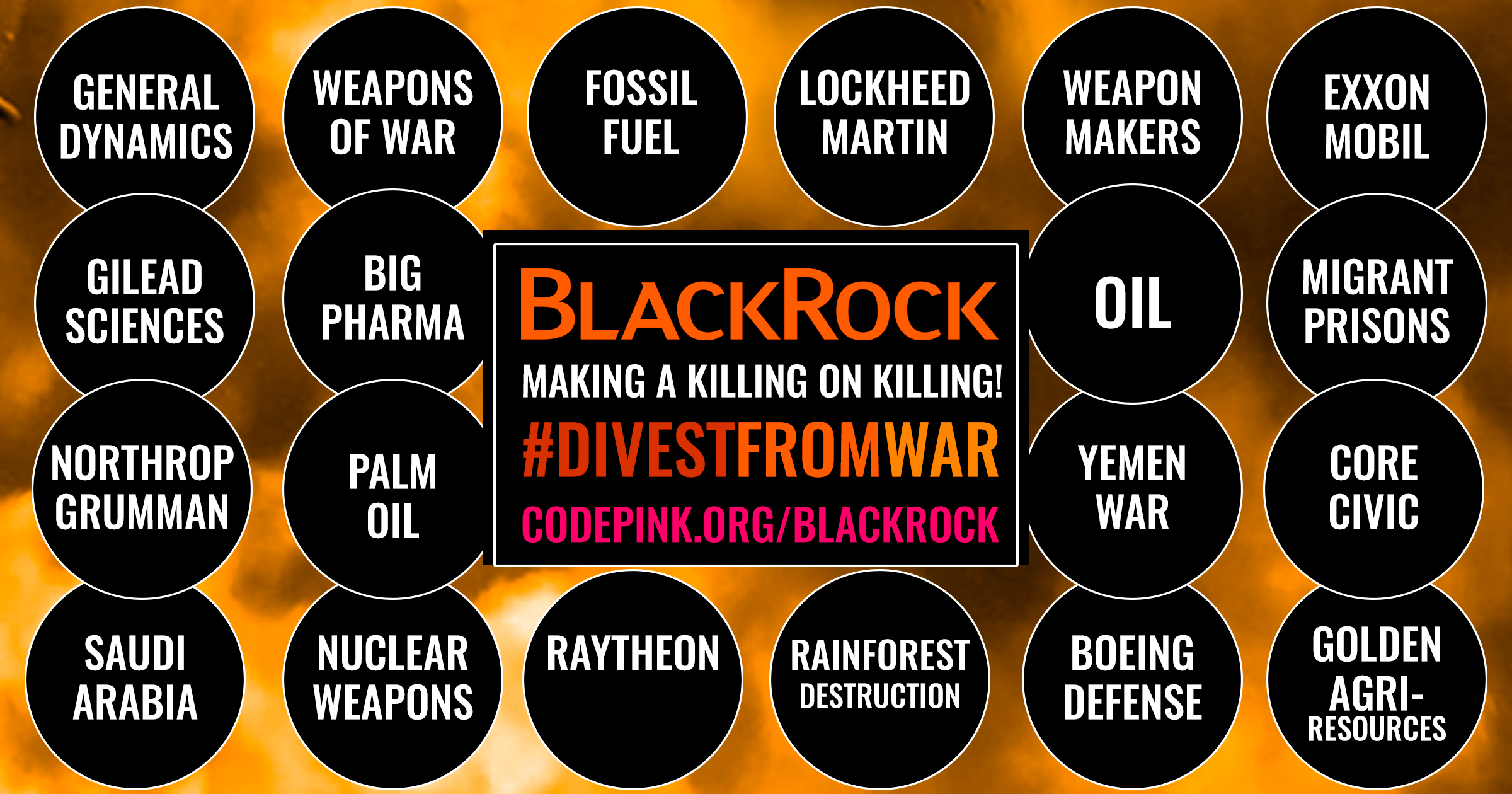 BlackRock CEO Larry Fink’s annual letter to CEOs missed the mark on contributing factors to climate change. BlackRock shareholders and activists are not only distressed about rising sea-levels, unprecedented wildfires, rainforest destruction, and melting glaciers, they are also concerned about the ongoing wars that have permeated the globe. It is often the environment that is long forgotten when wars are raging.

Fink is a global leader who believes he has a deep responsibility to the planet and its people, but when it comes to BlackRock’s weapons investments, he is reluctant to take any responsibility. He blames investors when he declares the money is not ours or we are investing on “behalf of others,” when in fact BlackRock promotes investing in deadly weapon manufacturers through its iShares US Aerospace and Defense Exchange Traded Fund (ETF).

Weapons investments are a risky business. Weapon manufacturers profit from war, conflict, and arms sales. Weapon sales are at an all-time high with the industry sitting close to two-hundred billion dollars. Pope Francis, an opponent of the arms trade industry, has reprimanded countries selling deadly weapons, while at the same time denying safe passage for refugees and migrants fleeing war. BlackRock cannot confront climate change without facing the catastrophic results of its weapons investments.

Weapons investments are unsustainable. The United Nations (UN) calls nuclear weapons the most dangerous weapons in the world which have destroyed entire cities, killed human and animal life, and compromised the environment. BlackRock has been identified as one of the top investors in nuclear weapons.

Trump announced the ease of regulations on landmines. Just like nuclear weapons, landmines are just as dangerous which is the reason the UN adopted the treaty to prohibit landmines in 1997. Landmines disrupt the natural environment and bring harm to innocent civilians. In 2018, over 6,800 people were either injured or killed by landmines with fifty-four percent of children accounting for half the deaths. Nuclear weapons and landmines are just two examples of unsustainable products that are featured in BlackRock’s investments.

Finally, Fink engages in unsavory business relations. On January 22, the UN revealed that Saudi Crown Prince Mohammed bin Salman (MBs) not only tried to hack Jeff Bezos’s phone but that he has existing text relationships with the Wall Street elite including Larry Fink. BlackRock has growing ties to the Saudi Kingdom, even though MBs is waging a war on Yemen. Just last year, it opened an office in the country. Although Larry Fink did the right thing is canceling his appearance to the Saudi Arabia Future Investment Initiative conference because of the killing of Washington Post journalist Jamal Khashoggi, he hasn’t let a “little murder” or war get in the way of doing business with the Kingdom.

Over the past eighteen years, CODEPINK activists have personally witnessed the results from the wars in Iraq, Afghanistan, Yemen, and Syria, the occupation of Palestine, the imprisonment of innocent children at the US border, and the fleeing of refugees from war-torn countries. We conclude that weapon manufacturers need to be held accountable for the killing of human life, animal life, and the planet. The first step to accomplishing this is to stop the flow of money by divesting from one of the top five weapons manufacturers and, also, begin the phasing out of the iShares US Aerospace and Defense ETF.