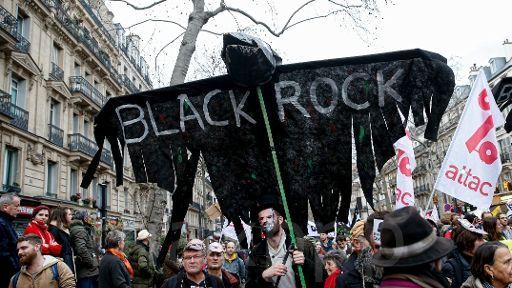 BlackRock has become the primary target of activists in France and Germany. The protests come on the heels of BlackRock CEO Larry Fink’s annual letter about climate change to the leaders of the financial world.

In France, activists once again forced their way into BlackRock’s Paris office shouting “BlackRock Assassins.” The company is the largest investor in climate destruction and some even believe that BlackRock is trying to influence the country’s public pension fund to further expand their business interests. Though BlackRock largely denies these allegations, the idea that they can influence a large institution is not too far-fetched, just look at the company's record. In the United States, BlackRock wields its capitalistic power over the University of California (UC), a public institution of research and learning. In 2018, it was reported that BlackRock has an all-access pass to influence billions of UC funds. BlackRock’s partnership with the university includes placing one of its employees in the UC’s office in Oakland, California.

In Germany, Greenpeace activists demonstrated outside of BlackRock’s Frankfurt office, requesting that the company use its voting power at the Siemens annual shareholder meeting. Siemens provides technology support to the Australian coal company Adani. Even though BlackRock publicly spoke out against Siemens, the company continues to resoundingly support the dirty environmental record of its CEO Joe Kaeser. BlackRock failed to deliver on its sustainability promise and voted for the re-election of Kaeser, signaling that BlackRock’s move to address climate change is merely a glossy marketing plan to rebrand the company.

In its defence, BlackRock spokesperson Brian Deese appeared on CNN with Christine Amanpour and solidified that the company is interested in issues that are affecting the outcome of its investments. BlackRock is taking small steps for sustainability; however, the steps need to be bigger and bolder to combat climate change.

This month, BlackRock introduced a new iShares Exchange Traded-Funds (ETFs) which allows investors to filter-out palm oil, for-profit prisons, and nuclear weapons. The new ETFs are an indication that the company is kind of listening to shareholders and activists. It is a small step, though it needs to be bigger and bolder.

Not only is BlackRock the largest investor in climate destruction, they are also the largest investor in nuclear weapons and weapon manufacturers. We recommend BlackRock use the strategy of divestment to stop the flow of money to the top five weapons manufacturers – Lockheed Martin, General Dynamics, Raytheon, Northrop Grumman, and Boeing defence -- and begin the phasing out of its deadly iShares US Aerospace and Defense ETF. Investments in nuclear weapons and weapon manufacturers fuel the ongoing wars and conflicts across the globe, resulting in the devastating loss of innocent lives.