The Genesis of the Black/Palestine Solidarity, Likened Oppression and Advent of Historic Uprisings 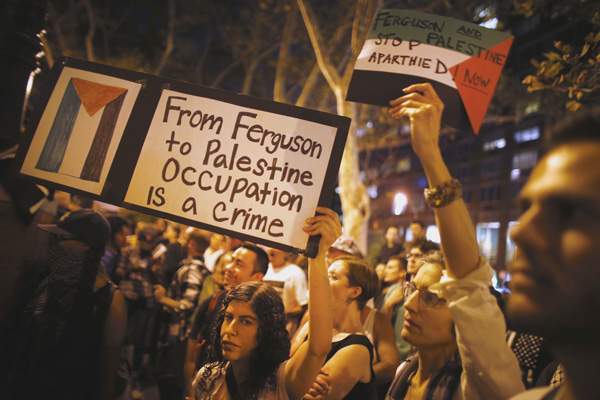 Rodney Paul Harris is a volunteer at CODEPINK currently based in the Bronx, New York City. He is a deep advocate for the Palestine cause and enjoys reading articles from the Mondoweiss, Palestine Legal, and the Adalah Justice Project.

There have been myriad paradigms of the solidarity between Blacks and Palestinians-some transpiring decades ago.

Pugilist-extraordinaire, famed Vietnam War opponent, and Civil Rights activist, Muhammad Ali, articulated his obloquy of Israel, accordingly: "In my name and the name of all Muslims in America, I declare support for the Palestinian struggle to liberate their homeland and oust the Zionist invaders."

Another orator of the abhorrent Palestinian quandary was Reverend, Democratic Presidential aspirant and chairman of the Rainbow Coalition, Jesse Jackson. In an interview with the Journal on December 2nd, 1985, in wonted, silver-tongued fashion the polymath emitted: "We (African-Americans) understand life under occupation because we've been occupied. We understand the violent nature of occupation."

At the other end of the spectrum, Palestine, as reciprocal as the solidarity ordinances would permit summarily took to Social Media, directly ensuing the police killing of Michael Brown Jr., an unarmed Black man in Ferguson Missouri. Additionally, the allies of oppression lamented the umpteenth life curtailed by truculent policing, and expressed categorical solidarity-one beleaguered subset to another. Notwithstanding, what transpired next transcended the uber-lauded overture. During the reverberating, tout de suite protests that erupted, thus, Palestinians, proffering their empirical knowledge on such barbarity edified their counterparts -of -struggle on how to cope with tear gas Ferguson police savagely perpetrated upon them.

Yet another gesture of solidarity from the Palestinian people derived out of tragedy. Mere days ensuing the macabre police execution of George Floyd, Eyad Al-Hallaq, an autistic, 32-year-old Palestinian man was brutally assuaged of his life by Israeli police. Reportedly, the officer "mistook" the defenseless, pillar of his community for a terrorist, inhumanely pumping two bullets into his abdomen. Parallel to the George Floyd enormity, protests in Palestine materialized. However, in addition to the sepulchral tributes to Eyad, placards reading, "Justice for Eyad, Justice for George" became ubiquitous fixtures in Palestine.

The subjugation of Black Americans has drawn parallels to that of the Palestinian people. Indeed, the epochs of slavery and Jim Crow Era have indubitably defined the torture, and oppression of African-Americans. Notwithstanding, Palestinian-Americans can, likewise, indoctrinate one on the topic of predator/prey relations. Since 1948, Palestine has endured the excruciation of ethnic cleansing (Nakba) from Israel, Thus, a cornucopia of Palestinians were forcibly removed from their land, and supplanted by Jewish settlers. Moreover, Israel has sporadically engaged in intermittent military action against the citizens of Gaza. Projecting to the year 2021, the circumstances in Palestine have, sadly, failed to ameliorate. Additionally, as aforementioned, Israel's episodic bombing of Gaza-conjugated with the violent removal of residents in the Sheikh Jarrah purlieu of Jerusalem-have served as an exacerbation to the Palestinian cause.

Blacks and Palestinians unfortunately share another common-denominator: pernicious interactions with law enforcement- perhaps, most notably, George Floyd and Eyad Al-Hallaq, respectively. Whilst there have been a surfeit of additional casualties-in both communities-these paradigms serve as the most superfluously inhumane. Notwithstanding, historic aberrations have transpired: George Floyd's killer was indicted and expeditiously convicted, and the Israeli officer whom commandeered Eyad Al-Hallaq from the aegis of his loved ones was recently charged with reckless manslaughter.

The years 2020, and 2021 produced unparalleled uprisings in the Black and Palestinian communities, respectively; the former materialized, as the international community, aghast at the broad daylight execution of George Floyd, protested in the droves for justice; the latter represented unprecedented, diametrically-singular support for Palestinians, ensuing Israel's predaceous and repugnant military action against the citizens of Gaza.

Whatever the future confers these two oppressed, yet, resilient communities is anyone's conjecture. However, one thing is as axiomatic as the inevitable demise of us all: the status quo of barbarity betiding the Black and Palestinian people shall no longer be countenanced, as resourcefulness, and mettle embody our constitution.