Being History with Iran 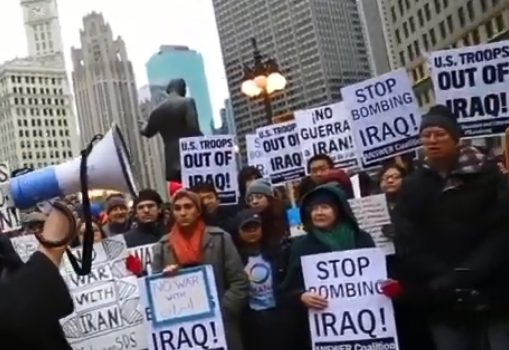 We went to Iran because you have to see these places before the U.S. blows them up, and it’s very good to see you here today in downtown Chicago, that’s also precious, for a similar reason.

Because we have reason to believe that when Iran goes, a lot of other places go as well.  Every war the U.S. begins is another nail in the airless coffin of climate change, that the world then cannot address in the limited time left to us to address it; is another railroad tie in the unswerving track toward nuclear apocalypse that comes with our retention of our nuclear weapons and our eager rush towards a new Cold War – and we’ve got hypersonic missiles now, so this one is gonna be fun; and the economic inequality that is driving our planet into a far right, I say fascist resurgence, and that’s before the crash that’s going to come someday if climate change is real, if markets are unstable, and especially if we shut off all the oil travelling through the Persian Gulf with an insane regional war one step away from the world war it could easily spark into.  And imagine a United States in another Great Depression with the politics we have now; imagine the world’s first fascist superpower with nukes.

But when I went to Iran they all seemed to think they were human beings living right now; who had a right to help shape and move on into the same future we hope to shape and move into.

What I learned visiting perhaps the most patriotic country on the planet is that Iranians are determined not to be pushed around by the United States.  A lot of them don’t want to be pushed around by their own government; and they’ve had some horrible ones.  In 1952 they pushed out the British and we overthrew their democratic government a year later.  In 1979 they tried it again with an Islamic revolution – a lot of the thinking was that ‘they can’t co-opt this’ – the West can’t co-opt this – this is a “Return to Ourselves” and something that they can’t take over – an anticolonialist gesture.  Whenever we get to be our most crazy and vile is when their hardliners take over and I include General Qassem Soleimani who was in the hardline right wing in that government. Every time (and whenever John Bolton is in power!) their worst leaders take over and become a plague to their people, but never as much a plague as their people fear the United States will be.

Sean Reynolds ([email protected]) is a co-coordinator of Voices for Creative Nonviolence (www.vcnv.org). He visited Iran in February 2019 as part of a CODEPINK delegation. A version of these comments was first delivered at the January 4th antiwar rally in Chicago of which Voices was a cosponsor.