Women's voices from around the world

"France is literally bombing Raqaa's hospitals & museums in synechdocal representation of people who've already killed themselves. It's knocking out water & electricity service to a civilian population. It's killing people. Ask why it seems like the natural order of things for bombs to fall on Syria but a monstrous violation for bombs to detonate in France. Ask."

"What happened in Paris on November 13 has happened before, in a shopping district of Beirut on November 12, in the skies over Egypt on October 31, at a cultural center in Turkey on July 20, a beach resort in Tunisia on June 26—and nearly every day in Syria for the last four years."

“I love Paris because it symbolizes happiness to me. I feel sorry about what's going on there now, so I painted this.” 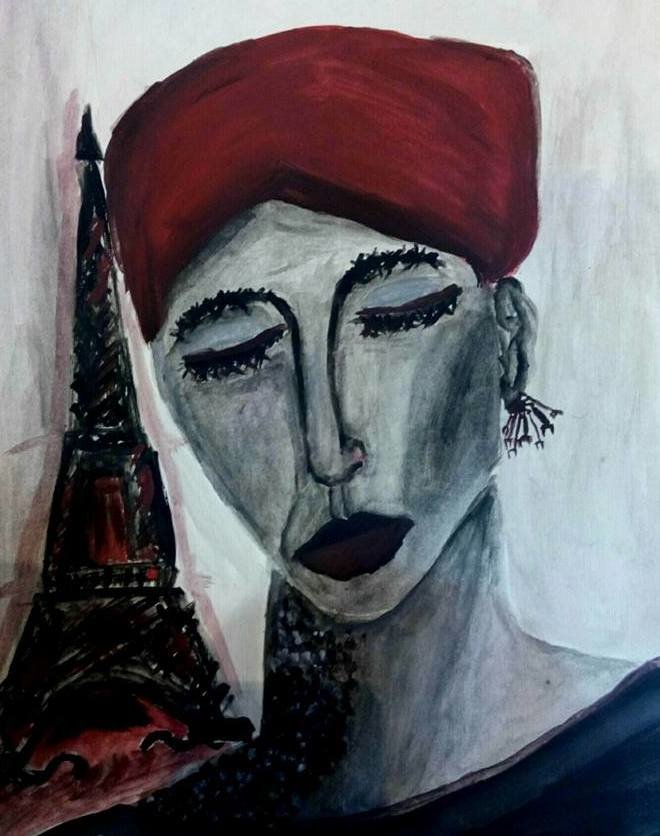 Malak Mattar is a Palestinian from Gaza and just 15 years old, but she is old beyond her years, having lived through three major attacks on her home. And her latest painting is a gesture of sympathy with those suffering in Paris after the terrorist rampage there.

Source: We Are Not Numbers

"French Algerians are still encouraged to stay out of tourist Paris. Curfews are regularly imposed on the estates, with armoured vehicles filled with paramilitaries moving in during disturbances. When particularly heavy rioting broke out in 2005, the then interior minister, Nicolas Sarkozy, imposed a state of emergency."

Didn’t you read the leaflets that they dropped

from their hotshot fighter jets?

They told you to go.

One hundred and thirty-five thousand

Palestinians in Beirut and why

didn’t you take the hint?

There was the Mediterranean: You

could walk into the water and stay

What was the problem?

"A few days after the 9/11 attacks, we at the Institute for Policy Studies and some of our allies organized a public statement whose lead signatories included Harry Belafonte, Danny Glover, Gloria Steinem, Rosa Parks, and many more. The statement reflected the deeply-rooted fear we all shared, that however horrific the attacks of September 11, it was George W. Bush’s statement in response to those attacks that threatened the world. That was the moment he announced that the response to this enormous crime against humanity would be a war—that he would lead the world to war “against terror.”

Susan Abulhawa, author of Mornings In Jenin and 'The Blue Between Sky and Water', founder of Playgrounds for Palestine

In the silence that lives deep in despair

Where it’s unclear how life can go on

There, in that moment

To Beirut and Baghdad

What if they looked now

With a knowing they didn’t know last week?

With a connecting thing

With the humble impulse of grief

That reaches for itself

What if they stayed a while longer in that silence

To find what they know little about

But which was done in their name

By pitiless men who

To pay a “debt” owed by the enslaved

To pave a French terrace

To visit the remnants

Of a former colony’s blast

In Beirut one day before.

Of the same anguish

To discover how utterly splendid

How glorious was Iraq

How precious was Baghdad,

Even under a tyrant.

Then see what they did to her

Aghast at such profound,

Then dig into the words of rules

To see how we are all being duped

And robbed and broken

By the same monsters

Syria did not ask for this

They had already splendor

A subversive sophistication and beauty

That minisculed senior and junior tyrants

Palestine did not deserve this fate either.

Our Jerusalem was your Paris.

What if Parisians would see?

What if U.S. Americans saw after Nine Eleven?

Shunned their cowboy and sinister senators?

Read and investigated, instead?

Tried the guilty and damned

The reorderers of world order?

If so, for Americans then

Maybe there’d be no need to ask