Arise, all women who have hearts!

Arise and tell the true story of Mother's Day. 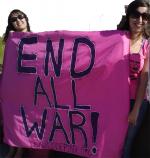 Arise and gather with other women to declare an end to war.

Say firmly:
"We will not make love to war makers.
Our children will not be raised to kill another mother's child.
We are women at home in the world, and recognize the need for peace across all borders."

Governments and corporations have devastated the Earth.
We raise our voices to say, "Disarm! Disarm!
The sword of murder is not the balance of justice."

For ten years, our fellow citizens have waged war.
Let us gather for days of counsel.
First, we will commemorate the dead.
Then, we will discuss the strategies needed to end these wars--in Iraq, Afghanistan, Pakistan, and Libya; to end violent suppression in Bahrain, Syria, Iran, Palestine, Tibet, and elsewhere; to end all violent conflict; to disarm the root causes of war.

In the name of womanhood and humanity, I earnestly ask
That the true meaning of Mother's Day be honored.

This is my modern interpretation of Julia Ward Howe's Mother's Day Proclamation.