Are We Bonobos or Chimpanzees? Evolution and Occupy Wall Street

Bonobos and chimpanzees, our closest animal relatives, are almost exactly the same type of monkey. They are so similar, in fact, they only became distinguished as separate species in 1929. But chimpanzee and bonobo societies are dramatically different. In chimpanzee culture, males dominate, sex is strictly for reproduction and violence and infanticide are common. Bonobo society, on the other hand, is remarkably peaceful and is characterized by an abundance of recreational sex and strong female bonding. This marked difference is inextricably linked to the relative levels of female interaction in each society. In chimpanzee habitats, where food is difficult to obtain, females spend their time isolated from one another, gathering food and caring for their offspring. Their seclusion leaves them susceptible to violence and allows male chimpanzees ample opportunity to fight and build hierarchies. In bonobo society, where food is abundant and easy to gather, females spend most of their time with each other. Pervasive female bonding obscures paternity lines, removing the incentive for infanticide, and offers protection and support against other forms of violence. 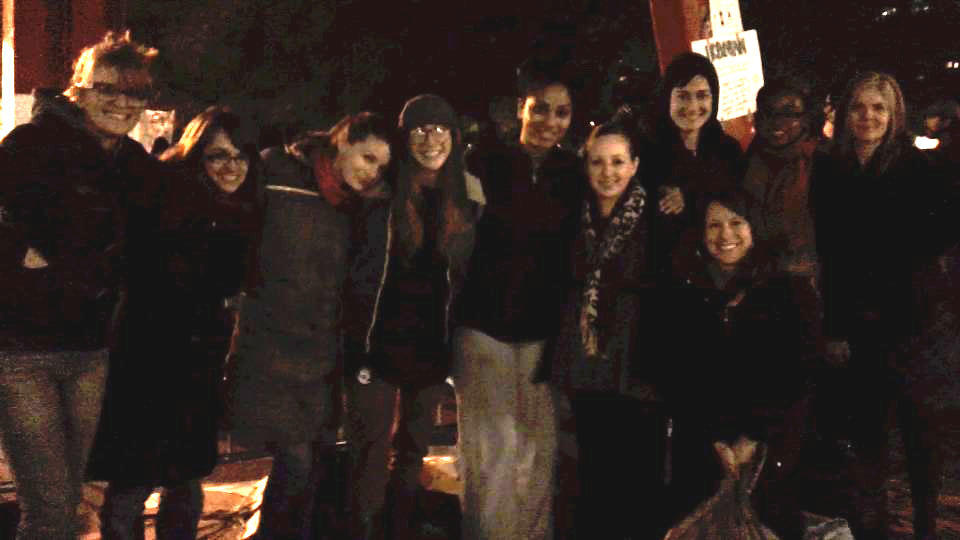 The evolutionary advantages of bonobo lifestyle, well-known among primatologists, served as an introduction to our first Divine Feminine discussion at Occupy Wall Street. Tired of male-dominated spaces and conversations, female occupiers were insisting on the importance of coming together simply for the sake of, well, coming together. Unlike WOW (Women Occupying Wall Street), there was no agenda, no actions being planned. The purpose was solely to meet and share what was on our minds without men present.

To be perfectly honest, I entered my first Divine Feminine discussion out of duty rather than desire. I had more than enough commitments, caucuses and events competing for my time – meeting for meeting’s sake was not a priority. I was also a bit put off by the group’s name, with its whiff of gender essentialism. I was more interested in dismantling gender binaries than discussing estrogen with a bunch of earth mothers.

But I have also experienced my share of sexism at Occupy Wall Street. I have watched too many women shrink from sharing their ideas, too many temperate voices shouted out of conversations, and too many important issues squeezed off of the agenda. I have heard too many terrible stories testifying to the very real violence and dangers plaguing female occupiers as night falls. And after over a month of pushing aside the things that are most important to me – family, friends, physical health – in the name of building a better world, the idea of taking time to nurture human relationships, bonding, and conversation, hit a nerve. So I figured I would make a show of solidarity, get in touch with my Divine Femininity for a few minutes, and then get back to work.

It turned out I was not alone. Perching just outside the circle to signify their non-commitment, several attendees announced at the outset that they could only stay ten minutes, just came to check things out, "what is Divine Feminine anyway?" That’s when my friend Ketchup shared the story about the bonobos, explaining that when women spend time together, all of society benefits; when we isolate ourselves, society suffers. By the time she reached this simple conclusion, everyone had drawn in closer.

Ten minutes came and went and nobody left, except to run to a bathroom or grab a hot chocolate from the nearby falafel cart. One woman returned triumphantly wielding a large pizza and proudly announced that she had used her “Divine Feminine powers” to procure it from the OWS kitchen team. Over the course of the night it became clear to me that the value of the group, what set it apart from the 60-odd other groups operating at Occupy Wall Street, had nothing to do with biology. Rather, what kept us there was a testament to how, as one woman put it, “the feminine act of listening is beautiful and radical.” 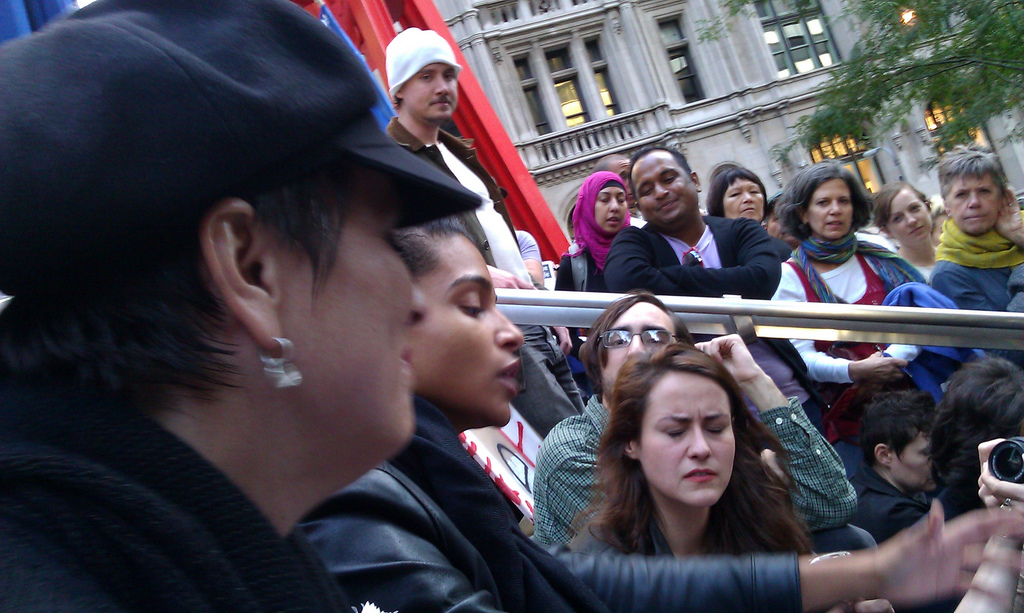 In the past weeks I’ve experienced numerous bonobo-style communities emerge from the radical, beautiful, and sometimes challenging, act of listening at OWS. Last week after a Safer Spaces sleep-out, as we drank our coffee and rolled up our sleeping bags, the person I slept next to suggested everyone play a game. I was about to skip it when, realizing I hadn’t even learned my fellow safe-spacer’s name, I checked myself and decided to stick around. After five minutes of the silly exercise – depicting our hairstyle evolution on pieces of cardboard – it was clear that we would no longer need a pink flag to demarcate the safe space we had created among one another. Just the day before the sleepout, two people I had never met separately, mysteriously, showed up to lend support as I was facilitating a meeting that threatened to be disrupted. I later learned they were friends of someone with whom I had locked tear-filled eyes during a particularly moving moment of the story-sharing session I help coordinate. After the session we had bonded over the experience, and when I briefly mentioned the meeting, she silently enlisted everyone she knew to attend. Like bonobos, they showed up to protect the group's ideas against violence and possible “infanticide.” 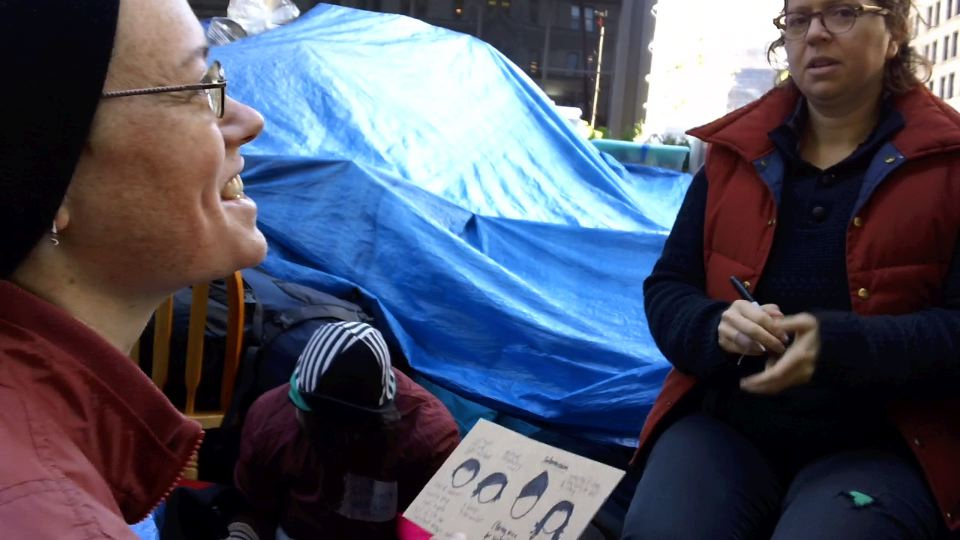 Which brings me back to evolution. In the early days of Occupy Wall Street, before Divine Feminine and WOW were formed, I found my home in the Speak-Easy Caucus. Like WOW, Speak-Easy originated as a safe space for voices and ideas that were being pushed out of the larger conversation of the General Assembly. Originally open to anyone who did not identify as 100% male, Speak-Easy later evolved to include a spectrum of individuals, from female-bodied people identifying as women to male-bodied people who did not identify as traditionally masculine. Although it made sense for Speak-Easy to include a diversity of people, including men, who had difficulty having their voices heard, many women felt it was also important to maintain a safe space exclusively for women and non-males – and thus, WOW was born. Speak-Easy itself would later disband as many of its members became active in the Queer Caucus.

This week the entire structure of the General Assembly and Occupy Wall Street will evolve to adopt the spokes council model passed by the General Assembly on Friday. The spokes council model is meant to improve coordination, accessibility and transparency at Occupy Wall Street and to better empower marginalized voices in groups such as WOW, the Queer Caucus and the People of Color Working Group to communicate their needs and be involved in decision-making. The model is not without its critics – it has undergone countless revisions, been the subject of daily teach-ins, and was presented to the General Assembly on four occasions before finally achieving approval by a 9/10 consensus on Friday. The adopted proposal is itself a living document, and was accepted with the understanding that it would continue to evolve in response to the many concerns raised by members of the OWS community.

It's no surprise that Occupy Wall Street is far from perfect. But what I have witnessed in the evolution of Occupy Wall Street, what differentiates us from dominant society and makes this movement worth fighting for, is a genuine willingness to confront our problems and create a community where all voices can be truly equal. We have a lot working against us, not the least of which is centuries of practice doing things the other way – building hierarchies based on race, class and gender, protecting systems of privilege and rewarding the loudest and most dominant voices. But slowly, together, we are learning how to listen.

I’ve heard people poke fun at the emphasis we put on “Process” at Occupy Wall Street. To me, the beautiful and radical act of listening is not about feminine or masculine, but simply about respect – respect for each other and, yes, for our agreed-upon (and ever-evolving) processes of communicating and interacting. When process breaks down – when groups operate without consensus, people and ideas are attacked, voices are silenced – there is no criteria of inclusion that can enforce a “safe space.”

Without respect for each other, we are nothing but chimpanzees. In order to survive, we must learn to live like bonobos. And the more we continue to evolve together, the better the chances that evolution will one day lead to revolution.