AND WE ALLOW THIS MADNESS TO CONTINUE 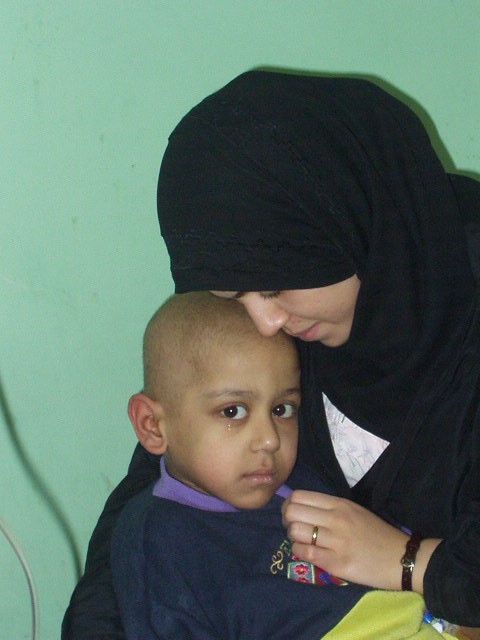 Adra and her 5-year-old son Atarid in hospital. Atarid suffered from cancer. He died on the 3rd day of the the United States Shock and Awe bombing.

Try as I did, I found it impossible to send New Year’s greetings to friends in Iraq given the unthinkable and shameless actions of Trump and his regime in the last weeks. His decision to assassinate Iranian Major General Qasim Soleimani at the Baghdad airport led to the Iraqi Parliament voting to expel all foreign troops from Iraq. Trump’s quick response to that was “If they do ask us to leave, if we don’t do it in a very friendly basis, we will charge them sanctions like they’ve never seen before ever. It’ll make Iranian sanctions look somewhat tame.”

In 1996,Voices in the Wilderness began visiting Iraq in defiance of the economic sanctions. The campaign bore witness to the crippling effect of US sanctions imposed on Iraq after the first Gulf war. Over thirteen years, approximately seventy delegations traveled to Iraq, enabling us to build lasting relationships with Iraqis.

Trump’s threats a few days ago to put sanctions on Iraq, “sanctions that would make Iran sanctions seem tame,” can only be called blasphemous.

This morning I am reading from a communication I wrote on November 8, 2002 from Baghdad :

Together with others in the Iraq Peace Team, I was invited to the home of a Muslim woman (well known to Kathy Kelly) who had gathered some of her friends to meet with us...While apologizing for seeming rude, the hostess asked us pointedly ‘Why are you here and not in your own country speaking to your president, to your own government?....How is it possible that you are allowing them to do this?  What right does your president have to attack us, to ruin our country?’ With tears in her eyes, she asked,‘Where is your Christianity? We loved your Christianity.’

Her impassioned call to us, and that of the other Iraqi guests present, was ‘You need to see to your own house!’ A hard message we all need to hear again and again. God knows, we have attempted to reach the US media and government through demonstrations, vigils, fasts and acts of civil disobedience as well as letters and phone calls…. We can no longer afford to be silent; our silence has now indeed become complicity.  We must find ways to counter this madness.

This was written just a few months before the US-led invasion of Iraq. I was in Baghdad with The Iraq Peace team,  launched by Voices in  the Wilderness as war against Iraq seemed more and more imminent. We intended, in the event of war, to live alongside ordinary Iraqi people, believing that all life is precious and valuable.  Some of us remained in Baghdad throughout  the “Shock and Awe” bombing campaign.

Just two days ago on a bus returning from Philadelphia to New York city (I go weekly to be with my 94-year-old mother), I was finally able to compose a letter to two trusted and long-time friends in Baghdad.

I explained how wordless I had felt, at the beginning of the New Year. I said I felt horrified by recent US bombings and the assassination of Gen. Soleimani. Trump’s threats (even of imposing crueler sanctions on Iraq) were too shameful to repeat. And, I said, we allow this madness to continue!  I pictured them trying to carry out their daily work and could only pray for their strength, stamina and renewed spirits.

Yesterday one of these friends replied:

Thanks so much for your warm words, happy New year for you and family, may God bless you by keeping your mother longer in good health.

As you said the words failed us, as we are passing very hard threatening time without knowing the reason for being the target of world politics over the last 4 decades with end result of complete collapse on all levels and the most important is moral damage of people with loss of hope, helplessness and frustration.

We need the support of all good will people in the world as we are simply human beings like them.