In the first protest against Cayman Island tax shelters the island has seen, on Thursday, December 13, over 100 Americans marched to the Ugland House, the location where some 18,000 corporations hide their tax dollars, to demand that corporations pay their fair share of taxes.  They held signs saying “Bring our tax dollars home” and “We want our money back” and sang a parody song to Harry Belafonte's "Day-O" with the refrain "Tax evaders time to bring the money home."  Four of them were dressed as billionaires, waving their money in the air in a theatrical show of corporate greed.

Many US companies use the Cayman Islands as a tax haven so they can cheat the US people out of much-needed tax dollars.  There are more registered corporations in Grand Cayman than there are people.  President Obama referred to Ugland House as "either the biggest building in the world or the biggest tax scam in the world."

The protesters are traveling with the weekly magazine The Nation, and the protest was organized by the activist group CODEPINK. This focus on tax shelters takes place at a time when US officials are engulfed in a tug-of-war over what budget cuts to make to avoid what they are calling the “fiscal cliff.” “The US deficit could be solved with the $150 billion a year that could be recovered from these offshore tax shelters,” says CODEPINK cofounder Jodie Evans. 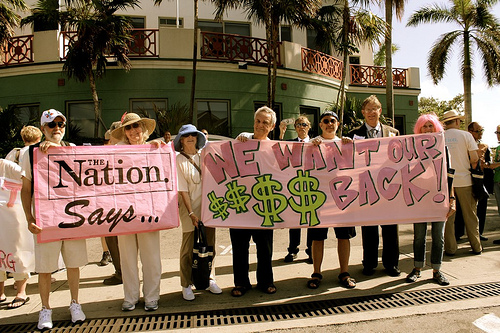 “The American people, exposed to the issue of tax cheaters during Romney’s presidential bid, believe that corporations should pay their fair share,” said CODEPINK cofounder Medea Benjamin. “That’s why we are here, in the Cayman Islands, to demand that corporations such as Exxon, McDonalds, and KBR bring the tax dollars home.”

On Tuesday, Premier McKeeva Bush was arrested by officers from the financial unit of the Royal Cayman Islands Police service.  As of now, he is suspected of “theft related to misuse of a government credit card and breach of trust for the alleged importation of unspecified explosive substances without valid permits.”


Chairman, Richard Coles, says while they’re always happy to welcome visitors to learn more about Cayman’s economy, he says the U.S. defers taxes on the income that U.S.-based corporations earn abroad. Mr. Coles says if protesters think that’s wrong they should go and see the U.S. Congress.
Mr. Coles says Cayman’s government and the financial professionals of Cayman can’t change that. He says only the U.S. Congress can.