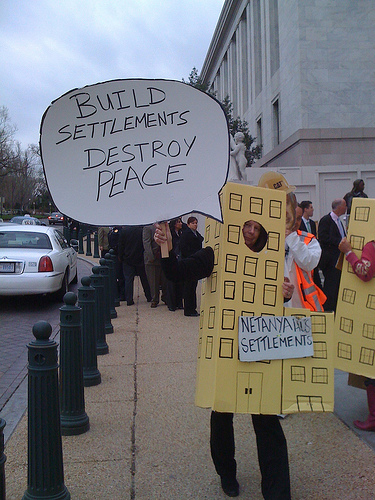 The American Israel Public Affairs Committee occupied the Washington Convention Center this past weekend importing a culture of uncertainty and paranoia into the Capitol.

Most AIPAC attendees came to the conference uncertain about American-Israeli relations. Besides condemnation from Vice-President Joe Biden, even General Petraeus testified a couple weeks ago that Israeli actions put American troops in danger in the region. David Axelrod from the Obama Administration also declared that Israel was undermining fragile efforts to bring peace to the region by continuing to build settlements.
These condemnations and the subsequent silence of AIPAC on the issue of settlements is quite deafening. By remaining silent on the issue of settlements and providing a platform for speakers who promote policies in direct conflict with the United States, AIPAC has proven that it is simply a cheerleader for the Israeli government. That is why we support the legal filing presented by IRmep, the Institute for Research on Middle East Policy, calling on the Department of Justice to regulate AIPAC as a “foreign agent of the Israeli Ministry of Foreign Affairs.

CODEPINK turned to the issue of AIPAC after a week of organizing demonstrations marking the 7th anniversary of the Iraq war and building a campaign to stop the DC City government from offering a taxpayer subsidy to the war profiteer Northrop Grumman.

We held actions both inside and outside AIPAC during every day of the 3-day conference. We built mock settlements. We held rallies. We brought sample Israeli products that should be boycotted. And we scored some small wins with our brand of creative organizing.

On Monday morning, CODEPINK issued a fake press release from AIPAC calling for the freeze of Israeli settlements. Many media outlets bought it, including CNN, NPR, Al-Jazeera, and ABC News along with CSPAN showcasing this “breaking news” during Hillary’s Clinton’s speech to AIPAC. While some of the press was miffed by the fake release, most commentators felt the fake press release was a brilliant move since it forced AIPAC to say it was not against settlements, thus putting AIPAC at odds with the White House and the State Department.

When the prime minister announced Israel’s commitment to defense, I could no longer remain silent. After all, what part of denying crayons, notebook paper, and select fruits to Palestinian kids in Gaza has to do with defense?! I jumped onto AIPAC Executive Director Howard Kohr’s private table alongside the stage and unfurled a pink banner that said “Netanyahu: Build Peace Not Settlements!” I shouted, “Lift the siege of Gaza! No illegal settlements!” as I was forcefully removed from the building.”

A second disruption came moments later from CODEPINK activist Joan Stallard, who shouted, “Stop the settlements!” Both were hauled out and no charges were pressed.

On Tuesday, when AIPAC folks were lobbying on the Capitol Hill, we took our mock settlements to the Hill and occupied various congressional offices.

While hundreds of our elected officials in Congress continue to bow down to AIPAC for fear of incurring their wrath at election time, CODEPINK was out there at both the Convention Center and Capitol Hill, inside and outside, fearless and forceful. AIPAC still holds sway in Washington DC, but the tide is turning.