Afraid of ISIL? Use Iran Success as Opening for Mideast Peace 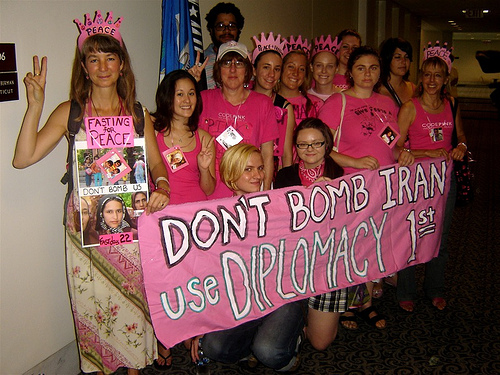 US: Stop Collaborating with Saudi Arabia and Israel for War; Build on Cooperation with Iran for Peace

This week’s announcement of an historic six-party agreement with Iran to limit nuclear weapons is cause for three things the peace movement hasn’t had enough of lately: celebration, hope and opportunity.

First, celebration. While the agreement is not complete (Congress could undermine the US/UN end of the deal, the lifting of sanctions), the mere fact of Iran, Russia, China, France, Germany, the UK and the US coming to terms is worth celebrating. It reminds us that diplomacy can work. It’s encouraging to remember this, while it’s so clear that (even for the purported US agenda) war is not working, including against ISIL.

In the agreement, Iran was also able to preserve its sovereign rights to power its nation as it sees fit. Whether or not one supports nuclear power, this is an important victory in an age when bankers, the U.S. and allied militaries, and other elites, as in Greece right now, regularly impose chaos, austerity and outright regime change over democratic governments and popular sentiment. Although not sufficient, sovereignty is certainly necessary to democracy.

Most importantly as we look for the human side of this story, Iranians are celebrating with relief in the streets. Due to US hype over Iran’s non-existent nuclear weapons plans, Iranian people have lived under a regime of punishing economic sanctions for years, as well as the ever-present fear of imminent military attack, including “obliteration,” which Democrats and Republicans have threatened on and off since 1979. Iranians are celebrating the prospect of a bit more physical security, the promise of a freer flow of goods – and access to their own money. The agreement increases human security in Iran.

Hope. Human security anywhere increases human security everywhere. The Mideast has been embroiled in festering and spreading conflict, certainly since the US launched the second Gulf War twelve years ago. While the “hot,” officially-declared US wars in Iraq and Afghanistan have been declared “over,” the US military is still involved in both countries, as well as in other overt wars, including in Syria. Other actions by the US and its regional allies also continue to deliver pain and death: one-sided bombing operations, such as the US is carrying out over Iraq (again) and those the Saudis are carrying out over Yemen, covert wars such as in the Ukraine, and various forms of incitement and destabilization, from arms flows out of Libya to training to propaganda operations. Remember how the “anti-Assad” forces were “about to take Aleppo” for months a few years back? It’s been a pretty hopeless decade for the peace movement, let alone those in the sights of the US military scopes. But in this lame-duck period for the Obama administration, which has seen more progressive policies, this agreement could mark a shift away from failed US militarist strategies and towards diplomatic ones.

Phyllis Bennis of the Institute for Policy Studies characterizes the conflict in the region as mainly a struggle between Iran and Saudi Arabia for regional hegemony. Since Washington’s second method, after overt warfare, is to exert indirect hegemony through regional allies, the U.S. government's strategy has been to support Israel, who overtly opposed the agreement, and Saudi Arabia, while undermining their chief rival, Iran.

Flynt Leverett, former CIA and NSC staffer, said on Monday that “Relying overly much on partnerships with Israel and Saudi Arabia is increasingly dysfunctional for the U.S. position,” and “is breeding jihadi terrorism across the region.” Leverett calls on the US instead  to recognize Iran as a rising regional power, for its own sake. He says that for the US to “get serious” about the rising threats of jihadi terrorism in Iraq and Syria, the US must “work with Iran to devise a regional strategy to contain that threat.”

Opportunity: The Iran Deal is the opening. The full-court press by the right wing in the US and Israel against the agreement, hollow for its lack of an alternative, and transparent for its implicit call to war, is backward-looking to 1979, a Cold War world we have left behind. This agreement symbolizes the possibility of a forward-looking stance favoring a greater regional stability, where the US evolves and adjusts to cooperate as a big player in a multi-polar world. Many of our other terrifying global challenges, including climate change, require this, too. We as a peace movement have a chance to push this door open wider by pointing out how war isn’t working but diplomacy is, supporting the President as he sticks his neck out on the Iran agreement and rebalances US regional alliances, and support more common-sense, tested solutions to even truly terrifying threats like ISIL.