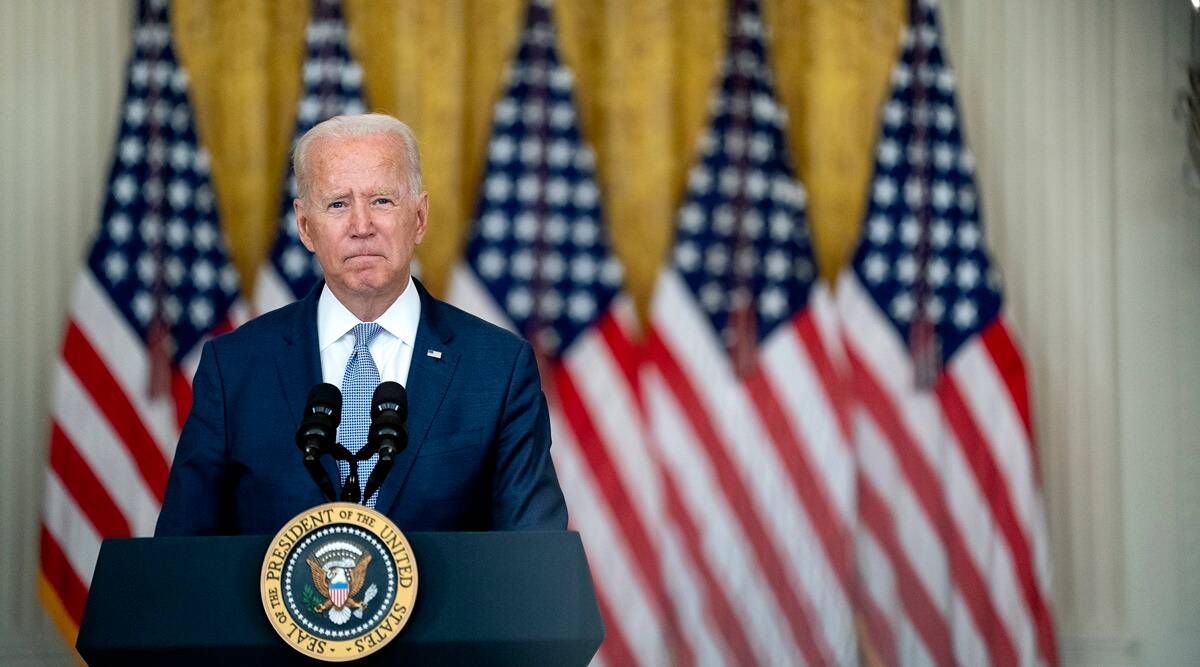 By Sam Carliner and Jimena Vergara

While the withdrawal of U.S. troops from Afghanistan is a long sought-after demand for many in the United States, Biden’s speech should be viewed, not as an honorable act of leadership, but as an admission of defeat and an attempt to reframe the 20-year war in a way that salvages the status of U.S. imperialism on the capitalist world stage.

Biden made good on an agreement previously established under Trump, who effectively handed the country over to the Taliban and secured little to nothing in the “negotiations” for the Afghan client government.

The U.S. withdrawal has been a mess. The world has watched the shocking scenes of Afghans clinging to and falling from airplanes at Kabul airport in desperate attempts to escape the coming rule of the Taliban.

What happened in Kabul is a retelling of the story of Vietnam. After the Vietnam War, U.S. political and military leaders vowed they would never replicate what happened there, and yet that’s precisely what they did. In 2001, Democratic and Republican leaders vowed repeatedly that intervention in Afghanistan was about getting Osama bin Laden and rooting out Al-Qaeda, and repeatedly dismissed any comparisons to Vietnam. Nevertheless, the United States intervened in a civil war, had no clear mission, no exit strategy, and so on; like the Vietnam War only decades before, politicians and analysts contorted themselves into rationalization after rationalization to continue the war in Afghanistan. All this occurred while top generals lied to the public for 20 years about the state of the war.

In some ways, Biden’s speech on Monday attempted to shift focus away from the damning legacy of U.S. involvement in Afghanistan and convince the public that the United States’ role was noble and the loss was out of its hands. Throughout his speech, Biden told easily debunked lies about the history of U.S. involvement in Afghanistan, including his own role in overseeing the war during the Obama administration. Most notably, he tried to assert that the United States was never in Afghanistan to “nation build” and that Biden didn’t support sending more troops to the region while he was Vice President of the Obama administration.

In fact, on the campaign trail in 2007 Biden unequivocally said, “If we surge troops anywhere, it should be in Afghanistan.” He then went on to argue that the United States should demonstrate to its European allies that it is committed to “rebuilding” Afghanistan.

The hasty withdrawal and the rapid fall of Kabul sealed the defeat of the so-called “War on Terror,” the last hegemonic project that U.S. imperialism opened back in 2001, under Republican president George W. Bush. Even then the United States was trying to dig its claws into the country and the region. In announcing “Operation Enduring Freedom,” Bush promised that, in addition to fighting the terrorists, the United States would deliver food, medicine, and supplies, and that “the oppressed people of Afghanistan” would know what he called America’s “generosity.”

Perhaps one of the most shocking points in the speech was when Biden blamed the rise of the Taliban on the inability of the country’s military and political leaders to fend for themselves. “Afghan political leaders gave up and fled the country,” he said, asserting that the Afghan military had simply laid down its weapons after two decades of U.S. training and hundreds of billions of dollars in equipment and resources invested by the United States.

But Biden painted a distorted picture of the reality of the United States’ intervention in Afghanistan. The United States was defeated and humiliated by the Taliban. The world has now seen this defeat in “real time,” as two-decades’ worth of tragedy for the Afghan people was compacted into five days.

The Afghan military defeat is a U.S. military failure, and the limited resistance to the advance of the Taliban is a product of a failed strategy that was never able to build political cohesion within the Afghan ruling class. Further, it is undeniable that part of the reason U.S. imperialism was defeated in Afghanistan is Afghanis’ unwillingness to embrace the country’s status as a U.S. client state in exchange for inadequate relief from Taliban rule.

In fact, the United States was slowly losing the war to the Taliban for the entirety of the conflict. This was proved in 2019 with the publication of The Washington Post’s Afghanistan Papers, a collection of documents and interviews which reveal that from the very start of the U.S. invasion in 2001, top officials behind the war had no plan for what they were doing and continuously presented a false picture of stability regarding U.S. presence in Afghanistan.

Most damning for Biden is a revelation that the Obama administration covered up the failure of U.S. military and intelligence operations. When generals presented Obama with various metrics demonstrating that the United States was losing spectacularly to the Taliban, Obama demanded that top officials create new metrics that the administration could use to present a favorable image of the U.S. occupation to the public and the bourgeois press.

During the speech, Biden repeatedly invoked the lives of U.S. soldiers to garner support for his commitment to withdraw. “How many more lives, American lives, is it worth? How many more endless rows of headstones at Arlington National Cemetery?” he asked.

It’s true that U.S. troops — often poverty-drafted into the military from Black, Brown, and poor white communities — should not be sent to die in Afghanistan for the sake of U.S. imperialist interests. However, Biden’s focus on “American lives” is a framing that any true anti-imperialist should adamantly reject.

The U.S. military was an aggressor in Afghanistan for 20 years. U.S. bombing campaigns in Afghanistan killed civilians (primarily women and children), and throughout the war there were many examples of U.S. troops committing dehumanizing atrocities on the people of Afghanistan.

Even without the U.S. military inflicting direct violence on Afghans, the imperialist legacy of the United States continues in the form of the Taliban. The United States funded Osama Bin Laden and the creation of his mujahadeen militia. The United States armed these extremist militias in Afghanistan in the 1980s as part of the Cold War and the offensive against the Soviet Union. Many of these militias would go on to form the Taliban and were handed a prime opportunity to gain control of the country as the United States destabilized it over the last two decades.

Biden’s National Security Team has used the idea of a “rules-based order” led by the United States and countries committed to “human rights” as a justification for economic warfare against countries outside the U.S. capital’s sphere of influence. What the United States has done to Afghanistan is a glaring example of how those are just excuses put forward by the bipartisan regime in the context of its imperialist interests, not something the U.S. government really stands for.

Hence, Biden emphasizes the loss of “American lives” and completely disregards the mass death and violence to which the United States subjected Afghans. This all serves to reframe public opinion of the conflict and soften potential opposition to future imperialist endeavors.

The political impact of the collapse of the Afghan government — a U.S. puppet government with little legitimacy — over the weekend seems to have taken the White House by surprise, which partially explains why it took the president so long to react to criticism from Democrats, Republicans, and even Donald Trump himself.

Senator Mitch McConnell, head of the Republican minority in the Senate, called the events in Afghanistan a “monumental collapse” and said that the responsibility lies squarely with the current president. Seth Moulton, a Democratic Congressman and former Marine captain, said the administration had made “not only a national security mistake, but also a political mistake.”

“I’ve been asking the administration for a refugee evacuation plan for months,” said Moulton. “I was very explicit: ‘We need a plan. We need someone in charge.’ Honestly, we still haven’t really seen the plan.”

For his part, Donald Trump said, “The outcome in Afghanistan, including the withdrawal, would have been totally different if the Trump administration had been in charge. Who or what will Joe Biden surrender to now? Someone should ask him if he can find it.”

Beyond how Trump, the Republicans, and Biden capitalize on the political impact of the crisis created by the situation in Afghanistan (which today seems unfavorable to Biden), the reality is that Biden did nothing more than execute Trump’s agenda.

Biden’s speech, in which he insisted dozens of times that staying in Afghanistan was not in America’s national security interest and that he will not ask Americans to die to fight the civil wars of others, could have been given by Donald Trump himself.

What they are all silent about, however — Republicans and Democrats alike — is that after 20 years of imperialist occupation with bipartisan support, they left behind a devastated country. It is the U.S. state that bears primary responsibility for the war crimes committed in Afghanistan over the last 20 years, including those atrocities committed by the Taliban.

Jimena Vergara is an author of the collection "Mexico en Llamas" and lives and works in New York City.